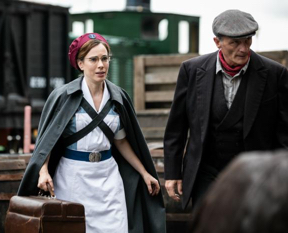 The sixth season of the BBC’s Call the Midwife, from 2017, featured more portrayals of expert nurse midwives saving lives and improving outcomes in an underserved London community in the 1960s. The nuns and lay midwives of Nonnatus House confronted a wide range of health issues, managing the effects of various social problems, especially those reflecting the experiences of women.

December 2017 – The sixth season of the BBC’s Call the Midwife featured more portrayals of strong, expert nurse midwives saving lives and improving outcomes in early 1960s London. In every episode, the nuns and lay midwives of Nonnatus House provided vital care, not just delivering babies but confronting a wide range of health issues in their underserved urban community, following the holistic nursing practice model. The midwives also dealt with the effects of various social problems and changes, especially those reflecting the experiences of women. These ranged from female genital mutilation to women’s growing opportunities to work outside the home. Among the powerful plotlines this season were nurse Trixie helping an expecting mother to address dental problems that were so severe they were endangering her baby; Shelagh providing good emergency care after a dockside warehouse explosion and then advocating effectively for safety improvements at a coroner’s inquest; and Sister Julienne managing to reunite part of a family shattered by a legacy of patriarchal abuse. Call the Midwife remains the best show on television for nursing. We thank creator Heidi Thomas and all those responsible for the show.

The sixth season included many story lines highlighting the nurse-midwives’ expert technical and psychosocial care. In the eighth and final episode of the regular season, one plot focused on a woman who had three daughters and was glad to rely on the newly-available contraceptive pill so she could get back to work she loved selling high-end garments. Her husband was unaware of her views on this; he still wanted a son. Unfortunately, the pill combined with the woman’s cigarette smoking resulted in a pulmonary embolism (blood clot), which the physician Patrick diagnosed after the woman collapsed. The clot led to her hospitalization and death. Confronted with this, lay midwife Trixie provided great technical and psychosocial care at the hospital. She clearly and calmly explained the health situation to the stunned husband and gave strong, sensitive support to him and the kids. Trixie also arranged for and managed their last visit with the dying woman. She even applied make-up to the unconscious mother, so she would look her best, and so as to allay the husband’s fears that her appearance would frighten the children.

In the other main case in that episode, nurse Shelagh finally had her own baby after a difficult pregnancy, with the Nonnatus supervisor Sister Julienne providing midwifery care. Julienne displayed technical expertise and gave great support. She encouraged Shelagh to sing! And she dispensed her usual wisdom to ease Shelagh’s pain and worries that she would not be strong enough to bear her child. In the end, Shelagh let her husband Patrick, the physician, assist by holding her as Julienne delivered the baby—an affirmation of the expertise of midwives in childbirth, even when a physician is available.

Another plotline highlighting the range of the nurses’ clinical skills appeared in the Christmas episode aired this month. In that one, a poor young couple had recently arrived in London. The woman was pregnant by another man, but her current man still seemed devoted. The newish midwife Valerie projected a lot of confidence, expertise, and good humor in her prenatal care. She ended up delivering the couple’s baby about a month early in the shabby trailer where they were staying. But the baby seemed to be stillborn, despite Valerie’s vigorous efforts to revive it. Valerie was distraught, but she managed to provide some comfort to the couple. Later, while Valerie was carrying the infant back to Nonnatus for eventual burial, she heard a cry from the basket. The baby was alive and would survive. It was a kind of Christmas miracle, one that reflected the Nativity story – the young pregnant couple down on their luck, recently arrived and barely able to find anywhere to stay, the father who was not the biological father, and a kind of resurrection, which seemed to redeem the despondent parents and midwives. But regardless of those spiritual overtones, Valerie was also presented as giving strong physical and psychosocial care.

Some plotlines highlighted nursing advocacy, an element of the profession that even well-intentioned portrayals do not always include. In the second episode, Shelagh was passing by a dockside warehouse when it exploded and caught fire. She rushed to help, taking charge of the care of the injured, along with Valerie, an ex-Army nurse who also happened to be nearby. (This was how Valerie first encountered the Nonnatus nurses; later they persuaded her to join their practice.) At least one person died in the warehouse fire, but the nurses managed to save the husband of a Nonnatus patient. He was left blind, though, and he was bitter at first. At the coroner’s inquest, Shelagh was called to testify. She was apprehensive, but she argued effectively for health supplies, including water, to be available on the docks in the event of accidents. She even persuaded the blind husband to testify. It was not clear, but the result seemed to be policy recommendations for more safety measures.

In that same episode, Patsy and her girlfriend, the hospital nurse Delia, advocated on behalf of a couple of short stature. The woman was pregnant, but she had had trouble in the past, and physicians had suggested that she terminate future pregnancies because of the risks. But she was determined and the midwives were supportive, especially Patsy. The woman was scheduled for a Caesarian section. Patsy fought through some needless restrictions imposed by the temporary Nonnatus supervisor Ursula to ensure that her patient saw a supportive face at the hospital and had other logistics handled. After the birth, Delia encountered some junior physicians who seemed to have wandered in from Grey’s Anatomy, gabbing and gawking at the new mother and her family. Delia ejected them, noting that the mother was not a “specimen.”

Not all of the midwives’ advocacy was an obvious success. In the sixth episode, the main clinical case involved a Somali woman whose female genital mutilation (FGM) and related sewing baffled the midwives and the physician Patrick. The woman was scared by the idea of cutting at the hands of some male hospital physician, so when her water broke, she tried to give birth on her own at home. By the time nurse Valerie got to the mother, she was far along, and she gave birth in the ambulance on the way to the hospital. Valerie had to cut the woman to allow the baby out. There was a lot of bleeding and the woman was hospitalized. The woman did not appreciate their help; she said she would never feel normal because the physicians had not stitched her back up the way she had been. Later, the midwives learned that the woman had sent her younger sister back to Somalia to have the FGM. The midwives judged her. But the woman righteously told them that in fact women, not men, control the mutilation back in Somalia. She also pointed out that, unlike many women in the U.K., she had not taken a man’s name. The episode voiceover did note that the woman ultimately choose not to subject her own daughter to FGM. The plotline seemed to suggest that, among other things, it can be hard to see positive effects of some efforts at nursing advocacy.

The season also highlighted the benefits of the nurses’ holistic approach to care, and the threats that approach faced even in the 1960s. Plotlines in the third episode addressed the potentially deadly effects of managed care, nurse understaffing, and the undervaluation of district nursing. The main plotline involved a traditionally-minded woman who insisted that her daughter-in-law stay in bed for a month with her newborn girl in oppressively warm conditions. At the same time, nurse Barbara did not have time to fully evaluate this baby or the home environment, laboring as she was under the supervisor Ursula’s rigid 20-minutes-per-visit rule. Later, the baby was unresponsive. The controlling mother-in-law rushed her to the nearby family clinic, where Shelagh and Patrick resuscitated her. It turned out that a defective flue on the home’s heater was leaking gas, poisoning the infant. Nurse Phyllis confronted Ursula, who was wracked with guilt and remorse, eventually leaving Nonnatus. Evidently her former place of work had been closed for inefficiency and she was determined not to let that happen again. Meanwhile, Patrick and Shelagh were busy defending the funding of their clinic, a four-bed family clinic providing pre-natal, birth, and post-natal care—as well as emergency care, obviously. The nurse-physician duo impressed a visiting inspector, but they seemed to be going against the tide of history, and the best the inspector could do was to recommend keeping them open for the near term. Managed care cost-cutting and bureaucracy appeared to be a threat to community-based nursing models.

In the fifth episode, a local mother was pregnant with her fifth child, but her real challenge was a painful mouth. She had abscesses and rotted teeth, apparently due to her phobia of dentists. Among the risks here was an elevated blood pressure, a sign of the deadly pre-eclampsia, which could threaten the fetus and the mother. Trixie eventually persuaded the mother to see a dentist from the clinic. All of the patient’s teeth had to be removed. Trixie held the mother’s hand, literally, through all of that. And when the woman’s water broke as she was recovering from the dental surgery, Trixie expertly delivered the baby as the dentist monitored her mouth bleeding. All went well, and the woman was thrilled with new dentures. It was Trixie’s persistent, holistic approach that made all of this possible.

Finally, in the Christmas special, one of the main clinical plotlines began with an older man who came to Patrick for help with a leg wound. He seemed like a decent guy, friendly and polite. Later, in the midst of the legendary Big Freeze of 1962-1963, he was found dead in a snowdrift, and that seemed tragic. But when Sister Julienne went to break the news to his widow, it gradually became apparent that the man had been a monster, physically abusive to his family, driving his son away (he died in World War II), repeatedly raping and finally throwing out his own young daughter years ago. Julienne tracked down the adult daughter and found that she had re-made her life, with several of her own kids and many foster kids. But the daughter was very bitter, especially about her mother’s failure to protect her, and she strongly resisted any reunion.  But after a lot of effort and patience, Julienne finally persuaded the daughter to reconnect, tentatively, with her mother. It seemed to show the quiet power of sensitive psychosocial care.

Call the Midwife is somewhat remote from the modern care environment, and so some viewers may not consciously link these strong, bright, able women with modern nurses. But as long as the show keeps producing seasons like this, it remains a compelling portrayal of autonomous nurses saving lives with their own care model and health expertise.

Call the Midwife can be found on BBC One, PBS, Netflix, YouTube and many other stations and platforms.

See more of our analyses on our Call the Midwife page.

1 thought on “Nevertheless, they persisted”