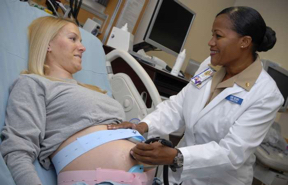 December 14, 2014 – Two strong pieces in the New York Times have recently drawn attention to the high quality, cost effective care that nurse midwives provide—and that they could provide much more of, with better support and resources. In a May 7, 2014 “Fixes” item, In Delivery Rooms, Reducing Births of Convenience, Tina Rosenberg explores at length why San Francisco General, despite being a public hospital, may be the safest place in California to have a baby because of its low rate of Caesarian sections (C-sections). Rosenberg identifies several key factors, mainly the use of salaried shift physicians, but she also cites the hospital’s reliance on autonomous, non-interventionist nurse midwives as well as the overall “clout” of nurses there. Today, the Times ran an editorial with the provocative headline, “Are Midwives Safer Than Doctors?” Based on a recent clinical assessment from the United Kingdom, the answer is yes, at least for low risk pregnancies. The editorial notes that the evidence shows midwives achieve better outcomes than physicians for such patients in all situations except first time births at home, at least in part because midwives are far less likely to use risky interventions such as C-sections, forceps deliveries, and spinal anesthesia. The editorial argues that certified nurse midwives should be given more autonomy and resources to expand their practices, and it urges support for pending federal legislation that would take steps toward that goal. Together, these two pieces make a good case for the long-overdue expansion of nurse midwifery practice in the United States, where fewer than 10% of births are now attended by midwives. We thank those responsible for these items.

Are midwives safer than physicians?

Rosenberg’s long In Delivery Rooms, Reducing Births of Convenience piece is part of the Times’ “Fixes” series, in which she and others discuss “solutions to social problems and why they work.” Here she explains that it might surprise people to learn that state data shows San Francisco General (right), the city’s “safety net” hospital and a long way from luxury, “is probably the safest place in California to have a baby.” She’s not talking about the hospital’s refusal to accept formula company swag, but its low C-section rate. Rosenberg explains all the risks and costs of C-sections, noting that most C-sections are probably not necessary. But they are done anyway for the convenience of physicians, and the rate of C-sections is rising quickly; it now accounts for one third of all U.S. births. Rosenberg says that probably the most important single reason for San Francisco General’s low rate is that physicians are “salaried and on shifts,” not paid per procedure, which means they have no financial or time-related incentives to do more C-sections. Rosenberg says that increasing the number of salaried physicians, including obstetric hospitalists, would not just improve maternal outcomes but increase quality and lower health care costs across the board.

Toward the end, Rosenberg notes that although nationally nurse midwives are still “rare,” attending only 7 percent of births, at San Francisco General patients having a “normal pregnancy” may choose a nurse-midwife as their primary caregiver under the hospital’s “autonomous nurse-midwife service.”

Nurse-midwives teach in the medical school in addition to the school of nursing. In the labor and delivery ward, nurse-midwives led a successful effort to greatly decrease the use of episiotomies and were co-leaders in developing new guidelines for [vaginal births after Caesarians]. The nurse-midwife service implemented Centering Pregnancy group medical appointments for prenatal care — the groups meet not in the hospital, but in community centers in the neighborhoods where General’s patients live… Ana Delgado, a certified nurse-midwife who is assistant director of inpatient obstetrics, said that midwives are trained in “the art of doing nothing, well. Patients get the message from the beginning: We will intervene when needed, but if you don’t need it, we don’t.”

The piece quotes Juan Vargas, the hospital’s “chief of obstetrics,” as saying that “a lot of us recognize that midwives are the real experts in labor.” Vargas notes that he is best at dealing with complications, so he stands by and practices patience. And Rosenberg cites one additional factor:

The clout of nurses at General is another way the hospital encourages labor to take its course. The hospital’s chief executive officer is a nurse, as was her immediate predecessor.

The “Fixes” piece might have explained a bit more how empowering nurses generally can improve care—so they can better act as checks on poor care and are more likely to have the time and resources to do their jobs, thereby saving more lives. But on the whole, it makes great points in a small space about the key role nurse midwives can play in improving obstetric care in the United States. The notes about the midwives’ autonomy, their teaching in the medical and nursing schools, their leadership in clinical reform, Delgado’s title, her quote about the “art of doing nothing, well,” and the quote from Vargas that the midwives are the “real experts in labor”—all of these are very helpful. And it doesn’t hurt to let the public know that nurses are capable of running large, complex health organizations like San Francisco General Hospital.

Are midwives safer than physicians?

Today’s New York Times editorial “Are Midwives Safer Than Doctors?” explains that the U.K.’s National Institute for Health and Care Excellence has found in a “clinical assessment” that “it is safer for healthy women with uncomplicated pregnancies to give birth under the supervision of midwives than in a hospital maternity ward run by doctors.” That is because physicians are “much more likely than midwives to use interventions like forceps deliveries, spinal anesthesia and Cesarean sections — procedures that carry risks of infection and surgical accidents.” For low-risk births, both mothers and babies fared better with midwives “in almost all settings, except for first-time mothers delivering at home.” (We suspect that does not relate to the quality of the midwives’ care; we doubt there was a comparison group of physicians delivering babies at home.) The Times goes on to argue that midwives should play a bigger role in U.S. childbirth, despite the “longstanding turf war” with obstetricians that “has tended to keep midwives under the thumb of doctors.” The editorial puts the U.S. midwife-birth figure at 9 percent, presumably including midwives who are not nurses. The piece says that three quarters of certified nurse midwives “work in physician practices or in hospitals where they interact with or are supervised by doctors,” but “they might well acquire more autonomy to handle low-risk, straightforward pregnancies on their own.” It explains that these midwives generally have at least a master’s degree, as well as clinical training and certification, and a “number of studies have shown that they do as well as or better than obstetricians in low-risk cases.” The Times notes that obstetrician groups cite evidence that planned home births carry higher risks of neonatal death, but some hospitals, like the Mayo Clinic, have given midwives more autonomy. The piece stresses that midwives can offer cost-effective care and greater geographical reach. It concludes by urging support for pending legislation that would require the federal government to “identify areas with significant shortages of [obstetric] professionals and take steps to plug the gaps,” a bill supported by the American College of Nurse-Midwives and the American Congress of Obstetricians and Gynecologists.

This editorial is persuasive and reasonable, despite the provocative title. It includes helpful data about the research showing the high quality of midwife care, explains why the U.K. assessment found midwives to be safer for low-risk births, and makes an argument for greater autonomy and support for nurse midwives that seems like simple common sense. The editorial even mentions a professional nursing association, rather than assuming that only physicians have those—which remains sadly common in the elite media. The piece may overstate to some extent how much U.S. nurse midwives lack autonomy now, but of course their practices are constrained in many settings and that should end. It would also be good if more U.S. residents became aware of the benefits of nurse midwives, who enable better maternal and neonatal outcomes in much of the developed world, as the Business of Being Born documentaries by Abby Epstein and Ricki Lake showed. Indeed, as the Times might have noted in this editorial, “low-risk” births are the vast majority of births.

We thank Tina Rosenberg and the New York Times for their helpful pieces on the life-saving value of nurse midwives.