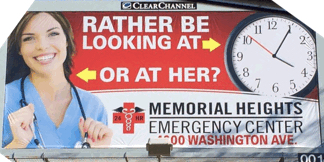 January 23, 2016 – Recently the Memorial Heights Emergency Center has placed at least one billboard ad in the Houston area that asks whether patients would rather be “looking at” a clock, or instead “at her,” with the “her” in question being an attractive young female “nurse” with a very big smile. Of course, the point is partly that this freestanding emergency department has shorter wait times. But the ad text and imagery also suggest that nurses are female objects to be ogled, rather than clinical professionals. If the Memorial Heights Emergency Center simply wanted to compare waiting a long time to getting health care, then the text should have been something like “looking at [a clock] or being seen by her,” and the image should have shown the nurse as a serious professional, not a beaming model. We even created below a version of the billboard for them that would not cause us to object.

Granted, the “nurse” is holding a stethoscope–although not like she’s ever actually used it–and the image is not particular sexual. But the ad still reinforces the enduring naughty nurse stereotype, which suggests that nurses are low-skilled helpers whose real purpose is to offer sex or romance to patients or physicians. We note that the Emergency Center is owned by physician Akash Bhagat, who has also boasted of his business’s refusal to employ nurse practitioners because they are trained “differently”. We urge the Memorial Heights Emergency Center to remove all advertising like this and to make amends for telling the public that nurses are eye candy.

This our archived petition on Change.org

After 3 days and 81 signatures, the managing director of the clinic, Jason Masvero, posted a response on the Change.org site trying to explain away his billboard. We did not find it convincing and he never did apologize, but he at least did ultimately take down the billboard.

Thank you for speaking out. Without your efforts and collaboration, we are sure the owner would not have yielded. Your voice has power. Thank you for using it to stop this instance of one of the most damaging stereotypes of nursing!