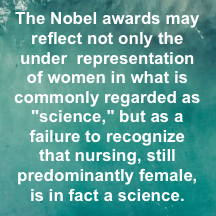 October 3, 2016 – Today the New York Times ran an op-ed by science writer Gabriel Popkin arguing that the Nobel Prize Committee should expand the scope of scientific endeavors eligible for the prestigious Prizes beyond the traditional chemistry, physics, and “physiology or medicine.” The op-ed was published to coincide with this year’s Prize announcements, starting with today’s award of the Prize in medicine to yet another cellular-level researcher. Today’s op-ed makes some of the same points as one Truth About Nursing director Sandy Summers made 10 years ago in a an op-ed advocating a Nobel Prize for Nursing written with nursing professor Kristine Gebbie. “Nurses’ achievements merit international recognition,” which appeared in the Baltimore Sun on December 8, 2006, argued that there should be a Nobel or equivalent prize in nursing, since nurses’ contributions to global health were as valuable as those made in medicine, although they tend to involve broader social and health systems rather than advances at the cellular level.

Popkin appears to be mainly concerned with contributions by those working on pressing environmental and population issues, and he does not mention nursing or any health discipline beyond medicine. But his main point is a comparable one, and we agree that the Nobel or some other major global prize should honor modern scientists beyond those in the limited categories of the current Nobel awards–including nurses. We also note that the awards may reflect not only the under-representation of women in what is commonly regarded as “science,” but also a failure to recognize that nursing, still predominantly female, is in fact a science.