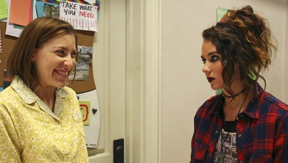 The Middle toys with angel and battle-axe imagery October 2016 – Two recent episodes of the ABC sitcom The Middle included appearances by Holly, a nursing student who presented a mixed but ultimately damaging vision of the profession. In the episodes, the Heck family’s hyper-cheerful daughter Sue was adjusting to her first year at college, and Holly was her roommate. Holly was assertive, articulate, and generally just about as far from the dimwitted and angel stereotypes of nursing as you could possibly get. She was also a junior getting her “nursing degree,” which told viewers that nurses get bachelor’s degrees in nursing. Unfortunately Holly was also a selfish, bitter jerk who admitted she did not like people and who seemed to have skipped ahead to battle-axe status before even getting out of school. Her sexual activity was not exactly naughty, but it didn’t show much respect for other people. Viewers were likely to agree with Sue that Holly should not be a nurse and to applaud Sue’s apparent success in getting Holly kicked out of the dorm. We realize that Holly’s link to nursing was just a plot device designed to exploit the comic potential of a character who was so far from the angel image of the profession. In using that device, though, show creators Eileen Heisler and DeAnn Heline not only stumbled into the battle-axe, but may have implicitly reinforced the angel image after all. Holly is funny because she seems to be the opposite of everything a nurse should be. That could suggest that nurses should be not merely considerate but also unduly deferential, completely selfless, and traditionally virtuous in their personal lives. And that doesn’t help nursing.

I don’t like people; I’m just here to get my nursing degree

I really don’t think she should be a nurse

I don’t like people; I’m just here to get my nursing degree

The show’s September 30, 2015 episode, Rich Dahm’s “Cutting the Cord,” is about Sue’s transition to life as a college freshman, living away from home for the first time. Sue is excited and enthusiastic, but also needy, innocent, naïve, and too-eagerly awaiting the arrival of her roommate, with whom she imagines she will do lots of freshman social activities. Days pass with no roommate. Sue burdens her parents with constant texts. She does eventually get invited to a dorm party, at which she is aghast to find that many students are political and hate America.

Then, late one night, Sue’s roommate Holly Haypek finally arrives, rolling her eyes at the peppy posters Sue has put on the walls. Holly looks in the fridge: “No beer?” Sue, undeterred by the fact that Holly is actually a junior and has missed most of freshman week, says they can still go to dorm mixers. But Holly says no one goes to those because “they’re lame.” Sue wants more guidance.

Holly: Yeah, OK. Freshman year sucks, sophomore year sucks, I’ll let you know about junior year, but it’s not looking good, I already got hosed in the housing lottery, I asked for a single. I’m going out.

Holly returns with a poster for their wall. It turns out to be just two huge words: “[blurred out] LIFE.” Sue says she would rather “love life,” but that’s what’s great about college, they can find some common ground–they both like posters and tape!

Holly: OK, listen. You seem like a nice enough person, but I’m gonna save you some time. We’re not gonna be best friends, or paint each other’s nails, or stand up at each other’s weddings, or get together with our husbands 20 years from now and remember the good times. It’s nothing personal against you. I don’t like people; I’m just here to get my nursing degree and get out of here. Now, my boyfriend’s coming over tonight, so…you can stay here and watch, but you can’t participate.

Sue says she will find somewhere else to sleep, but a resident assistant rousts her from the dorm lounge and even writes her up. Sue calls home in tears, complaining about Holly, who on top of everything else “called Taylor Swift a skank.” Sue hates college and wants to come home. Her parents plan a visit to try to address the situation. But in the meantime, Sue’s older brother Axl, who attends the same college, shows up and takes her for pizza, explaining that the first days away at college are hard for everyone. Their parents are very pleased with this sibling bonding.

I really don’t think she should be a nurse

The show returns to the plotline in the October 14, 2015 episode, Ilana Wernick’s “Risky Business.” Although Sue tells her parents the Holly situation is better, Sue’s high school friend Brad discovers that she is living in her car to avoid Holly. Sue confides that her roommate situation is “hell on Earth” because Holly is “mean and selfish. She wears my shower shoes even though they are clearly marked ‘Sue.’ She has her boyfriend over all the time and they do stuff, right in front of me. They took my bed so they could make one giant one. I had to sleep in my desk chair, and it has wheels. I was always waking up on the other side of the room and that is way more disconcerting than you’d think. It just seemed better to stay in my car.” Brad suggests that he pose as her boyfriend and turn the tables on Holly. They find Holly in the dorm room, making out with someone, and they try to engage in some inappropriate displays of affection of their own. But these are too tame and unconvincing (Brad seems to be gay) to have any effect on Holly; she asks them to shut up because her date’s girlfriend will soon return. Eventually they admit that, as Brad says, they “played sex chicken and lost,” and they leave.

Sue tries to put on a brave face, saying it’s only 134 days till summer and maybe by next year Holly will have a baby, and they’ll put her in married housing. Brad says there’s something he wants to tell Sue; presumably this is his sexual orientation. But Sue claims to know already, and they hug. Later, a voiceover by Sue’s mother informs us that Sue, inspired by Brad’s bravery and honesty, finally showed Holly she would not be pushed around. This apparently means tattling on Holly to the dorm’s resident assistant, which we see happen.

Sue: My roommate is a bad, bad person. She has her boyfriend over every night. There are multiple hot plate violations. She does very inappropriate things to kitten posters. And I don’t know if you have any jurisdiction over this, but I really don’t think she should be a nurse.

The final result is not clear, but Holly’s failure to reappear in later episodes certainly suggests that Sue managed to get her removed from the dorm room, if not the entire dorm system.

On the upside, Holly is clearly no angel. She is assertive and articulate, and she certainly does not seem destined to be anyone’s handmaiden. It’s helpful to counter the impression that nurses are just meek physician servants. And at least the episode makes clear that nurses attend college and get bachelor’s degrees in nursing.

But Holly also seems like an instant battle-axe. Granted, we never see her in a clinical setting and she has no authority over patients. Like a battle-axe, though, the character does arguably link malevolence and female authority, in the sense that Holly has social authority by virtue of her savvy and assertiveness. She is also a selfish, bitter person with no apparent regard for others; after all, she doesn’t like people. Holly’s sexual conduct is not really naughty in the stereotypical sense, but it does reflect indifference to her roommate’s sensitivities (if not delight in causing Sue distress) as well as to the feelings of her hookup’s girlfriend, who would clearly not be OK with the hookup, or else Holly would not have needed to worry about her return. This all sets Holly up in opposition to the nice ‘n’ meek image of nursing, which is why the show made her a nursing student in the first place. Of course, you don’t have to be an angel to be different from Holly. But no one could be more different from Holly than an angel, and some viewers may have that stereotype reinforced by implication: Holly’s qualities are completely counter to the natural order, including the parts of her persona that would actually be good for nursing, like strength and the ability to advocate. Maybe Sue, good-hearted but clueless, is the right model for nursing.

On the whole, although it’s refreshing that Holly is no pushover, the portrayal is a net loss for nursing.

Please send your thoughts on nursing and nurse stereotypes to The Middle‘s creators and executive producers Eileen Heisler and DeAnn Heline on Twitter @EileenHeisler and @DeAnnHeline. Thank you!