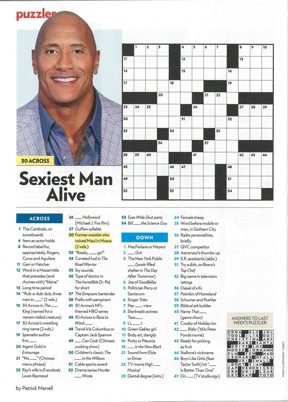 March 14, 2017 – The clue for 29 Down in People magazine’s crossword “puzzler” this week was “E.R. assistants (abbr.),” seeking a 3-letter answer. Can you guess it? Yes, it is “RNs.” In fact, though, nurses are autonomous professionals who use their advanced skills to save lives and improve patient outcomes. They do not “assist” physicians, but instead manage their own distinct health science profession, based on university educations provided by nursing scholars. This crossword appeared almost exactly 10 years after the New York Times puzzle sought the answer “RNs” with the clue “I.C.U. helpers,” in its February 27, 2007 edition. “Assistants” seems slightly less bad than “helpers,” so maybe that is progress! In any case, research shows that the entertainment media has a real effect on health care views and actions. People’s circulation is about 3.4 million, with an estimated readership of more than 40 million people. And although the puzzle is mostly about celebrity culture, we are confident the magazine wants its readers to regard the information in it as accurate. Sadly, the most common entertainment media image of nurses is that they are “assistants” to physicians. Please urge People magazine and the crossword’s creator Patrick Merrell to apologize in a future issue and to make amends by offering clues that reflect the true nature of nursing—like “E.R. experts” or “patient advocates.”

What do emergency nurses do all day?

Emergency department (ED) nurses follow the holistic nursing practice model, autonomously triaging incoming patients, performing critical evaluations, providing or coordinating the treatments these patients require, monitoring the patients using advanced technology, giving education and psychosocial support to families, and consulting with practitioners including physicians about care plans. ED nurses do not “assist” physicians. We suppose it is possible to interpret the puzzle clue as suggesting that ED nurses “assist” patients. But we doubt many will understand it that way. And that would still be a dismissive way to summarize what emergency nurses do to keep patients alive. ED “experts,” “advocates,” or “guardians” would be closer to the mark.

Of course, to describe nurses as “assistants” is consistent with the prevailing media conception of their work, particularly that displayed on influential prime time television dramas such as ABC’s Grey’s Anatomy. Such shows typically portray physicians as the main force in hospital care, while nurses are subordinate clerks—yes, “assistants”—when they appear at all. Such messages are not lost on society (including its puzzle creators) simply because they are embedded in entertainment television, as public health research confirms. And crosswords are no different.

Click here to join us in encouraging People magazine and Patrick Merrell to apologize and make amends for this clue by running others that reflect the central, expert role skilled nurses actually play in patient outcomes.