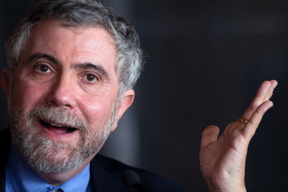 April 15, 2017 — On February 24, Paul Krugman posted a short item on his New York Times blog listing “nurses” as one example of those who perform “menial work dealing with the physical world.” The prominent Times columnist argued that such jobs will likely prove relatively resistant to technological displacement, contrasting them with work that has traditionally required college and observing that “the point about the relative displacement of cognitive versus manual jobs seems to stand.” We’re used to this sort of stereotyping from talk show hosts, late-night hosts, Hollywood producers, and other media figures. But Nobel Prize-winning economists whose work requires an awareness of labor markets? In fact, nursing is a distinct health science, and all nurses need several years of university education. Hundreds of thousands have graduate nursing degrees. Nursing includes complex drug calculations and patient surveillance as well as advocacy, teaching, public health, and other “cognitive” roles. Extensive research shows that better nurse staffing saves lives and improves patient outcomes. Most types of nursing do include physical tasks, and it remains common to assume that the most seemingly “manual” of those–touching a patient or cleaning up–are all the profession is. But even those tasks are linked to nurses’ advanced skills, such as psychosocial care or assessing a critical patient’s minute-to-minute status. For almost two decades, the world has suffered from a deadly nursing shortage driven in large part by the kind of stereotyping that Krugman’s blog post exemplifies. Krugman teaches at the City University of New York’s Graduate Center, and our thought was that his colleagues at the Graduate Center’s Doctor of Philosophy in Nursing program–scholars with doctorates in nursing–could provide him with information about whether nursing is “menial.” In any case, the Truth and a small group of supporters (who we rallied from our Facebook group) urged Krugman to publicly apologize, and yesterday he did so on his blog, explaining that he does in fact understand the level of cognition nursing requires! We thank Professor Krugman and urge him to go on to use his blog or column to explain the place of nursing in the economy, including the stresses that current health care financing systems place on the profession and the key role nurses can play in maintaining and expanding access to high-quality care.

Dealing with the physical world

Krugman posted the item “Maid in America” on his blog, “The Conscience of a Liberal.” The basic idea of the post was that “much recent innovation, instead of displacing manual workers, has displaced high-paying skilled jobs.” Krugman said that he “sort of” predicted this would be the case 20 years ago in a piece for the New York Times magazine.

“I argued then that menial work dealing with the physical world — gardeners, maids, nurses — would survive even as quite a few jobs that used to require college disappeared. As it turns out, big data has led to more progress in something that looks like artificial intelligence than I expected — self-driving cars are much closer to reality than I would have thought, and maybe gardening robots and post-Roomba robot cleaners will follow. Still, the point about the relative displacement of cognitive versus manual jobs seems to stand.”

Nursing does “deal with the physical world” and have “manual” elements, but as we have explained, it is not “menial” work. Indeed, the same things about physicality could be said of what physicians do, especially the emergency and surgical specialties that are so popular with Hollywood. But medicine does not seem to have occurred to Krugman as a handy example of manual labor.

Nurses now face understaffing and inadequate support for education and research, endangering patients worldwide. And that public health crisis has been driven by uninformed stereotyping in influential media, which helps to perpetuate the undervaluation of the profession. Research shows that the media affects health-related views and actions. It has an especially strong effect on career seekers–what will high school seniors make of Krugman’s comments? And it should be clear by now that the mass media also plays a key role in forming the views of decision-makers at the highest levels. Krugman’s assumptions about nurses surely reflect how many of those leaders think. If he doesn’t know any better, why would CEOs or public officials?

Incidentally, we see the irony in arguing that nursing should be considered one of the “skilled,” “cognitive” jobs that may be more susceptible to technological displacement. Perhaps nurses should embrace only the physical aspects of their job and try to ward off an onslaught of “robot nurses”–a term we have often heard incorrectly applied to simple health-related machines that can, say, recognize voice commands and hand surgeons instruments. But we think nurses will just have to take their chances as skilled workers, along with the physicians and economists. In fact, a February 2017 editorial in the journal American Nurse Today discussed the growing use of robots and information technology in nursing, arguing that although robots are now able to do an increasing number of care tasks, they cannot make the ethical and clinical decisions nurses do, particularly in ambiguous situations. We agree that there is a lot of nursing that no robot can do, ranging from nurses’ roles in advocacy, teaching, and public health to many combined cognitive and “hands-on” tasks, such as those involved in patient assessment, that many people wrongly assume are “menial.”

In any case, on April 14, as we were preparing to expand our letter-writing campaign through this news alert, Krugman appeared to notice that nurses were starting to write to him about the February 24 blog post. He quickly issued the following apology and explanation on his blog:

In Praise of Nursing

For some reason I’m suddenly getting a lot of mail about a sloppy and insensitive thing I did in passing in a blog post a while back. I was writing about what kind of work would survive digital technology, and described nursing among other things as “menial” work. What’s odd is that I have never imagined that; I don’t remember what I was thinking, but I may even have meant to say “manual” (which is also not right, however, since there’s a lot more than manual skill involved).

Anyway, apologies to nurses: If I insulted them, even inadvertently, that was badly done. I’m well aware how much training goes into their profession, and also just how hard it is — I would be terrified to deal, even once, with what they deal with every day. I won’t make that mistake again.

We always appreciate an apology after someone in the public spotlight degrades nursing, especially when it is made in the same forum as the original communication (rather than some lesser-seen one) and when accompanied by some expression of “how much training” the profession requires. The apology would have even more value if Professor Krugman were to make amends by using his considerable influence to highlight the ways in which nursing plays a role in his areas of focus as a columnist. We asked Professor Krugman to collaborate with nurses in addressing how current health policies undervalue the nursing profession and the harmful effects of that undervaluation on the public and the economy. Healthcare errors are the third leading cause of death in the U.S. in large part because of the undervaluation of nursing and underinvestment in nursing education, practice, research, and residencies. At the same time, nursing has played and can continue to play a key role in expanding access to high-quality care, as the Affordable Care Act (Obamacare) envisions. Professor Krugman can use his stature to help explain these issues to decision-makers who control how health care resources are spent. We sent Professor Krugman a letter and he apologized. Thank you for your help! It took about 20 letters to get his attention. See his apology “In Praise of Nursing.”

For references purposes, our original letter to Paul Krugman is below:

Please reconsider your February 24, 2017 New York Times blog post listing “nurses” as an example of those who perform “menial work dealing with the physical world.” You contrasted nursing with work that has traditionally required college, and you observed that “the point about the relative [technological] displacement of cognitive versus manual jobs seems to stand.”

Most types of nursing include physical tasks, such as touching a patient, but even those tasks tend to be linked to nurses’ advanced skills, such as psychosocial care or assessing a critical patient’s minute-to-minute status. For almost two decades, the world has suffered from a deadly nursing shortage driven in large part by the kind of stereotyping that your blog post exemplifies.

I understand that you teach at the City University of New York’s Graduate Center. Perhaps your colleagues at the Graduate Center’s Doctor of Philosophy in Nursing program-scholars with doctorates in nursing-could provide you with more information about what nursing really is.

Please publicly apologize to nurses, and explain the true place of nursing in the modern economy. Thank you.

Thank you for joining us in conveying this message!  After about 20 emails to Professor Krugman, he issued his apology “In Praise of Nursing.”