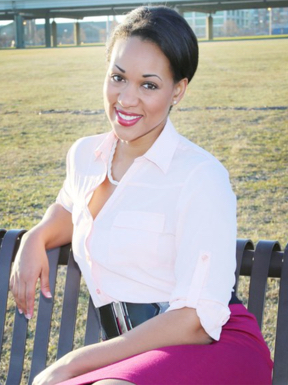 May 2017 – Recent media items have profiled a rising figure in Kentucky nursing. In November 2014, Glamour magazine ran a substantial feature entitled “Hometown Heroes: 50 Phenomenal Women of the Year Who Are Making a Difference.” Emily L. Foley’s piece briefly described one woman from each U.S. state. For Kentucky, it was Planned Parenthood nurse practitioner Ashley Miller, who had entered a PhD program to research better ways to educate her patients about reproductive health. (She has since received her PhD.) The profile also noted that Miller recently ran for state representative to try to effect related policy changes. Although she did not prevail, she was determined to continue advocating for her community; that was why she “chose nursing and to engage in research and public policy [in the first place].” The short piece made some great basic points: that nurses can be leaders in advocacy, policy, and research, and that their holistic care model has a focus on patient education. And a pre-election MSNBC report by Irin Carmon, which aired on November 2, 2014 in a segment hosted by Melissa Harris-Perry, highlighted some challenges Miller faced in her run for office, in which she ultimately received 46.7% of the vote. That piece, “Young candidate facing racist, sexist attacks,” also explained that Miller grew up in Louisville as the “daughter of then-crack addicts” who were sometimes short on food. Even so, the report noted, Miller had the support of her grandmother and she managed to excel at basketball and beauty pageants. At that time, her nursing involved trying to help girls “in whom she [sees] herself.” And she had hoped to draw on her study of evidence-based practice in nursing to enact some “evidence-based legislation.” A quick look at Miller’s current website gives a sense of her versatility and ambition. The site describes her as a “business owner + nurse + scientist + athlete + health professional + political figure + motivational speaker + international model + beauty queen.” (Her surname is now Anderson, as she has married former NBA player Derek Anderson.) We thank Glamour magazine and Emily Foley for these items.

The Glamour item’s photo shows a well-dressed Miller sitting on a bench in front of what seems to be a park, albeit one that is dominated by a highway overpass. The complete text:

As a nurse practitioner at Planned Parenthood, Ashley Miller, 30, was shocked at how little many of her female patients knew about their reproductive health. She decided to enter a Ph.D. program to research better ways to educate women about their health—then decided to run for state representative so she could implement the changes she so badly wanted to see. Though Miller lost her bid for state representative, she plans to continue to advocate for the people of her state. “My calling is to serve my community. That’s why I chose nursing and to engage in research and public policy [in the first place].”

This is a short piece, but Glamour’s U.S. circulation is more than two million, and the item does a lot given its constraints. It tells readers that nurses are engaged with their communities in ways that we rarely see in the mass media—as researchers, policy voices, and advocates. And it highlights nurses’ goal to promote health holistically by empowering patients through education, a key preventive approach. Of course more detail would have been better, but we realize space was limited. It is notable that Miller, a candidate in the November 2014 general election, did get 46.7% of the vote in what appears to be a swing district.

In addition, as the pre-election report from MSNBC made clear, Miller is an articulate, compelling figure who caused electoral opponents enough concern that she was the subject of apparently false suggestions that her modeling work included sex work and associated her with “gangster rap.” The piece also includes this description of Miller’s background:

Growing up in the West End of Louisville as the daughter of then-crack addicts, Miller’s family sometimes lacked electricity. “There was some times we didn’t have food,” Miller said. “There were times my dad would get food from a dumpster or would steal it from a local Thornton’s up the corner.” Support from her grandmother, as well as competing in pageants and playing basketball, helped Miller find her way. When she found herself at Planned Parenthood working as a nurse practitioner, she realized she had found her calling, helping girls in whom she saw herself. “I felt like I was really able to empower girls with information about their bodies to really help them be in control of their fertility,” she said. Miller is still juggling hours at the clinic with the campaign – and finishing her doctorate in nursing. She hopes to bring some of that real-life experience and empirical background to the legislature. “In nursing we always talk about research-based practice, evidence based practice,” Miller said. Her hope, she said, is for some “evidence-based legislation.”

This passage has the virtues of the Glamour item, in terms of associating nursing with health advocacy and policy leadership, but it also shows how much adversity Miller has overcome and includes her amusing comment about “evidence-based legislation.” The only quibble we have with the piece is that Miller didn’t just “find herself” at Planned Parenthood “working as a nurse practitioner.” It took a master’s degree in nursing from the University of Louisville for her to be able to practice as a nurse practitioner.

On the whole, these pieces tell the public some very helpful things about the potential of nursing. We thank Glamour and MSNBC for their reports.

Archives of the Glamour and MSNBC pieces.