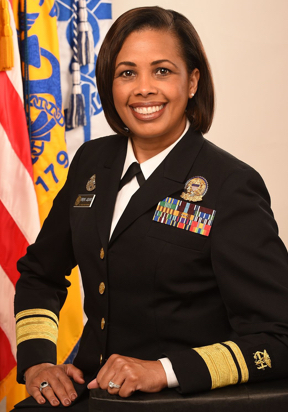 June 29, 2017 – With today’s announcement that Indiana health commissioner Jerome Adams, MD, has been nominated to be U.S. Surgeon General, it appears that the tenure of Rear Admiral Sylvia Trent-Adams, RN, PhD, as Acting Surgeon General is drawing to a close. Still, her months on the job have sent a helpful message about nursing. On April 21, news entities reported that Trent-Adams, the former U.S. Deputy Surgeon General, had become Acting Surgeon General, after the apparent firing of Vivek Murthy. Many of these press accounts briefly described Trent-Adams’s ample qualifications, although they generally seemed to convey some surprise that a nurse was becoming Surgeon General. The New York Times piece was headlined “Nurse Replaces Surgeon General After Obama Appointee Resigns.” Some saw condescension there, and it’s true that Trent-Adams’s professional status was made an issue in a way that would not have happened had her background been different. In fact, the work of a Surgeon General is in public health, not surgery, so the title is misleading even for a physician holding the office. Many news items noted that Surgeon General Richard Carmona, who served from 2002-2006, was both a nurse and a physician, so Trent-Adams is the first nurse to hold the post who is not also a physician. The rest of the Times article, by Danielle Ivory and Gardiner Harris, focused on the drama surrounding Murthy’s apparent dismissal, with reference to past Surgeons General whose outspokenness did not endear them to sitting presidents. But it also gave a short account of Trent-Adams’s achievements, which include 25 years with the Commissioned Corps of the U.S. Public Health Service (USPHS). It was not clear at that time who would fill the permanent Surgeon General position or what effect these events might have on the ongoing movement to create a National Nurse for Public Health office within the USPHS. Indeed, the mainstream press accounts did not note was that Trent-Adams has been a strong advocate for nursing.

For instance, in her May 9, 2017 commencement address at the UTHealth School of Nursing, Trent-Adams reportedly urged the new graduates to play active roles in the most pressing public health issues, according to Rob Cahill’s May 17 account on the Texas Medical Center News website. And in a January 10 speech to the Vanderbilt University School of Nursing, Trent-Adams described nurses as “the power force that can change health care delivery in this country,” according to a February 1 report on the school’s site. Trent-Adams added that nurses must make their “voice heard for the nursing profession. Because we don’t need medicine, pharmacy or dentistry telling us what’s appropriate for nursing in practice, in leadership or in scope of practice.” The headline of the Times piece, “Nurse Replaces Surgeon General After Obama Appointee Resigns,” was fairly typical of mainstream accounts. They generally reported the news without any overt criticism of or contempt for Trent-Adams’s nursing status, but they clearly did regard that status as at least notable. Of course, to the extent Trent-Adams is the first nurse to ever hold the post who is not a physician, that is news and may well deserve to be noted in a headline. And in fairness, perhaps just saying “nurse” is understandable, since “first nurse” would not be accurate, and it might be difficult to fit “first nurse not also a physician” in a headline. Some observers, viewing the news through a highly political lens, thought they detected bias against the Trump Administration in the way the Times and other mainstream media delivered the news, which led those observers to actually defend a nurse’s qualifications to be Surgeon General.

The Times piece was mostly about Vivek Murthy’s departure and whether it was the result of his past statements that gun violence was a public health problem. The article also went briefly into the history of Surgeons General taking public stances that displeased the White House. The piece did note that Trent-Adams was “one of the first nurses to serve as surgeon general,” explaining that she “may be the first surgeon general who is not a physician,” in light of Carmona’s dual status. And the report closed with this somewhat dry paragraph about Trent-Adams’s background:

Admiral Trent-Adams received a Ph.D. from the University of Maryland. She was a nurse officer in the Army and also served as a research nurse at the University of Maryland. She joined the Commissioned Corps of the Public Health Service in 1992 and served as the deputy associate administrator for the HIV/AIDS bureau of the Health Resources and Services Administration before joining the surgeon general’s office.

The piece did not speculate about whether Trent-Adams might be nominated for the permanent position, nor did it offer further information about what kind of public health advocate she might be. The piece might have noted, as the American Nurses Association did in its April 26 press release congratulating Trent-Adams, that she served as the Chief Nurse Officer of the USPHS from 2013-2016, and that she became a Fellow in the American Academy of Nursing in 2014. Neither the Times nor any other account we saw noted that her PhD is in nursing—something to which the USPHS’s online biography may have contributed, since it lists her as having a “Doctor of Philosophy,” which does not exactly give nursing credit as a profession in which one can earn a PhD. We have been working, so far without success, to persuade USPHS to clarify that Trent-Adams’s PhD is in nursing. So:

Please click here to see Sylvia Trent-Adams’s biography, and to start a survey by the HHS, please encourage them in the open-ended comment boxes to change the “Doctor of Philosophy” language in her bio to “Doctorate in Nursing” or something equivalent. Thank you! In any case, a quick look at Trent-Adams’s public statements suggests that she is a strong public health advocate, certainly on behalf of the nursing profession. UTHealth’s account of her early May 2017 commencement address in Houston reported that she urged the graduates to (in the piece’s words) “play active roles in the interprofessional health care teams that are tackling opioid abuse, chronic disease, suicide and the other major medical issues of the day.”

You need to take your place at the table where you are. You are the future of health care. I wish I could tell you that the road will be easy. There will be times when you question your competence. But, you would not be here if you were not made of the right stuff. … You need to be the voice of the profession.

At the Vanderbilt event in January 2017, while Trent-Adams was Deputy Surgeon General, she was reportedly even more direct.

If you hear nothing else that I say, please know that the take-home message from my entire talk is I believe that nurses are the power force that can change health care delivery in this country. I think that the knowledge and experience and the passion that is in this room can have a dramatic impact on the future of health care not only for this country but for the world. … Nurses have the strongest stance in health care: being an advocate for patients. Nurses are putting hands on patients more than any other provider in the system. You have your finger on the pulse, both from a policy perspective and a clinical perspective. … Nurses can share their knowledge about how much care actually costs. How many nurses does it actually take to get through the night shift? How many nurses are required to staff a given outpatient facility? How many health care providers, both special and allied health, are required to run a nurse-managed clinic?

Trent-Adams went on to note that nurses have been policy leaders in the past—“she outlined instances in which Florence Nightingale, Harriet Tubman and Clara Barton changed the health policy of their times”— and she urged nursing leaders to be aware of the challenges they face.

We have to make sure from a policy perspective that we take control of making (nursing’s) voice heard for the nursing profession. Because we don’t need medicine, pharmacy or dentistry telling us what’s appropriate for nursing in practice, in leadership or in scope of practice. …  Be members of our professional organizations but also be active in the community. Make sure that you are engaged in the policy process and making decisions on boards, serving on committees, serving on taskforces and using every opportunity to display that your training and education have trained you well to be at the table and to make those decisions.

This is some strong advocacy for nursing, even addressing difficult issues like staffing levels and scope of practice. And although it appears that Trent-Adams’s tenure will end soon, assuming Jerome Adams is confirmed to the permanent post, the nursing leader’s selection and tenure as Acting Surgeon General has shown that nurses can hold public health positions at the highest levels.