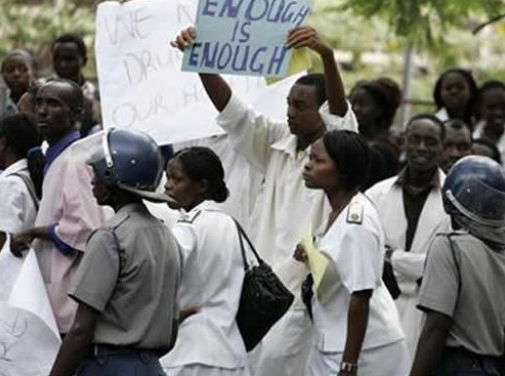 Reports from Zimbabwe show lack of resources for nursing

May 2015 – This month news items from Zimbabwe showed that the salaries of nurses in some settings remain absymally low. On May 6, a short Associated Press piece reported that night shift nurses at the nation’s public hospitals had gone on strike in protest of a pay rate of “$3 for a seven day nightshift”—really. (No, the cost of living in Zimbabwe is not so low that anyone could live on that.) The striking nurses were asking for a raise to $150 per week. Normally, a 5,000% raise might seem like a lot, but… The nurses’ union representative Enock Dongo said that nursing students had been forced to “fill in” during the strike, which had lasted a week at that point. Of course, nursing students are not yet licensed nurses, and so they can’t adequately “fill in.” Ten days later, on May 16, the New Zimbabwe website reported that the nationwide strike had been resolved. The nurses had agreed with the government on a pay raise to $70 per week. The publication included comments from Health Services Board chairperson Dr. Lovemore Mumbengeranwa, who actually said that the nurses’ “concerns were genuine; considering what they do the pay was too little.” Mumbengeranwa also stated that the nurses are now “paid well” “depending on one’s grade,” but he conceded that “we still feel it’s not enough.” Evidently the situation had gotten to the point that some hospitals had to refuse new patients. These items might have given details about what nurses do for patients and why hospitals cannot function without them. And it might have been helpful to explore the causes of the lack of resources for nursing, including the undervaluation that is reflected in things like the term “student nurses,” as well as the effects on patients and potential long-term solutions. But the pieces certainly call attention to the basic issue. We thank those responsible for them.

The short AP item is “Striking Zimbabwean nurses refuse to work nightshift.” It reports that nurses at the southern African nation’s public hospitals and clinics have gone on a nationwide strike to protest the low salaries. The piece notes that the nurses are “demanding” a rate of $150 for the weeklong shift. The item also says that the strike has lasted a week and that the nurses’ union has threatened that “nurses may stop working completely” if an agreement is not reached. The piece briefly quotes union representative Dongo (other information indicates that he is the Zimbabwe Nurses Association’s chairman for Harare province). Dongo describes the current pay rate of $3 for the week as “a mockery.” He also reportedly says that (in the piece’s words) “student nurses have been made to fill in during the strike.” Of course, nursing students are not “nurses” any more than medical students are “student physicians”—a term we rarely hear—so they are not yet qualified to act as registered nurses, who make life-and-death decisions. The use of the term “student nurses” implies that the profession doesn’t really require much education or skill, as if you can kind of be a nurse the moment you start nursing school. In any case, the piece closes by noting that Health Minister David Parirenyatwa says negotiations are progressing. on the New Zimbabwe site is “Govt.: Nurses strike was justified.” And that certainly is a concept worthy of a headline—that a management representative would admit that a nursing strike was justified. The actual quote from the Health Services Board chairperson Mumbengeranwa is a little less direct. At an “MSF/Doctors without Borders official launch of scientific findings on cervical cancer screening in Harare,” he reportedly addressed the nurses’ strike this way:

Their concerns were genuine; considering what they do the pay was too little. So we managed to get something from treasury for them. Now, depending on one’s grade, they are being paid well. We still feel it’s not enough but we all know the financial environment in which we are all living in. The Government is willing to improve the figures resources being made available. We note that there is some irony in this testimonial from a physician; are there any nurses in positions of government authority to negotiate with the striking direct care nurses, since nurses would generally be more qualified to address nursing issues? That irony is not lessened by the glancing reference to MSF, an organization whose name still suggests it is solely a physician group even though it has long been the case that more nurses than physicians work for it. So it is unfortunate that physicians get all the credit for MSF’s work, which led to its 1999 Nobel Peace Prize. In any case, the Zimbabwe piece again explains the difference between the pay the nurses were getting and what they were after, noting that “they settled for $70 per seven-day shift, a figure which was also endorsed by the Health Services Board.” The item also notes that the nurses were “complaining of the unfair grading system, an issue which they said had been on the agenda since 2010.” The piece does not explain the exact nature of that concern or whether the government promised to address it. The piece closes by noting that the “situation had gone out of hand to the extent that referral institutions like Harare and Parirenyatwa hospitals were no longer taking in new patients from local clinics,” which at least implies that hospitals cannot function without nurses. Both of these pieces are helpful in that they highlight the terrible underpayment of these nurses, as well as the lack of sufficient resources for nursing generally. The pieces also contain some subtle hints about the undervaluation of nursing that drives these problems. The items might have addressed that undervaluation directly and explained what nurses do that justifies more resources—why non-nurses can’t just “fill in” for them and why hospitals would have to close without nurses to keep patients alive. Still, the pieces have a powerful message.

“Striking Zimbabwean nurses refuse to work nightshift” by the Associated Press on May 6, 2015.

“Government Nurses strike was justified” posted on the New Zimbabwe site on May 16, 2015.