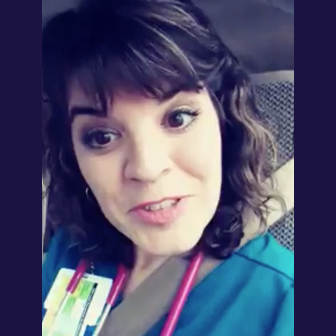 The Washington Post reports that nurse Katherine Lockler posted an amusing video to Facebook explaining key ways people can avoid the flu. The video shows strong public health advocacy—it went “viral,” haha. But some took issue with Lockler’s exasperated tone, and she was evidently “reported” to her hospital and the board of nursing. February 20, 2018 – On February 2, The Washington Post reported that Florida emergency department (ED) nurse Katherine Lockler had posted a video on Facebook in which she explained basic facts about the serious flu outbreak in the United States, especially tips on how to avoid getting and spreading the infection. As the Post’s Lindsey Bever reported, Lockler said that the nation’s ED nurses were facing “a cesspool of funky flu.” To avoid it, Lockler said, people might start by “wash[ing] your stinking hands.” Lockler then demonstrated how to sneeze into the inside of your elbow, a “magic trick” that she performed a second time “in slow motion.” Other highlights included Lockler’s critique of a “hypothetical” softball team heedlessly crowding into the ED to see an injured teammate (“You just got maybe 15 new vectors”) and her complaint that people were not listening to her warnings. Apparently she found one father letting his toddler crawl around the floor of the ED (“And instead of the dad receiving what a nurse of 10 years is sharing with him, he said, ‘Eh, it’s no big deal, it’ll build his immune system.’”). As of the time of the Post item, Lockler’s video had been viewed more than 5 million times. Of course, not everyone is receptive to a nurse going on what the Post’s headline called a “rant” about poor health habits. Who is this uppity nurse, telling me what to do? Not only do people often ignore nurses’ health advice, but some feel the need to squelch such advice. So we were not surprised to read, in what seemed to be an update to the Post story, that Lockler had been “reported” to her hospital and the state board of health. But as of today, almost 30,000 people have signed a petition endorsing Lockler’s actions. She has also started a Funky Flu Nurse Facebook page to post weekly educational videos. We thank Lockler for her strong advocacy and the Post for this fair account of it.

A little bit of sarcasm

The Post headline was: “‘Wash your stinking hands!’: ER nurse rants about ‘cesspool of funky flu’.” The piece noted that Lockler is an ED nurse in Florida who posted the video after a 12-hour shift to offer what Bever called “some expert medical advice.”

The reporter, clearly amused by what she described as “the animated – and somewhat saucy” video, related some of Lockler’s comments on how to avoid getting and spreading the flu during this critical time:

“Here are some ideas how to treat the flu at home — wash your stinking hands. … If you’re not aware of how the flu is spread, the only way you can get it is through your eyes, your nose or your mouth.” [Lockler] then demonstrated how to minimize the transmission of germs while sneezing, quipping, “Watch this — I’m going to teach you all a magic trick. It’s amazing.” She filmed herself fake sneezing into the inside of her elbow — a move that’s commonly recommended by health professionals as well as the Centers for Disease Control and Prevention. For those who missed it, Lockler did it again in “slow motion.” “It is a cesspool of flu — a cesspool of funky flu at the ER right now,” she said in the video, explaining how — hypothetically — players on a softball team should not come to the hospital to visit a sick or injured teammate. “You just got maybe 15 new vectors, or carriers of the flu, by them all walking in. … Please don’t bring your healthy children — especially your newborn babies — into the emergency room. If you don’t have what I call a true emergency, this would not be the time to come to the emergency room.” … Lockler explained that during this year’s flu season, many ER nurses are working 12-hour shifts with about “five seconds to eat. … Please thank an ER nurse — and every nurse and doctor [who] is taking care of sick people right now,” Lockler added. “We’re putting ourselves into the thick of some nasty germs to help.”

The Post also reported that Lockler had given an interview to the Pensacola News Journal in which she again emphasized the importance of taking precautions to avoid “this awful flu virus.”

I saw a dad with a toddler crawling on the floor in the emergency room, and I approached him, and I said, ‘Hey, dad, I do not feel that that’s a wise decision; your child is being exposed to some really nasty germs on this emergency room floor,’ ” she told the newspaper. “And instead of the dad receiving what a nurse of 10 years is sharing with him, he said, ‘Eh, it’s no big deal, it’ll build his immune system.’ So there’s a lack of understanding and a lack of interest in knowing what to do to protect themselves sometimes.”

It seems that Lockler also felt compelled to assure the News Journal that “her intentions were to educate — not to insult anyone.”

“I think there’s a little bit of sarcasm in my voice because the instructions were given so many times, and they were not received well,” she told the News Journal. “I tend to be sarcastic in all my speaking, but if it’s taken wrong, I would definitely apologize to that group that misheard my message because of my tone. The message is still right on the money, but if the tone was offensive, that was not the intention.”

Perhaps that last message was related the fact that, as the Post item stated, some kind soul had “reported” Lockler to the state nursing board and her hospital. The Post explained that an online petition had appeared urging support for ED nurses and staff generally, and in particular for Lockler for her “amazing video”: “For her time and effort, she is being reported to the board of registered nursing and her hospital.” As of today that petition has almost 30,000 signers. The Post article also included background, noting that “the worst flu season in years is spreading across the United States, with a sharp increase in the number of older people and children being hospitalized, according to the CDC.” The piece offered some CDC statistics – as of late January, more than 50 U.S. children had died from the flu during the current season — as well as some CDC-approved ways to avoid it, including getting the vaccine, avoiding contact with the sick, covering your nose and mouth when sneezing (with a tissue if possible, but if not then with “your upper sleeve”), and washing your hands. Those strategies are basically what Lockler advocated.

The CDC information in the Post report helpfully underlined Lockler’s achievement: she created compelling video that conveyed vital public health measures to millions of people, people who might not necessarily be aware of the latest CDC guidance. And she managed that advocacy even though, as she specifically noted in one interview, her direct efforts in the clinical setting had been met with disrespect—a reaction that seems very likely to have been related to her status as a nurse, someone much of the public, sadly, does not regard as a source of real health expertise. We can’t guarantee that people are taking the flu information in her video seriously either – they might just be laughing about what a character she is. But at least they are being exposed to good information, and the Post’s effort to back it up with actual CDC guidance making the same points is laudable. Of course, it wouldn’t be nursing advocacy if there weren’t someone trying to get the nurse to shut up and remember her place. And it does sound like that happened when Lockler was “reported” for her advocacy efforts, even though it does not sound like they caused the disclosure of confidential information about, or real embarrassment to, any identifiable individual. We imagine that her tone and style could be construed to conflict with some vague standard in an ethical code or in a guide for employee conduct. But it’s hard to imagine anyone making such a claim about a physician. It seems to us that, with lives at stake, this kind of health education should be encouraged, not suppressed.

We salute Katherine Lockler for her strong public health advocacy, and we thank Lindsey Bever and the Washington Post for a substantial article highlighting it.

If you would like to thank Lindsey Bever at the Washington Post for the article, her email is lindsey.bever@washpost.com. Thank you.