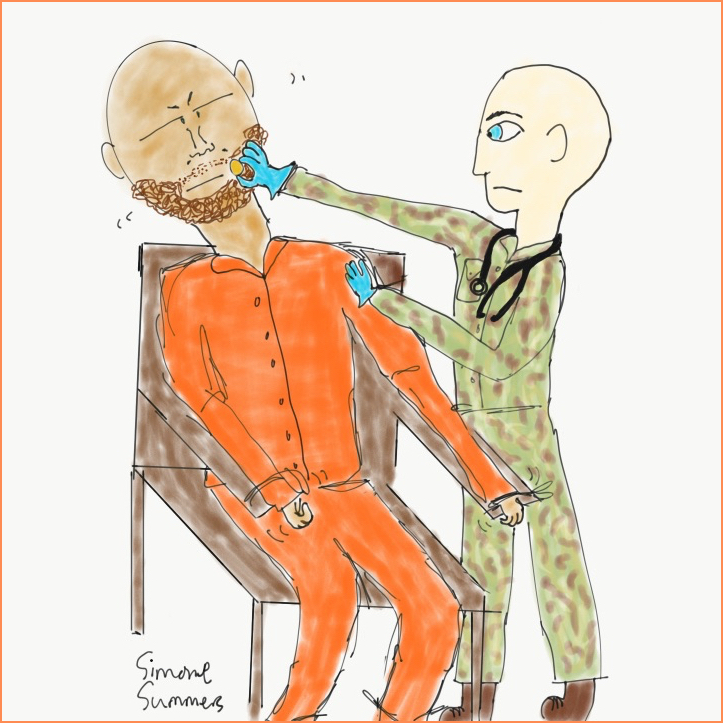 A late 2014 Miami Herald piece described advocacy, including by the American Nurses Association, for a Navy nurse at Guantánamo who refused to force-feed prisoners. The ANA president’s May 2015 op-ed in the Washington Post addressed the ethical issues.

The Miami Herald piece is “Top nursing group backs Navy nurse who wouldn’t force-feed at Guantánamo.” Rosenberg first explains that the group Physicians for Human Rights set up a conference call with ANA president Pam Cipriano and the Navy nurse’s attorney, Ronald Meister, “to disclose the letter” from the ANA to Secretary of Defense Chuck Hagel. The October 17, 2014 letter urged the Pentagon not to punish the nurse, a lieutenant, for declining to force-feed detainees at the Base. The letter reportedly said “that, based on [the] Code of Ethics, the nurse was within his rights to refuse to force-feed and should not face retaliation.” (The piece also includes a short “About” paragraph noting that the ANA “claims nearly 174,000 dues-paying members and calls itself ‘the only full-service professional organization representing the interests of the nation’s 3.1 million registered nurses…’”) The report says that the conflict came to light after a hunger striker heard the nurse state his objection and then told his lawyer, who evidently disclosed it. The article reports that a Board of Inquiry was to be convened to decide whether to discharge “the male nurse.” Meister notes that the nurse has 18 years of Navy service, but discharge before 20 years would mean losing his pension, and reportedly his veterans’ benefits if the discharge was other then honorable. Meister cites the nurse’s professional ethics: “How can you condemn a nurse who takes into consideration everything he’s been taught about patient welfare and obtaining consent and making individualized decisions and acting on everything he’s been taught?” Meister also suggests that if the military doesn’t want nurses—who have “training and obligations more than the mechanical aspects of their jobs”—to make individual decisions about these matters, they might ask staff from the “motor pool” to do the feedings. The piece includes background on the hunger strike, noting that some detainees have described the force-feeding as torture. The article says that “civilian medical groups” have also criticized the feedings; Physicians for Human Rights senior medical advisor Vincent Iacopino reportedly said they had “no clinical justification.” After senior officers identify candidates to be force-fed, the piece says, “Army guards shackle each hunger striker into a five-point restraint chair for a nurse to insert the tube and a corpsman to control the flow” of liquid food. This piece makes some valuable points about nursing ethics and nursing advocacy. The whole premise of the arguments by the Navy nurse’s lawyer and the ANA president is that nurses have a code of ethics, which hopefully will convey to readers that nursing is a real profession. It might even suggest that it’s an autonomous profession, represented by groups like ANA; the contextual note explaining what the ANA is will be especially helpful for readers who get that far, although for those who don’t, the role of Physicians for Human Rights in the matter may leave things a little unclear. The report also shows strong nursing advocacy, both in Cipriano’s example of a nursing leader advocating for the profession and in the actions of the Navy nurse, who is in sense advocating for patients who do not wish to be force fed. Of course the passing reference to the nurse as “male” was unfortunate and suggests there is something odd about being a man in nursing. But on the whole, the Miami Herald piece provides helpful information.

Six months later, Cipriano published a strong op-ed in the Washington Post, “Let nurses do the ethical thing:  Patients’ interests should trump all other obligations.” The piece celebrates the Navy’s decision not to pursue further action against the Navy nurse who declined to force-feed, but it also recommends broader policy changes to accommodate ethical conflicts health workers may face in the military. The piece first identifies Cipriano as “the president of the American Nurses Association, which represents the interests of the nation’s 3.1 million registered nurses.” She begins by stressing that nurses “protect and promote health, prevent illness and injury and alleviate suffering[,] apply critical thinking and the latest evidence,” and follow various rules. But Cipriano argues that ethics are central to nursing practice; the Navy’s decision, she says, shows that nurses have the right to make independent professional judgments and that a nurse’s first duty is to patient well-being, regardless of who employs the nurse. Thus, the decision “has far-reaching implications for all health-care professionals.” She gives examples:

What should a nurse do who witnesses a member of the medical team pressuring a patient to consent to the use of an experimental drug, or when dealing with conflicting wishes between a patient and family member about end-of-life care? In the military, a nurse may be asked to clear soldiers for deployment or redeployment when they may not be physically or mentally ready. Or a nurse could be urged to give different treatment to an enemy combatant based on the availability of resources, such as medication.

Cipriano argues that military health providers may face the hardest challenges because of their loyalties to the military and health codes of conduct, which may lead to conflicts. She notes that in March 2015, the Defense Health Board’s Medical Ethics Subcommittee recommended that the Pentagon allow “medical personnel” to decline to perform “any procedures they find ethically or morally questionable.” She says that many of the board’s recommendations are the same as the ANA’s, citing the creation of an ethics office, ethics training programs, policies reflecting that “the military health professional’s first ethical obligation is to the patient,” and providing procedures for such persons to opt out on that basis. Cipriano closes by urging the Department of Defense to adopt the recommendations “on behalf of patients, who have consistently ranked nursing as the most honest and ethical profession for 13 consecutive years, and the nation’s military health-care professionals.” (That is a rare accurate description of the Gallup polling on professions, which does not, as is commonly stated, measure “respect” for nurses.)

This op-ed has more powerful advocacy for nursing. Cipriano explains nursing as a health profession that involves thinking and ethics, not mindless hand-holding. She shows that nurses advocate for their patients, both in the clinical setting, as the Navy nurse did, and in the public sphere, through her own example in writing the op-ed on behalf of nurses and their patients. By offering specific examples of situations nurses face—including the experimental drug scenario, which involves an ethical issue created by another health team member—Cipriano also suggests that nurses have an ethical obligation to protect patients from any threat, even from physicians and other health workers, although that could have been stated more directly. And the op-ed shows that nurses can and do weigh in on important health policy debates.

These two pieces contribute to public understanding of nursing as a serious health profession.

You can write to author Carol Rosenberg at crosenberg@MiamiHerald.com or @CarolRosenberg on Twitter.

You can write to Pam Cipriano at pam.cipriano@ana.org or @ANAPresident. Please copy us at letters@truthaboutnursing.org so that we can follow your comments. Thank you!