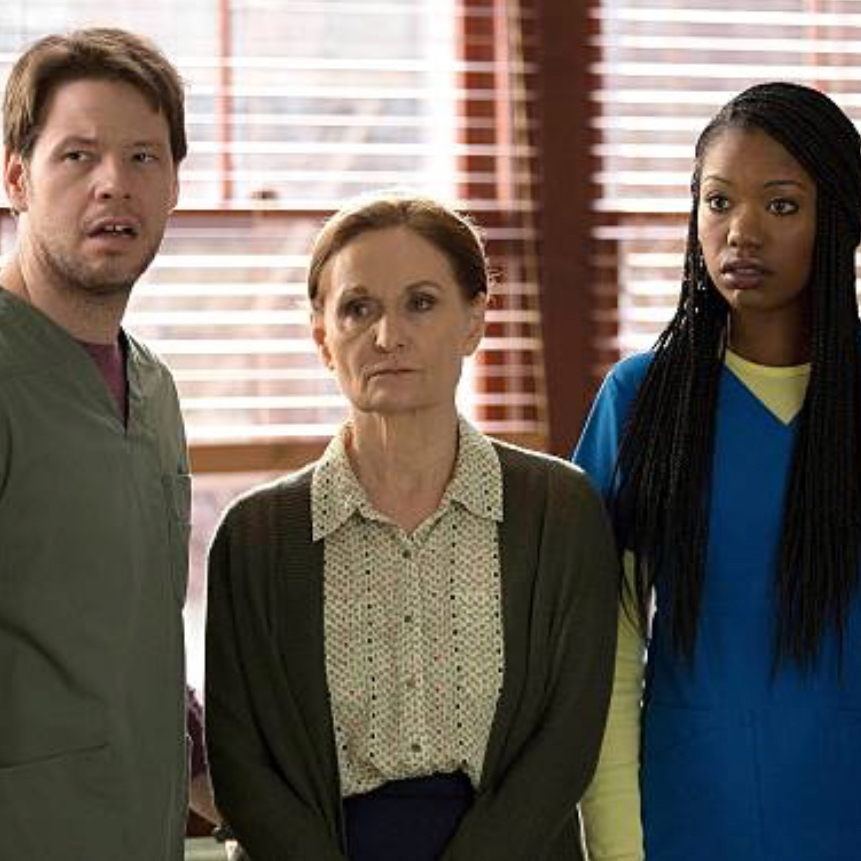 The sitcom’s third season does offer a few fleeting images of its nurses as actual health professionals. But mostly, they are physician flunkies. Morgan is clueless and pathetic, Tamra selfish and silly, and Beverly just unhinged. March 2015 – The third season of The Mindy Project features more awful portrayals of nurses and nursing, with a few twists. For the most part, the Fox sitcom’s three nurse characters remain bizarrely dysfunctional stooges at the OB/GYN practice that is the main setting for the show, performing scut work to the extent they do anything useful at all. Nurse Morgan does have a few moments suggesting that he is not just clueless and pathetic. At one point he appears to actually save nurse Tamra, his sometime-girlfriend, with an epi pen when she has an allergic reaction. In another episode, he has graduated from “nurse practitioner school,” although that is played for laughs. Morgan confirms that he can now prescribe drugs, so he is “just another drug dealer for Uncle Sam.” He also makes a wistful passing remark about preventative medicine. But the show ignores his supposed NP status after the episode. He remains a lackey. In general, Morgan’s dialogue shows him to be a loser with a comical misunderstanding of the world. In the NP episode, we learn that he thinks “etc.” is pronounced “et-ca.” The show also continues to suggest that he is desperately poor, a running gag that defies easy explanation. The attractive, assertive Tamra is not a loser, but she is frivolous and monumentally selfish, with few if any discernible nursing skills. At least Morgan and Tamra do at times play standard sitcom roles, advancing plots while receiving no particular mockery. The third nurse, Beverly, is so racist, unnerving, and wacky that she is no longer permitted to practice nursing, even in the sitcom world. Yes, the show makes fun of all its characters. The physicians have quirks and flaws; lead character Mindy Lahiri has food issues. But the show rarely mocks them as physicians. Whatever their personal issues, there is no question that as physicians they are skilled life-savers, worthy of the esteem in which society holds them. In contrast, the show’s portrayal of nurses as low-skilled servants is impossible to reconcile with the fact that real nurses are autonomous, college-educated health professionals. Mindy Kaling is responsible for The Mindy Project.

Examples of the show’s light-hearted but usually contemptuous portrayals of the nurses appear throughout the third season, which was the last to air on Fox before the show moved to Hulu. Consider the September 2014 episodes. In the second episode, a minor plotline is about Morgan and Tamra’s relationship, and in particular what physician Peter describes as Morgan’s “whipped” status within that relationship. Apparently, Tamra has allergies, so she tells Morgan he has to get rid of all 40 of his dogs. Also, Morgan notes, Tamra is allergic to all metal that’s not gold and all seafood that is not “very expensive lobster.” At the event Morgan hosts to give away the dogs, Beverly remarks that the cake she’s eating is terrible. The physician Peter notes that it’s actually a dog treat. Beverly says she knows. Peter can’t bear to watch Morgan give up his precious dogs, so he throws one of them at Tamra, to prove she’s faking her allergy just in order to control Morgan. But Tamra has a severe allergic reaction. Morgan quickly stabs her with an epi pen. Tamra says he has saved her life. In the third episode, Mindy is discussing her tax problems with her colleagues. Morgan says: “I actually don’t have to pay income taxes because my salary puts me under the poverty level.” The one good thing in all this is Morgan’s epi pen use, although that is something lay people can do too. Everything else, from Morgan’s gullibility to Tamra’s selfishness to Beverly’s daffiness, presents nurses as a series of punchlines.

Or consider the February 2015 episodes. In episode 14, Mindy gets back to the office after an extended absence. Tamra, who has not noticed Mindy was gone, chastises her for not talking to her for two months. Beverly says of course Mindy was gone, because she was getting her Nobel Peace Prize, but her head healed well. As physician Danny notes, Beverly thinks the Indian-American Mindy is Malala Yousafzai. Peter gives Mindy a health exam in which Morgan actually plays a role, taking her blood pressure, which he says is “one billion over one million,” so she should eat better. Morgan offers to get her “the breakfast sandwich with the bacon, egg, cheese, ham.” But Mindy wants “double bacon, double egg, double cheese,” plus hash browns. In a later episode that month, Tamra complains about a homeless guy hanging around, and she asks for a BB gun. Beverly offers Tamra her gun, which she keeps in the office refrigerator! Here again, there is a tiny bright spot, Morgan taking the blood pressure, but otherwise it’s fairly constant idiocy.

Episode 4 has the NP plotline. In that one, Morgan voices his displeasure to colleagues.

Morgan:  I am furious. Last night I graduated from nurse practitioner school. None of you came.

Tamra:  It was sad as hell. Morgan bought an extra wheel of Brie just for you Dr. L.

This means Mindy Lahiri. Morgan notes that the Brie wheel “really set me back.” Other colleagues offer lame excuses for not being there. Later, Mindy stops by to give Morgan a graduation gift, admiring his glasses; he notes that he got them at the Salvation Army.

Morgan:  Oh yeah. Now I’m just another drug dealer for Uncle Sam. Whatever happened to preventative medicine, am I right?
–

Morgan:  I’ll write you a prescription for a very strong sedative, I take it whenever I have to do something scary like watch a scary movie, or hear a scary story, or et-ca, et-ca, et-ca.
–

Later, Morgan invites the lonely physician Jeremy to dinner, and now that he’s an NP, he will make it his treat! He’ll “just have to stop at the pawn shop on the way.”

At the end of the episode, physicians Jeremy and Peter present Morgan with new scrubs, with Jeremy admitting that an ongoing feud between the two physicians did cause them to “neglect to give you proper due for your new degree.” The scrubs actually say “NP.” Morgan says it’s the most beautiful thing he’s ever seen. But he also asks if they have a gift receipt and notes that they misspelled his surname on the scrubs. He says he will wear them with pride…at home.

We suppose it’s good that the show recognizes NPs exist, that they have prescribing authority, and that they get a “degree.” But those elements are insignificant in view of the overall disrespect for Morgan’s supposed NP status and what actually happens on the show generally, where he does no NP work, continues to act as a low-skilled flunkey for the physicians, and frequently shows that he is unqualified to be anything more.

Another revealing plotline plays out in episode 18, aired in March 2015, in which Tamra proposes a new idea to her physician colleagues.

Tamra:  Excuse me, everyone, I have an interruption. Morgan, Beverly, and I are doing a walkathon for a problem that affects us all. [She points at a white poster that says “NURSE OBESITY FUNDRAISER”.] Nurse obesity.
–

There is little interest. But the physician Adrian is especially mean. The nurses protest to the supervising physician Jeremy and threaten to quit. Jeremy notes what a good worker Adrian is, but Mindy privately tells the other physicians that the nurses are not totally wrong “and we cannot have our entire support staff up and quit.” Later, Adrian orders the nurses to make him a sandwich. Jeremy agrees to talk to Adrian, and he does. Adrian agrees to take care of it.

Adrian (to nurses): Hey, you got a problem with me, you bring it to me. I did not become an OB/GYN just to deal with a bunch of whiney babies!
–

Beverly: Do you even know what my job is? I definitely know it. I just want to hear someone else say it.

After Adrian rips up the fundraising poster, Tamra tells Jeremy that “either he goes or we go.” Jeremy fires Adrian, but the nurses later discover he is actually in desperate straits in his personal life. They reconsider, Adrian is re-hired, and the nurses give him all their obesity fundraiser money, which is $187.

The autonomy messaging here is not helpful, even in the context of a physician practice, because it reinforces the sense that nurses are not professionals, but just, well, “support staff.” And getting Adrian fired is not linked to any real appreciation for what the nurses do for the practice; it’s just a plot device. The obesity theme is an odd one. We are not sure if the show actually thought about whether nurses as a class have an obesity problem, but of course it doesn’t really matter—this is just a vehicle to make them look ridiculous and, presumably, willing to steal money given for charitable purposes. The one small bright spot we see? The show seems to understand that it would be out of bounds for a physician to ask nurses to make him a sandwich.

See all our analyses on The Mindy Project.