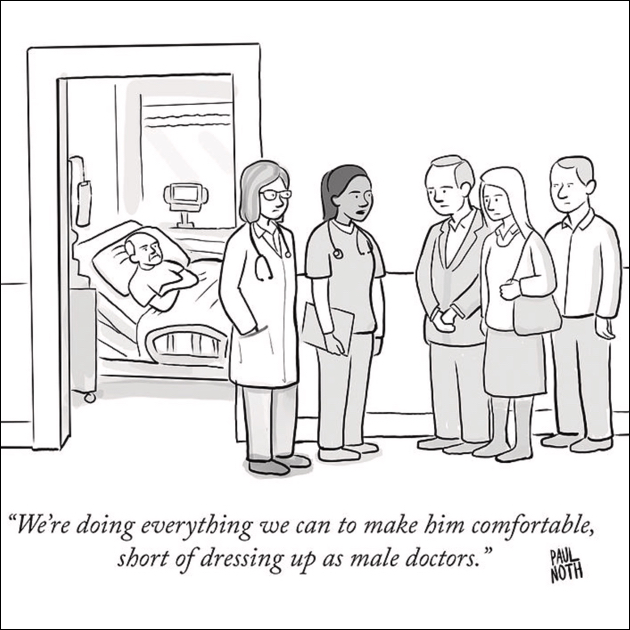 Paul Noth draws a female in scrubs, standing beside a female in a white coat, telling a grumpy patient’s family: “We’re doing everything we can to make him comfortable, short of dressing up as male doctors.” April 9, 2018 – In what may be a cartooning singularity, a drawing by Paul Noth in this week’s New Yorker can be seen as depicting a nurse and a physician without insulting nurses. The cartoon focuses on two female health workers: an apparent physician in a white coat and a colleague who wears scrubs over a long-sleeved undershirt and holds a clipboard–she could be a nurse. They stand outside the hospital room of a grumpy-looking older male patient, facing three people who are presumably the patient’s grown children. The apparent nurse tells the patient’s family: “We’re doing everything we can to make him comfortable, short of dressing up as male doctors.” The apparent physician looks on in evident agreement. Noth has managed to find a point on which female nurses and physicians can presumably agree – some patients retain sexist attitudes about health care expertise. Given the visual elements described above, identifying the “doctor” status as part of the patient’s discriminatory attitude seems to indicate that respecting only physicians is also a problem. And having the apparent nurse be the one to speak to the family suggests that nurses are team members who actually talk to patients, even when physicians are around. The apparent physician does nothing to suggest that she thinks she is better than the nurse; they seem to be in it together. Noth gets some additional points for putting the apparent nurse in solid scrubs, not patterned ones, and for making her a woman of color, promoting diversity. But wait—what if readers see the apparent nurse as a physician, simply one who dresses in scrubs and carries a clipboard? Since the fantasy of all-physician hospital care still prevails in many quarters (consider Grey’s Anatomy and The Good Doctor), that is possible. Some physicians do wear scrubs, and the scrubs-clad woman’s reference to “doctors” may simply define the class of professionals at issue, i.e., physicians. As in, the patient wants “male doctors,” not female doctors like us. However, Noth does not give the word “male” any more emphasis than “doctor.” Of course, the apparent physician could herself be a nurse practitioner—they wear white coats—but we doubt many readers would see it that way. Noth himself indicated to us that he believes he was envisioning two physicians when he drew this, the one in scrubs being a surgeon, but he also said viewers have the right to interpret cartoons as they wish and he would have no objection to an interpretation that she was a nurse. And for our purposes, what matters is how most viewers see it. In any case, going with our first, nurse-and-physician interpretation, we thank Paul Noth and The New Yorker.