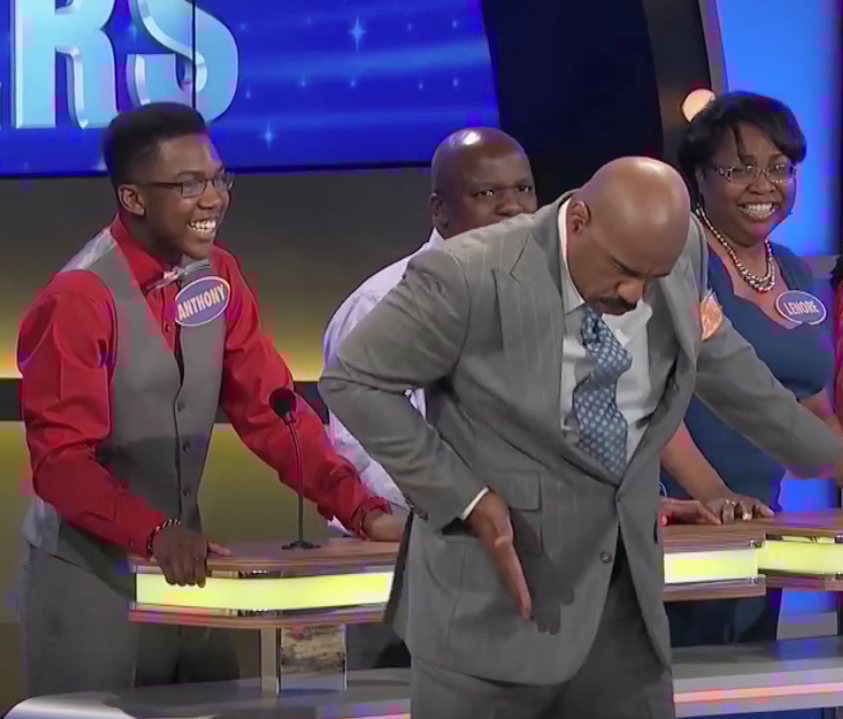 In survey questions, the highly-rated syndicated show Family Feud has urged the public to think of nurses as females who are mainly focused on the sexuality of male patients and physicians. The effect is to trivialize, if not encourage, the real sexual harassment of nurses. Please sign our petition to ask Family Feud to stop.

May 21, 2018 – The popular syndicated TV game show Family Feud has offered a long series of survey questions that sexualize nurses. The questions express a mix of desire and fear about nurses’ relations with physicians and male patients, reinforcing both the naughty nurse and battle-axe stereotypes. The show asks contestants to guess the top responses to survey questions it previously posed to 100 people. Today, the question as stated by show host Steve Harvey was: “A beautiful nurse doesn’t look very sexy when she’s holding a what?” Other recent examples include: “Name a place in the hospital a doctor takes a nurse for a romantic examination” (2017); “Name something hospital nurses might fight over doing to a hot male patient” (2016); “We talked to a hundred men, if you were a hospital patient, what would you rather have a female nurse do for you than a male nurse?” (2015); and “Name something a hospital nurse might threaten to do to a misbehaving male patient” (2014). Not surprisingly, the most popular answers often related to sponge baths! For the questions that reflected male fears, the most popular answers tended to relate to intimate body features or functions. And the way these questions played out on the actual show, as encouraged by Harvey, reinforced the sense that nursing is a job populated by females who are mainly about sexuality and private parts. Yes, most of the questions do not rule out the possibility that the “nurses” are male, but the chance they will be understood that way is low. As for what a patient would rather have a female nurse do for him than a male nurse, one young male contestant enthusiastically asserted that he would like the nurse to “check [his] groin,” using his hand to illustrate his preferred technique with an up-and-down motion that Harvey was happy to laugh about and even imitate. Ah, family fun! But “jokes” are often the way negative stereotypes about disempowered groups are expressed, including through harassment directed at group members. The naughty nurse and battle-axe stereotypes reflect nursing’s gendered history. And they contribute to the social disrespect that continues to harm the profession. In particular, research shows they legitimize sexual abuse by males who might find such “jokes” amusing and they undermine nurses’ claims to the resources needed to save lives. Harvey’s Family Feud can attract in the range of 10 million viewers. Scenarios like these imprint on those viewers the idea that nurses are a degraded sex joke, not college-educated health professionals. We urge the producers to stop, apologize to nurses and make amends to the profession by using questions that highlight the true value of nursing.

Send our letter or one of your own

Family Feud seems to have a problem with nursing. Consider the examples we know of (we assume there are more).

May 2018: Online data indicates that in an episode broadcast today, host Steve Harvey asked contestants to guess the most commonly given answers to this question.

“Name something a nurse might do to make a patient feel good.”

The most common answers from the 100 survey respondents?

The question may not seem to have invited sexual responses, and indeed half the responses (including the top two) do not go in that direction. However, for casual viewers, those also don’t present nurses as necessarily have any more skill than lay people, who can have a conversation, tuck people in, and hand over pills. And note the question’s phrasing: “make you feel good.” That sounds less like skilled health care or easing pain, and more like sex or at least recreational activity. And the remaining answers are overtly sexual or at least suggestive: making out, a sponge bath, a massage, and even smiling (as in the familiar misogynist street hassle, “smile, baby!”). Nurses seem to be mostly good for unskilled comfort and sexual attention.

November 2017: In the episode broadcast on November 9, Harvey asked one contestant to guess the most popular survey answers to this question:

“A beautiful nurse doesn’t look very sexy when she’s holding a what?”

The most common answers from the 100 survey respondents?

Of course, beyond the “sexy” element, the question invites viewers to equate the actual work of nurses with custodial tasks that most will find disgusting or unpleasant, rather than with critical judgments and interventions that save lives.

October 2017: In an episode apparently broadcast on October 18, 2017 (we are basing our dates on when the show posted clips on YouTube and other online information), one question was:

“Name a place in the hospital a doctor takes a nurse for a romantic examination.”

The most common answers:

Of course, this is the classic naughty nurse scenario, physician variety—although it’s not stated specifically, it’s obvious the idea is that a male physician “takes” a female nurse for this “examination.” That verb almost makes it sound like it might not be consensual, and the “stirrups” response is unsettling, but then again, what “sexy” nurse wouldn’t want to hook up with a physician while supposedly working in the hospital? It’s not like nurses have anything else to do, right?

“Name something hospital nurses might volunteer to do if Steve Harvey was a patient.”

The most common answers:

May 2016: In an apparently related question in a May 2016 episode, Harvey asked contestants:

“Name something hospital nurses might fight over doing to a hot male patient.”

One contestant guessed giving him a catheter, ha ha, but that was not actually among the top responses. However, these were:

“Name something you hope the nurses aren’t saying about you when you’re out during surgery.”

One contestant correctly guessed that the most common answer was “how little you are,” which the show’s answer board expressed this way.

March 2015: In a March 2015 episode, Harvey posed this question to a 16-year-old male contestant who was, like all contestants, there with several family members:

“All right Anthony, listen to me, we talked to a hundred men, if you were a hospital patient, what would you rather have a female nurse do for you than a male nurse?”

So almost two thirds of the men in the survey were happy to oblige the show with the most obvious stereotypical naughty nurse activity, which is presumably what it wanted.

And consider how the question played out when posed to contestant Anthony, who ran with the question’s sexual implications at least as far as the show could reasonably have expected, especially given that he was standing beside older family members (including one older female).

Anthony: “Well, see, I got a groin problem, so, I probably…check my groin.”

To illustrate, Anthony did an exaggerated up and down motion with his hand in front of his groin. Steve Harvey pretended to be surprised by this and implied that Anthony had been inappropriate, saying, “But on TV, though, just ‘check my groin!’” However, Harvey was clearly playing it for laughs, and he even proceeded to mimic the hand motion. That performance made clear to the audience that Harvey didn’t really have any issue even with the overtly sexual nature of Anthony’s conduct on a “family” TV show, much less the sexual-harassment fantasy that the conduct represented. For some reason, “check my groin” was not in the top 8. Maybe it will be next time, given how many people have watched episodes of Family Feud since this one.

“Name something a hospital nurse might threaten to do to a misbehaving male patient.”

One male contestant, perhaps trying to find some way to talk about the nurse sponge bath that is evidently the straight man’s most cherished fantasy, said “Take away his bath.” But that was not there. Nor was a female contestant’s guess “not tie the back of his gown,” although Harvey did endorse that as his own preferred way to get provider attention in the outpatient setting. The actual top responses:

“If a doctor’s fooling around with his nurse, name something in the office they might use:”

As in politics, of course, we can’t blame the media alone for harmful messaging that is endorsed by large parts of the population. It’s true that the show is encouraging the persons surveyed to respond with anti-nurse stereotypes (and, incidentally, to embrace the assumption that all physicians are male). And the question about physicians “taking” nurses somewhere for a “romantic examination” suggests that the show sees nurses as little more than physician sex toys.

But none of these questions actually included the terms “sponge bath” or “catheter.” No question forced a male contestant to smirk about his “groin” and mime a sex act. Society as a whole teaches a person to display that kind of misogyny and contempt for a particular profession composed mainly of females.

But the media is a critical part of that socialization. And this popular show is working hard to perpetuate the naughty nurse and battle-axe stereotypes for cheap laughs. Such categorizing “humor” is a common way to degrade oppressed groups, like women. The show creators know that with a little hinting and winking they can elicit those stereotypes from respondents, who generally understand that is what they are supposed to provide. There is no other way to explain the overwhelming majority responses for “sponge bath” whenever the question introduced the idea of a male patient, with the response rate even higher when “hotness” was specified. And why would only nurses be the ones to titter about unconscious patients during surgery? Isn’t anyone else there? The swaggering Harvey is an effective point person for this kind of messaging, as his eager adoption of the “check my groin” sexual-harassment fantasy showed.

On the other hand, survey questions that focus on fears and threats seem to reflect male concerns about females having power over them, especially in intimate areas. Thus the responses about penis size, catheters, and enemas. These questions sought and got responses that evoked the battle-axe, the nurse abusing authority over men that she should never have in the first place.

These stereotypes do not directly address nurses’ skills or autonomy, but nurses who are all about sex and basic body functions are clearly not serious health professionals. They are low-skilled helpers who perform custodial tasks and giggle about dinky winkies. It’s today’s question that really brings it all together—nurses are defined mainly by “sexy” and “bedpans.”

Please click here to send a letter to Family Feud! We have written one you can send, but please feel welcome to write one of your own above our letter or replace ours. Thank you!