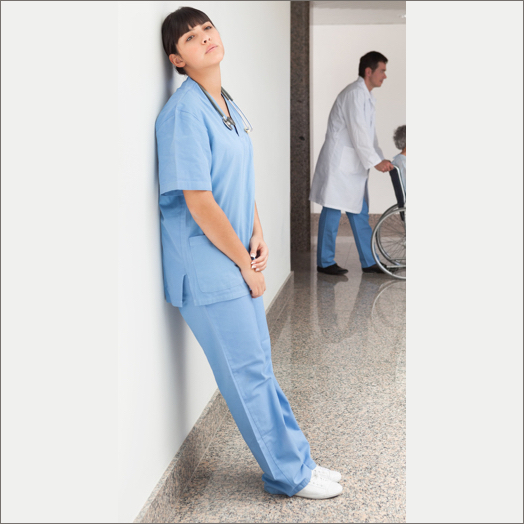 A good February 2019 article paints a distressing picture of the state of U.S. nurse staffing, emphasizing the dangerous effects on patients and nurses themselves. The piece relies on nurses and a union representative who calls for minimum nurse staffing ratios for all units, which California is still the only U.S. state to require.

February 12, 2019 — Today The Guardian had an article by Michael Sainato reporting that many U.S. nurses are so overwhelmed that they suffer “hangovers” from their work—and patient safety is at risk. The article relies mainly on nurses at hospitals in West Virginia and Minnesota. They do a good job of explaining some of the harmful effects of short-staffing, including nursing burnout. The piece also cites research providing evidence of those effects on patients, which include missed care, higher rates of errors, and an increased risk of death. And the report quotes a representative of the union National Nurses United (NNU). She touts the California mandatory minimum staffing law and argues that the real “nursing shortage” is simply a refusal of hospitals to hire enough nurses. The piece notes that media reports have long talked about a “nursing shortage,” and it at least implies that this has always been a sham perpetrated by hospitals to cover up their refusal to spend the money to hire enough staff. In fact, there really have been shortages of available nurses to fill open positions in the years after 1998. But it is also true that health care providers have rarely been willing to hire enough nurses to give the care patients need, at least in part because of a chronic failure to understand what nurses really do for patients. And this second type of nursing shortage has been evident in the last decade, as interest in the profession has increased and many nurses who had fled the bedside because of poor conditions returned in the wake of the Great Recession. In any case, the Guardian article rightly seeks comment not only from the nurses but also the hospitals where they work. The hospitals’ responses range from bland denials to silence. Overall, the piece effectively highlights the dangers this type of nursing shortage poses to patients and nurses. We thank those responsible.

Unsafe staffing is the standard of care

The report’s subhead is a good summary: “Nurses face burnout, a high turnover and patient safety errors as ‘unsafe staffing’ has become the standard, advocates say.” The piece first quotes Brenda Meadwell, a labor and delivery nurse at a Bluefield, West Virginia hospital that is one of 111 owned by Community Health Systems. Meadwell says frequent understaffing means she can’t give her patients adequate care, “which could lead to missing something that could be serious,” a situation that also puts her license “on the line every day.” She gives specifics, noting that her department needs a nurse’s aide, a technician, and a secretary to handle tasks nurses are now expected to do in addition to patient care. And the hospital’s response? It concludes the piece: “Community Health Services did not respond to multiple requests for comment.”

The article also consults two nurses at United Hospital in St. Paul, Minnesota. Emily Sippola points to constant staffing problems, focusing on the ability of nurses to get breaks. She explains that this understaffing leads to “the nurse hangover,” meaning “fatigue and malaise comparable to a hangover from alcohol,” as well as long-term effects including burnout, high turnover, and patient safety errors. Emergency department (ED) nurse Brittany Livacarri echoes the concern about breaks and gives details about nursing in the ED. She reveals that “there can be 20 to 30 patients waiting in the triage area to be seen with just two nurses to look after them,” even though the ED tries to keep the ratio at no more than three patients per nurse. In response, hospital owner Allina Health sent an email stating that it appeared that “what you are being told by the two nurses is inaccurate. We work hard to ensure a safe and supportive work environment for all our caregivers. Our staffing ratios are consistent with the level of care required in each unit.”

The report also provides relevant data and advocacy, including commentary from NNU’s Michelle Mahon. The piece says that the health care industry “has for decades attributed widespread understaffing issues to a nursing shortage,” citing a 2001 CNN article and other reports. However, the piece says, recent research and projections actually point to RN surpluses in most U.S. states over the next decade, and advocates argue that “the shortage is simply a reluctance by companies to cut profit margins by hiring enough staff.” Mahon calls it “a convenient argument for the industry to validate their underresourcing of registered nurses on the floor, simply saying there’s a nursing shortage, but there isn’t.” The piece notes that unions like NNU have pushed for minimum nurse staffing ratio laws like the one passed in 2004 in California, “the only state currently with a minimum patient-to-nurse ratio law in the US.” (Actually, Massachusetts has a minimum staffing law applicable only to intensive care units; in November 2018 the state’s voters rejected a ballot measure that would have applied minimum ratios to other units.) The piece cites research showing that the California law increased nurse employment and decreased nurse injuries, as well as more general studies showing that increases in nurse workloads harm patients, significantly raising the risks for infections and death. NNU’s Michelle Mahon said:

Outside of California, unsafe staffing is the standard of care. The California ratio law, if implemented nationally, could save tens of thousands of lives. Preventable medical error, which nurses are the safe guardians of preventing, is the third leading cause of death in this country.

This is a good summary of the issues in a limited space. The piece explains what happens when nurses are understaffed, including the effects on patients and nurses themselves—the “hangover” image is a powerful one. And for expert comment it relies on nurses, who are the experts. The direct care nurses have good quotes about the ground-level effects of understaffing, and Mahon offers some strong advocacy on ratios, especially her comments about saving lives and the role of nurses in preventing deadly health care errors. The report also gives hospitals a chance to respond. It might have included the arguments of management-side representatives against the kind of mandatory ratios California has, arguments that evidently succeeded in derailing the Massachusetts ballot initiative in late 2018. The piece does seem to suggest that genuine shortages of nurses to fill available positions have not existed over the last couple decades in the U.S., and that is incorrect. But it is correct to say that the most critical shortage today is an unwillingness to fund needed nursing positions and, as Meadwell notes, to provide the support staff nurses need in order to focus on nursing care. We thank Michael Sainato and The Guardian.

See the article “Why America’s nurses are getting ‘hangovers’ from their work,” by Michael Sainato, posted on February 12, 2019 on The Guardian’s website.