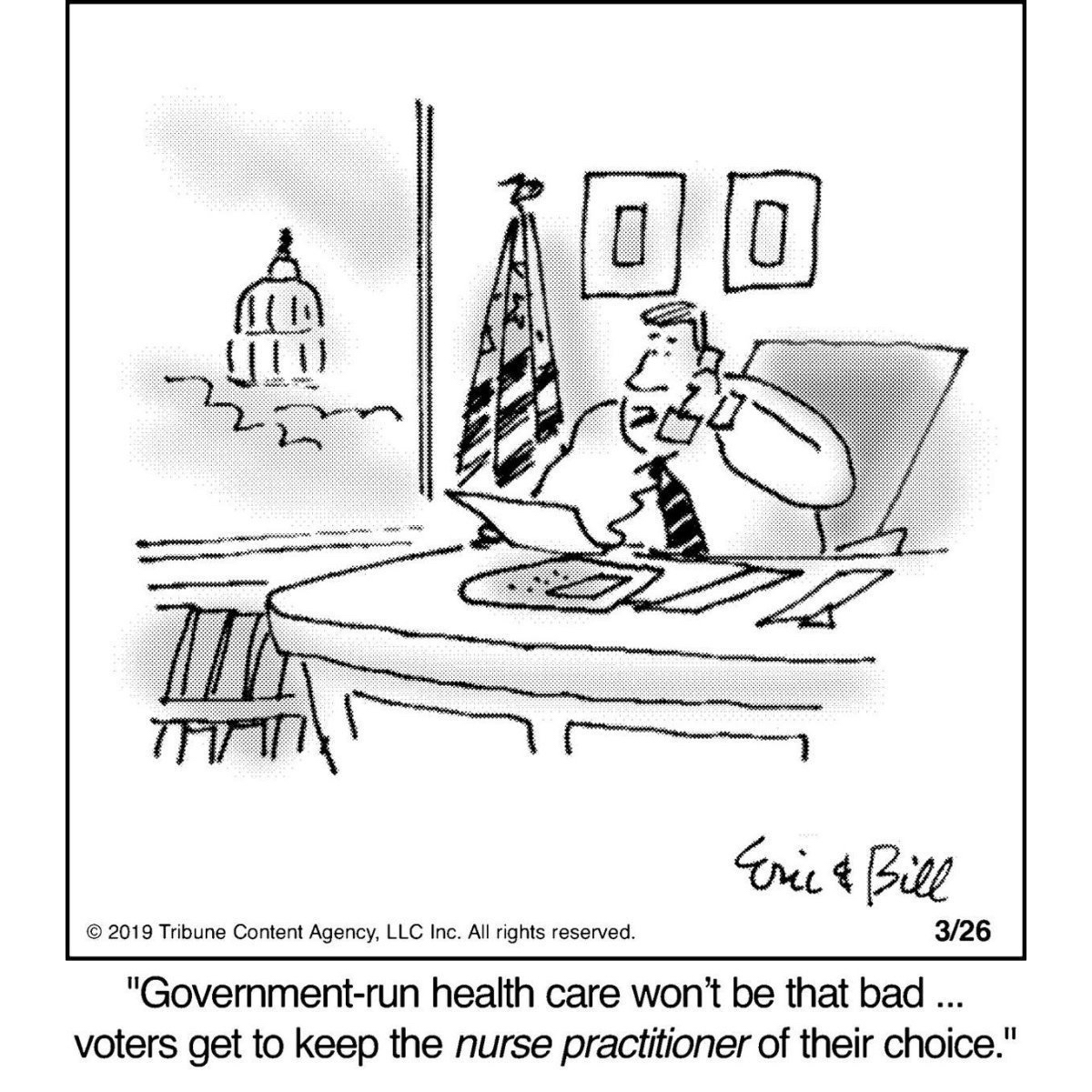 A recent Bottom Liners cartoon joked that “government-run healthcare” won’t be so bad because voters can “keep the nurse practitioner of their choice.” In fact, studies show NP care is at least as effective as physician care. But the stereotype that NPs are inferior substitutes remains common, undermining their care and threatening public health.

March 26, 2019 – Today the syndicated cartoon Bottom Liners showed a man who appeared to be a federal lawmaker on the phone assuring someone that “government-run healthcare won’t be that bad…voters get to keep the nurse practitioner of their choice.” Wait–could this be a brilliant strategy to expand U.S. health coverage, by offering consumers the choice of nurse practitioners? Maybe cartoon creators Eric & Bill Teitelbaum know that extensive research shows that the care of nurse practitioners (NPs) is at least as good as that of physicians. We’d like to thank them for caring so much about public health!

We’d like to, but sadly, we realize their actual message is that NPs are just cut-rate physician substitutes, which has been the stereotype of NPs since the beginning. In fact, expanding access to NP care has been critical to improving outcomes in underserved communities for decades. (Incidentally, the other idea underlying the cartoon is that a greater government role in health care will cause harm, but of course, the superior public health measures seen in developed nations with universal coverage show the reverse is true.) It does not seem like the Teitelbaums put a lot of work into these cartoons. We note that the drawing used for today’s NP cartoon was an exact reproduction of one that ran just 3 days earlier with a different caption, and that the basic outline of the lawmaker image can be found in one of their very first cartoons from 2001. But they could at least try to avoid contributing to damaging stereotypes that undermine the efforts of nurses to get the resources they need to save lives. We urge the Teitelbaums and the Tribune Content Agency, which syndicates their cartoons, to make amends by working to educate the public about the true value of NP care.

Please send our letter or one of your own about the Teitelbaum’s cartoon through our online letter-writing campaign. You can also take them on by Twitter to @TribuneAgency and @Bottomliners. Also Tribune’s general manager is Wayne Lown who is at @LetsBePals. Yes, let’s ask Mr. Lown to “let’s be pals” by printing a public apology for undermining nurses with the publication of commentary filled with baseless insults, and make amends by printing cartoons depicting nurse practitioners as qualified, life-saving professionals whose care is at least as good as that provided by physicians. Thank you!