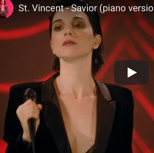 Alt-rock icon St. Vincent puts the naughty nurse first in a series of sexual role-playing images in the song “Savior” from her acclaimed recent album MASSEDUCTION. The song may not do enough to reject that specific image. But it does seem to reject women’s confinement to stereotypical roles and the related expectation that they martyr themselves for others—themes to which nurses can relate.

In “Savior,” a sort of electro-funk power ballad, St. Vincent flirts with stereotypical images of female sexuality. She starts here: “You dress me up in a nurse’s outfit / It rides and sticks to my thighs and my hips.” The song’s lyrics suggest that none of these conventional male visions of female eroticism fit, and that despite a series of urgent pleas from some unnamed “you,” the song’s speaker can be neither “savior” nor “martyr.” These stereotypes may sound “seductive,” but they seem to be untenable for a woman trying to survive in a harsh new world.

“Savior” gets into sex, love, sacrifice, spirituality, and death. Those themes are just part of the album’s lyrical menu, which also includes alienation, addiction, the fame monster, and social corruption, all served with shredding guitar, pounding electronics, and soft strings. In the first part of the song, St. Vincent (whose real name is Annie Clark) offers three verses that capture some major fetishes, which she delivers in a swaggery, quasi-ironic voice:

You dress me in a nun’s black outfit
Hail Mary pass, ’cause you know I grab it
Hand me a badge, and a little billy club
Like I’m supposed to book you on a hit-and-run  …

These verses are interspersed with the chorus, which is variations on this:

Then the song shifts into a long series of pleas, along these lines:

Clark draws out the word “please” with some genuine emotion; the parenthetical inserts are muttered into the mix.

The speaker certainly seems like a sex object, and it also seems that someone else (“you”) is directing her. On the other hand, in this case those fetish outfits generally put the speaker in a dominant role (the ruler so she can “make it hurt”; the “little billy club”). Regardless, the speaker isn’t satisfied, although the leather outfit is “better.” Is that because it’s the only one that’s not obviously related to a female work role in which sexual power dynamics should have no place?

The song alternates this imagery with the repeated insistence that, while the speaker maintains a kind of order or wellbeing (“I keep you on your best behavior”), and her love will last even beyond death, she can’t ultimately be responsible for “you”—she can’t be a “savior” or “martyr.” The second half of the song is dominated by heartfelt pleas from that “you,” presumably for the singer to relent and play the savior (or at least provide the sexual healing of the naughty nurse). This begging seems to tear at the singer but not to sway her:  in the end, she’s “not Jesus.” Still, the urgency of the pleas and the somewhat buried resisting lyrics leave things in some doubt.

The identity of “you” is also unclear. Is it society, or the patriarchy, or even some women, who confine females in sexual and work roles but also expect them to “save the world”? Or powerful representatives of Christianity, who have presented females as icons of purity and divinity but not as equals of men, even as they may call women to sacrifice themselves for others? Or model / actress Cara Delevingne, Clark’s ex-girlfriend, for whom tabloid reporting suggested Clark had served as a kind of “savior,” and who Clark also reportedly vowed to love “forever”? But Clark herself has strongly cautioned—in one of these same media reports—against reading songs by women too literally, as simple diaries of their own lives, as if they can’t write metaphorically or universally.

Since MASSEDUCTION was one of the most highly regarded pop albums of 2017, the song’s imagery presents a striking and likely influential use of the naughty nurse. But this isn’t the exploitation that you might find in some music video by male artists like Hedley, blink-182, Kavana and Keith Anderson. Like Sonic Youth on their 2004 Sonic Nurse album, Clark appears to be exploring and questioning gender stereotypes.

Nurses in particular have been diminished through sexual imagery (the naughty nurse) and saintly imagery (the angel), then expected to be uncomplaining saviors and martyrs. Curiously, Clark resists a reference to the battle-axe, the third feminine extreme that has plagued nursing. In fact, of all the work-related fetishes she plays with here, only the nursing one includes no suggestion of aggression. The obvious thing would have been to add a big syringe, the nursing equivalent of the ruler or club. That’s what shoe company Skechers did in their 2004 “naughty and nice” ad campaign, in which Christina Aguilera appeared as a sexy, mock-threatening nurse. But Clark chooses to associate the nurse outfit simply with tactile eroticism, and arguably with awkwardness or even vulnerability (it “rides and sticks”). Maybe nursing imagery is so loaded that all you have to say is “nurse’s outfit” and every listener’s mind auto-downloads the whole suite of female nurse stereotypes. No need to spell them out.

Of course, Clark means a naughty nurse outfit, not a real nurse outfit. It would be nice to think she knows the difference, but it’s not clear all her listeners will. And there is an argument that any ambiguity in the presentation of that image is problematic for nursing. In the end, though, it seems that the song is rejecting the notion that women, including women in nursing, should be confined to traditional roles and stereotypes. The outfit that “rides and sticks” doesn’t fit.