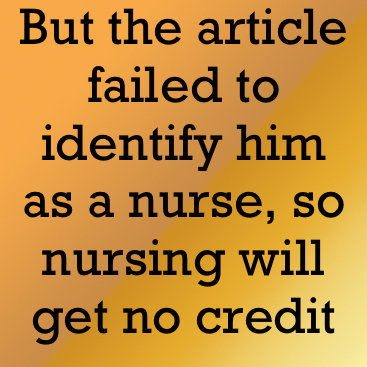 Nurses are missing from many New York Times health pieces, consistent with a recent study

Health reports published just a few days apart in the Times illustrate the findings of the new Woodhull Study Revisited: The mainstream news media still mostly ignores nursing and nurses as expert sources—even on health topics about which nurses know at least as much as the sources on whom the items do rely.

July 2018 – If anyone is looking for examples of what the Woodhull Revisited Study found—that mainstream health reporting ignores nurses and lacks nurse expert sources—consider two New York Times articles this month. Judith Matloff’s July 24 story about the brief end-of-life “rallies” sometimes seen in hospice patients did briefly quote the leader of a hospice and palliative care association who is also a nurse. But the article failed to identify him as a nurse, so nursing will get no credit. Meanwhile, the report had more extensive quotes from four identified physicians, even though nurses spend much more time with dying patients than physicians do. In the other piece, dated July 27, Kaiser Health News reporters Jordan Rau and Elizabeth Lucas felt no need to consult nurses for an article about nursing. The report described Medicare’s recent move to lower ratings for nursing homes that fail to show adequate RN staffing levels as required by the Affordable Care Act (Obamacare). In that article, we only heard from a non-nurse association director and a non-nurse health policy professor. Readers get little sense from these reports that nurses are worth consulting about the care of hospice and nursing home patients. As a corrective, the New York Times might consider Larissa MacFarquhar’s excellent 2016 New Yorker piece on the work of hospice nurse Heather Meyerend. That article clearly demonstrates the expertise and central role of nurses in the care of such patients.

The first piece is "The Mystery of End-of-Life Rallies" by Judith Matloff. The subhead suggests that the article will feature “palliative care experts” discussing how those in hospice care sometimes “perk up briefly before they die” (a state also known as terminal lucidity). But based on what readers actually see, those experts are pretty much all physicians, even though nurses spend far more time providing skilled care to terminal patients. The piece does refer in passing to information about such rallies coming from “doctors and nurses interviewed for this article.” Perhaps a nurse provided the anecdote about a dying patient with a brain tumor who had not eaten for weeks before becoming more animated and asking for specific foods. The patient nibbled at those foods and became more lucid for a while, but she died fairly soon after, as often occurs. The piece also credits “experts” and “hospice professionals,” including for the theory that the mind becomes more responsive as medications like chemotherapy are reduced in anticipation of death. The piece does briefly quote “John Mastrojohn, the executive vice president of the National Hospice and Palliative Care Organization.” He says: “There’s great mystery around this. But everyone who works in the sector has a story.” Later, he makes another brief appearance: “Mr. Mastrojohn speculates that the social support at a hospice can give the chronically ill more pep than in a sterile hospital where they’re hooked up to machines.” Mastrojohn is a nurse (an RN, MSN, MBA), but the piece never says that, so nursing will get no credit even for his limited comments. All four other named expert sources are physicians. “Dr. Craig Blinderman,” a palliative medicine specialist at Columbia, says evidence is elusive. The piece offers direct and indirect statements from him about the challenges of researching the topic, his theories about what causes the rallies, and how he tries to manage family expectations. “Dr. Janet Bull,” chief medical officer at North Carolina hospice organization Four Seasons Compassion for Life, also gets multiple direct and indirect quotes. She describes one patient who briefly regained lucidity after 10 years of dementia. “Other doctors” confirm the commonality of the request for a particular meal. “Dr. Martha Twaddle,” with the Northwestern Medical Group in Illinois, also gets multiple quotes. She describes an unreactive dying patient who suddenly asked for a certain locally famous type of hamburger. “She took two bites and then fell back asleep.” Other unreactive patients may suddenly share final instructions for family, like taking care of the car. Twaddle also shares the story of a patient who seemed to wait for her son, who was in the military, to arrive. When he finally did, after a month, she “responded, and then passed 15 minutes later.” And in an almost comical echo of the physician privilege that the piece itself reflects, “Dr. Charles Wellman,” chief medical officer at the Hospice of the Western Reserve in Cleveland, gets several quotes to explain about “patients who become alert only for the doctor.”

To be clear, the point is not that physicians have nothing relevant to say on the subject of end-of-life rallies, but that nurses would have at least as much to contribute. And the bias in the article is particularly clear when so much of it is not about research, for which physicians obviously continue to enjoy a staggering funding advantage over nurses. Instead, it’s about anecdotes drawn from direct care—care provided primarily by nurses and those under their direction. But this piece gives the false impression that the main providers of hospice care are physicians. Share your thoughts with author Judith Matloff on her physician centrism.

The other piece, “Medicare Slashes Star Ratings for 1 in 11 Nursing Homes,” by Jordan Rau and Elizabeth Lucas, reports on the U.S. government’s response to nursing homes’ failure to show that they are adequately staffed with registered nurses, specifically that they have an RN present at least eight hours every day. The article explains that Medicare now collects and publishes payroll data on nursing home staffing because the Affordable Care Act of 2010 requires it to do so. That is done instead of the past practice of relying on the homes’ own unverified reports, which it now appears under-reported staffing, particularly as to RNs.

The piece helpfully explains that RNs “are the highest-trained caregivers required to be in a nursing home, and they supervise other nurses and aides.” That’s impressive, so for expert comment, let’s go to David Grabowski, a professor of health care policy at Harvard, but not a nurse. His multiple quotes amount to finding this move by Medicare “a really good start.” The report goes on to explain that the government’s Nursing Home Compare website includes a five-star rating system for consumers, and that the new ratings give the lowest rating (one star) to 1,387 of 15,616 “skilled nursing facilities.” The piece includes a response from Katie Smith Sloan, the president of LeadingAge, an association that represents nursing homes. Also apparently not a nurse, Smith attributes the lowered star ratings to shortages of qualified staff, “nurses in particular.” The report includes detail about how Medicare assessed the nursing homes’ staffing; explains that staffing at the for-profit facilities that make up 70% of the industry was “substantially lower” than at non-profit and government ones; and says that Medicare released a statement about how it had “begun to leverage this new information to strengthen transparency and enforcement with the goals of improved patient safety and health outcomes.”

What the piece does not include, in all this discussion of the apparent value of having RNs around, is any input from RNs. As with too many reports even from elite media sources like the Times, the idea seems to be that nurses are more like pieces of equipment than autonomous professionals who could provide expert comment on health care, even with regard to their own work and its value. Wouldn’t it have been helpful to hear why having more RNs leads to “improved patient safety and health outcomes” in nursing homes? Who would know that?

An RN would, of course. But we can rectify that problem right now! If these institutions are only required to have one RN appear for 8 hours per day, it’s hard to see how we can call them “nursing homes” or “skilled nursing facilities” at all. That’s because extensive research shows that better nurse-to-patient ratios result in much better patient outcomes in a wide variety of settings, whereas low ratios greatly increase the risk of complications and, well, death. We might call facilities with too few RNs “assisted living homes” or “homes for the disabled” or “homes for the unfortunate,” but they should not even have “nursing” in the title unless RNs are providing at least half of the care. Authors Jordan Rau and Elizabeth Lucas–give us a call, and we’ll be happy to serve as sources for your next article on “homes for the unfortunate.” Please email Jordan Rau and Elizabeth Lucas at jrau@kff.org and elucas@kff.org, or send a tweet to Jordan Rau at @JordanRau and Elizabeth Lucas at @EKlucas, to let them know your thoughts on their failure to consult nurses for articles about nursing. Thank you!