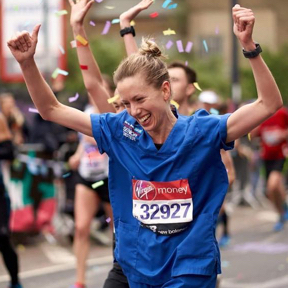 A BBC item was among those reporting that Guinness World Records had denied nurse Jessica Anderson its record for a woman completing a marathon in a nurse’s uniform after she ran in scrubs rather than the traditional dress and cap. Anderson is right that presenting the gendered traditional uniform as a symbol of nursing today damages the profession. Guinness has now vowed to review its category.

May 6, 2019 – On May 4 the BBC website posted an item by Catherine Burns reporting that Guinness World Records was refusing to recognize that nurse Jessica Anderson had just broken the record for fastest marathon run by a woman in a nurse’s uniform after finishing in about 3 hours and 9 minutes. The rationale given to Anderson was that she ran in scrubs, but the existing record is held by someone running in a traditional nurse’s uniform, and Guinness rules still require entrants of whatever gender who wish to compete in the “nurse” category to wear “a blue or white nurse dress, a white pinafore apron, a traditional white nurse’s cap. Tights are optional.” Anderson said that when she questioned these requirements before the race, Guinness told her that scrubs were too similar to the required outfit for someone running in the physician category, and that “to maintain a different level of challenge the ‘nurse’ costume has to be different, hence the requirement for the old fashioned, stereotypical attire.” Anderson found this requirement “outdated and frankly quite sexist,” noting that it “really has an impact on the public perception of nursing.” The story has now been covered worldwide, with predictable glee, and we understand that Guinness has vowed to review its guidelines for this category. We congratulate Anderson, and we think Guinness’s apparent notion that the nurse category should be kept antiquated because otherwise it would be too similar to the physician category is absurdly physician-centric. We admit that we don’t think someone running in scrubs deserves to take a marathon record held by someone running in a dress and cap, which would seem to be far more difficult because of constriction and added wind resistance. Indeed, a big reason that people wear scrubs is that they are much easier to move in. We urge Guinness to retire the traditional-nurse-outfit category, because we agree with Nurse Anderson that the message it sends damages the profession, which has long struggled to get the respect and resources it needs despite enduring female-oriented stereotypes. Indeed, Guinness itself has reportedly conceded that the required uniform is stereotypical. Presenting it this way suggests that the profession is limited to the female gender and the constraints traditionally placed on it. It says that nurses are not modern health professionals of any gender. By the way, so does referring to nurses as “sisters,” as the piece does in describing Anderson’s work at the Royal London Hospital. And contrary to the BBC’s description, we are not talking about a record for “fastest nurse to run a marathon.” Last month Tucson nurse Sarah Sellers finished the Boston Marathon in 2 hours, 36 minutes, and 42 seconds, 19th in the race. Nurses and their achievements are not defined by uniforms.

Please join us in sending feedback to the Guinness World Book of Record by sending a tweet @GWR asking them to end the old contest and begin a new one. Please copy us if there is room @TruthAbtNursing. Thank you! Below is our tweet to Guinness:

We understand validity requires that you compare apples to apples. But adhering to outdated rules fuels the global nursing shortage by not recognizing nurses as modern science professionals. Please end the old nurse category and establish a new one based on modern nurses’ attire— The Truth About Nursing (@TruthAbtNursing) May 6, 2019