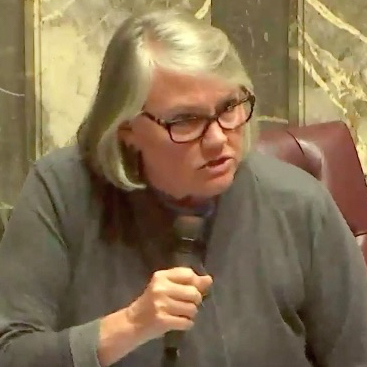 Washington state senator Maureen Walsh, seeking to exempt small hospitals from proposed rules that would limit mandatory overtime and ensure breaks, said nurses at those hospitals “probably play cards for a considerable amount of the day.” What a joker! In fact, research shows that rampant understaffing at U.S. hospitals contributes to nursing burnout and worse patient outcomes, including death.

April 16, 2019 – Today Washington State Senator Maureen Walsh said that nurses at small rural hospitals “probably play cards for a considerable amount of the day.” She was arguing on the state senate floor that such hospitals should be exempted from a pending bill that would protect hospital nurses from mandatory overtime and ensure they get uninterrupted meal and rest breaks. Walsh’s claim that nurses at these hospitals spend a lot of their day playing cards is a grotesque distortion of the reality that many nurses face today, one of understaffing so severe that they do not get any breaks at all. In fact, Walsh’s statement is not even based on some isolated anecdote, but instead is just a baseless assertion designed to distract and create doubt about real problems in order to impede reform. In other words, her argument has much in common with the famous street hustle Three-card Monte. According to a good report by Annette Cary in the Tri-City Herald, the Washington State Nurses Association responded to Walsh this way: “No, senator, nurses are not sitting around playing cards,” it said. “They are taking care of your neighbors, your family, your community.” Research shows that nurse understaffing in many care settings has contributed to burnout, turnover, and worse patient care, including higher rates of serious complications and, yes, the death card. Nurses, like other professionals who hold lives in their hands along with playing cards, need adequate rest. Nurses in smaller clinical settings must be ready for quick changes in patient loads and acuity levels, including through preparation during less busy times, so they are ready for wild card and full house situations later. In fact, reports indicate that Walsh herself benefited from nurses with the rest and time to provide quality care when she received treatment for her 2018 heart attack. We urge Walsh to throw her recent comments on the discard pile and start a redeal for the nurses who are trying to save lives in her community.

Maureen Walsh issued a statement designed to look like an apology, but it did not contain one. She half promised to follow a nurse for a day. But we would like to pressure her until she actually does.

Please send a letter to Maureen Walsh asking her to follow a nurse for a day. Thank you!

2 thoughts on “The death card”