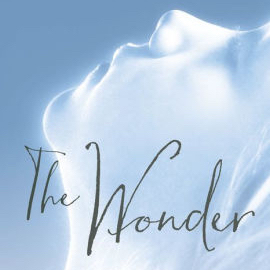 God is a woman

The novel tells the story of 19th Century London nurse Lib Wright, who is hired to observe an Irish “fasting girl” — a child who seems not to have eaten anything for months as part of her Catholic faith. On her own in a devout rural village, the rationalist Lib shows independence, skills, and patient advocacy.

2016 – Emma Donoghue’s The Wonder is basically a locked-room mystery novel. But it’s also a tale of corrupted love, faith, redemption—and nursing in the late 1850s. London nurse Elizabeth (Lib) Wright is hired to spend two weeks in an Irish village to observe what may be a miracle:  11-year-old Anna O’Donnell, a “fasting girl” who has apparently not eaten in four months. Lib served with the revered Florence Nightingale in the Crimea. She is rational, scientific, and very sure that this “wonder” must be a fraud. In fact, Lib initially shows contempt for the Irish Catholics who surround Anna; she finds them backwards and credulous. But over time a more complex reality emerges, and Lib ends up in a race against time. She is tough, bright, and skilled, displaying knowledge of a range of health matters and real professional diligence. She is also a bit lost in her post-war life—awkward, insecure, a bit pompous, and anxious to distinguish herself from less educated nurses and “menials.” Her experience in Scutari, and especially the world view of her mentor “Miss N,” is always with her. Physicians are presented as having formal authority over Lib in her care, but as a practical matter she mostly operates with autonomy and at times pushes back hard. She challenges the two main physician characters (both idiots) and tells her nursing colleague on the watch, a timid nun, that the best nurses know when to disobey “orders.” Lib generally subverts the angel image of nursing, with her sometimes fierce advocacy and her obsession with science and evidence. Indeed, she struggles to overcome her own biases toward those whose faith and backgrounds differ from hers. Despite some blunders, though, Lib makes critical deductions and takes decisive action for her patient. In the end she finds renewed purpose in adversity. At the novel’s core are strong females working to overcome an entrenched patriarchy and its corruption of spirituality. Maybe Lib stands for liberation! Donoghue suggests that the elite band of “Nightingales” who cared for British soldiers in the Crimea enjoyed some of the same national renown as their leader. But for Lib herself, the post-war years have been marked by personal losses and a position at a London hospital where she is resented and her skills seem wasted.  Lib soon learns that her advanced nursing skills are also not the main reason she’s been hired for the two-week job in Ireland. Instead, it’s to lend moral authority to a watch of the O’Donnell girl that is designed to test whether she really is a foodless wonder, an example of the power of her Christian faith, or instead a fraud perpetrated on or by the rural Irish folk who surround her. A committee of local lights has made the arrangements. Taking the other shifts on the round-the-clock watch of the farm girl is Sister Michael, who seems competent, but who wastes no words and closely follows her vow of obedience. Lib is sure that she, a Nightingale, will soon be able detect the fasting fraud. As time passes, though, her careful efforts to do that are confounded, and she begins to develop respect, then affection for the bright and kind but enigmatic Anna.  Lib has real health care skills. She displays an understanding of human physiology, if not always of human psychology. She also shows professional competence in observing and evaluating Anna’s condition, making notes and thinking deeply about what they mean. At least to some extent, the novel brings the reader inside the thought process of a well-trained 19th Century nurse. Because of her training and experience, Lib can do more than the basic custodial tasks that were expected of her in London, like feeding and bed-making. As she assures Sister Michael, she also has experience with surgical cases and diseases like cholera, dysentery, malaria, frostbite. At one point, contemplating a harsh procedure, Lib tells herself: “Hadn’t Lib debrided burns and picked shrapnel out of wounds, dragging more than a few patients back into the land of the living by rough means?” Lib admits to herself that she also spent much time at Scutari stuffing mattresses, stirring gruel, and at washtubs, but she doesn’t want to be thought “an ignorant menial. ” On the other hand, she also laments to herself that few understand how “saving lives often came down to getting a latrine pipe unplugged”—a good public health observation. In the end, events take a turn and Lib is confronted with wrenching choices. She ultimately responds with courage and what might be considered a fairly radical effort at psychosocial care.

The novel makes clear that Lib’s professional identity is based on Nightingale, her precepts and her forceful, if not rigid, views. It appears that “the Nightingales” were a new breed of nurse, one pointing to the future. Nightingale’s role in this novel recalls Anne Perry’s William Monk detective novels featuring former Nightingale Hester Latterly. Nightingale herself made a brief but galvanizing appearance in one of those. Nightingale does not appear in The Wonder, but maybe Donoghue felt no need because it often seems like the legendary nurse is present, as Lib refers repeatedly to her mentor’s ideas as she confronts the difficulties of the watch. In fact, watching is what “Miss N” taught her nurses to do, to see what the patient’s illness required – not medicine, the “doctors’ domain,” but things that were equally important for recovery: “light, air, warmth, cleanliness, rest, comfort, nourishment, and conversation.” Lib spends spare moments with nursing journals or Nightingale’s Notes on Nursing, “a gift from its author.” Lib also finds strength in Nightingale’s general precepts, perhaps because “every word Miss N pronounced rang as if from a mighty pulpit.” “Work hard and refuse God nothing.” “Can you throw your whole self into the breach?” “Better to drown in the surf than stand idly on the shore.” And her view of the Crimea, which could easily apply more broadly? “My teacher said this was the kingdom of hell, and it was our job to haul it a little closer to heaven.”

Like Nightingale, Lib subverts the angel image. She is scientific and rational, anti-religion if anything, although deeply moral, even moralistic. The book seems to suggest the limits of faith, including corruption among some believers. But it also questions a narrow adherence to reason and science, which do not seem sufficient to help Lib’s patient. And for much of the novel Lib is insecure, disdainful of the less educated, fairly arrogant and biased about the beliefs and practices of the Irish, the “rabble.” In these passages, it is not clear the author likes Lib very much.

Autonomy is always an issue. Lib is generally strong and a forceful advocate given the context, acknowledging that the male physicians are at least ostensibly in charge, but also willing to push back and disobey them to protect Anna. For a woman without much real status, financial means, or formal education to challenge socially powerful older men in the late 1850s is clearly no small thing. Lib also fights to keep Anna from gawking visitors and a prying journalist. By contrast, Sister Michael is obedient and too scared to advocate, although events reveal that she is not stupid, and she ultimately reveals some empathy and deeper understanding. Still, when Lib urges her to join in advocating to a physician about what is going on with Anna, the nun resists: “I’m only a nurse.” The Nightingale’s response? “I was taught the full meaning of that word,’ Lib raged.’ Weren’t you?’” Lib goes alone. It’s true that Lib’s advocacy is not always adroit or successful. But she is unable to contain her concern for her patient long, and is especially incensed by the calm acceptance she finds among the locals that a young girl is simply not eating. And there is no direct suggestion that in the future someone like Lib would be a physician; Lib expresses no desire to be one.

Of course, this book offers little that might attract anyone to practice medicine, beyond unearned power. Both of the physician characters are condescending and clueless. The main one, the local McBrearty who helps set up and manage the watch, starts out polite and genial enough. But he responds with condescension to Lib’s urgent ideas about what is really going on with Anna, and he seems to be deluded himself about what actually is happening. At one point, the author describes his dismissal of Lib’s ideas as “an indulgent father reproving a child.” McBrearty: “Leave such mysteries to those who’ve been trained for them. Your job is simply to observe.” Lib tolerates some but not all of this. At one point, after the physician declines to report Anna’s condition to the local organizing committee because it will look bad, Lib snaps, “How will it look if your old friends let their daughter die?” McBrearty: “Is this how Miss Nightingale taught you to speak to your superiors?” Lib: “She taught me to fight for my patients’ lives.”

Then there is Dr. Standish, eminent chief of medicine at a Dublin hospital. Abusive, contemptuous, and ignorant, he disregards Lib’s input and shoots off misdiagnoses. He demands that Anna receive “a quart of arrowroot in milk, three times a day.” Lib says Anna will not accept that. Standish: “Then drench her like a sheep, woman!” For such patients, he says, “my nurses have standing orders to use a rubber tube, above or below.” Lib steps between him and Anna: “Only Dr. McBrearty could give such an order, with the permission of the parents.” He storms out. Lib considers if he may be right on some points, but she does not follow his care plans.

In the end, Lib is changed. Less rigid and biased herself, she is more understanding of different traditions, yet she stands fast on core moral values, finding reserves of strength in advocating for her young patient. In some senses both Lib and Anna are threatened by male dominance and too little support from other women. The thing is whether they can save each other.