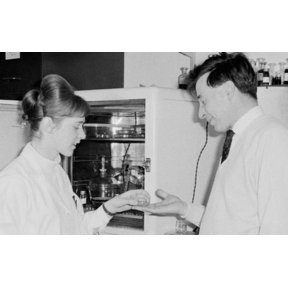 Archival letters show in vitro fertilization pioneer Robert Edwards pushing without success for recognition of his “equal” partner Jean Purdy in plaques honoring their work leading to the first test-tube baby in 1978. The Guardian did a good job highlighting the role that Purdy’s status as a nurse, and not a physician, likely played in her omission. But a BBC piece failed to even mention she was a nurse.

June 10, 2019 – The “female nurse and embryologist” Jean Purdy was omitted from a plaque honoring the in vitro fertilization (IVF) pioneers responsible for the world’s first “test-tube baby,” despite protests from a physician colleague, according to just-released archival material. A Guardian piece did a good job of exploring the extent to which Purdy’s nursing status was a key factor. But a BBC item on the same topic failed to say that Purdy was a nurse at all, referring to her only as an embryologist and a “woman in science.”

On June 10, the Guardian ran a good article by Josh Halliday explaining that Purdy was one of “three scientists” whose work led to the 1978 birth of Louise Brown. But Purdy’s colleagues “Prof Sir Robert Edwards and…surgeon Patrick Steptoe” received most of the praise. Letters from Edwards’s archive now show that he tried repeatedly in 1980 and 1981 to persuade the Oldham Area Health Authority to include Purdy on plaques planned for the hospitals involved in the feat. He called Purdy an “equal contributor.” An administrator responded that the plaques would name Edwards, Steptoe, “and their supporting staff.” Cambridge University archivist Madelin Evans said the letters did not reveal a specific reason for Purdy’s exclusion. But Evans speculated, very plausibly, that “it probably had quite a bit to do with the fact she was a nurse, an embryologist and a woman…and the fact probably that nurses weren’t seen as important maybe as doctors and scientists.” The Guardian also reported that “Purdy became so indispensable [to the IVF project] that work stopped for several months when she had to care for her ailing mother.” Meanwhile, Edwards got a Nobel Prize in 2010 (Purdy and Steptoe had since died).

Also on June 10, the BBC posted an unsigned report on the same topic. But this one omitted the fact that Purdy was a nurse. Under the headline “Female scientist’s IVF contribution was ‘unrecognised’,” the item had many of the same basic facts as the Guardian, but it referred to Purdy only as an “embryologist” and a “woman in science.” It did add that Purdy “helped to set up Bourn Hall in Cambridgeshire in 1980 as the world’s first IVF clinic,” and that an estimated six million babies have been born globally through IVF. But because the piece failed to say that Purdy was a nurse, nursing will get no credit for any of that with the BBC’s audience. That is a critical omission, since millions of “women in science” today are nurses who continue to struggle for adequate resources—and the social esteem they need to get those resources.

See the June 10, 2019 article posted on The Guardian‘s website: “Female nurse who played crucial role in IVF ignored on plaque.”

Update: Plans are now underway to put Jean Purdy on a plaque to honor her! See the July 15, 2019 article in Bio News: “Plaque to finally honour snubbed IVF pioneers.”