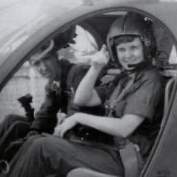 An obituary in today’s Post reports that Hays, chief of the Army Nurse Corps, became the U.S. military’s first female general in 1970. The piece has some good details about Hays’s advocacy for Army nurses and women in the military, including that she “persuaded the Army that nursing was important enough to spend money on.”

January 8, 2018 – Today The Washington Post ran a generally good obituary for U.S. Army General Anna Mae Hays, a nurse who in 1970 became the first female general in the U.S. military. As Harrison Smith’s piece explains, Hays began her nursing career in World War II, when she treated patients in the “China-Burma-India theater.” She later served as chief of the Army Nurse Corps for four years, until her retirement in 1971. The piece suggests that her time as chief included efforts to advance the interests of nurses and women in the military. That included persuading the Army to “expand scholarship opportunities and educational requirements for Army nurses,” helping to establish maternity leave for female officers, and eliminating some rules that had limited the opportunities for mothers to serve in the military at all. The obituary does have a couple problematic parts. It says that Hays “began assisting doctors at a dirt-floored hospital in Ledo, India, in January 1943,” which undermines the sense of nursing autonomy that the rest of the piece conveys. And the report treats as harmless fun the kiss on the lips that Gen. William Westmoreland reportedly bestowed on Hays at a June 1970 Pentagon ceremony for her historic promotion to general. Apparently Westmoreland joked that this was “a new protocol for congratulating lady generals.” On the whole, though, the obituary gives readers a valuable look at a pioneer for military nurses, and we thank those responsible.

The obituary was headlined “Anna Mae Hays, nurse who became U.S. military’s first female general, dies at 97.” It explains that Anna Mae Violet McCabe graduated from high school in Allentown, PA, and got a nursing diploma from Allentown General Hospital’s School of Nursing in 1941. She would also get a bachelors degree in nursing education from Columbia University Teacher’s College in 1958 and a masters in nursing from Catholic University in 1968. She took her surname from husband William Hays, who died in 1962.

Hays joined the Army Nurse Corps after Pearl Harbor. She served at what the piece describes as a “mud-caked jungle hospital” in Ledo, India, where she “began assisting doctors” in January 1943. The piece describes her World War II work in some detail.

Working in a malaria-infested stretch of the China-Burma-India theater, she treated gangrenous construction workers who were building a new roadway that supplied the Chinese military in its war against Japan, as well as lice-infested members of the special-operations Army unit known as Merrill’s Marauders. Most of her staff was sick with malaria, dysentery, or dengue fever, she later said in an Army oral history, and at one time she found herself hospitalized and spotted a cobra under her bed. She calmly asked a guard to shoot it, later explaining, “When one lives in the jungle, one can expect that sort of thing.”

The piece notes that Hays spent a lot of her time between wars at Walter Reed Army Medical Center in Washington DC, where she served as chief nurse of the emergency room. While there she met President Dwight Eisenhower, “who was hospitalized for an intestinal disease for about one month in 1956 and whom she considered a lifelong friend.” The piece might have noted, as some other reports do, that Hays served as one of the President’s nurses during his stay.

Hays became chief of the Army Nurse Corps in 1967 and served in that role until her retirement four years later. During that period, the height of the Vietnam War, she oversaw “a 4,500-person nursing corps [which relied on] robust use of antibiotics, whole-blood transfusions and speedy helicopter evacuations.” The obituary describes her efforts to effect change within the military:

As part of an effort to expand scholarship opportunities and educational requirements for Army nurses, Gen. Hays “persuaded the Army that nursing was important enough to spend money on — a hard sell at that time,” said Sanders Marble, senior historian in the Army’s Office of Medical History. She also helped push through Army policy changes that paved the way for women in the military, including the 1970 establishment of maternity leave for female officers. Through her efforts, married officers were no longer automatically discharged from the ranks for becoming pregnant, and a provision was removed that limited mothers’ ability to join the Army Nurse Corps Reserve.

The obit spends some time on her historic promotion. After legislation passed under President Lyndon Johnson that made female generals possible, the item says, President Richard Nixon selected Hays and Elizabeth Hoisington, chief of the Women’s Army Corps. Hays “became a symbol of unprecedented female advancement on June 11, 1970, when she was promoted to the one-star rank of brigadier general.” At the Pentagon ceremony, Westmoreland “gave her the rank’s silver star insignia and what Time magazine described as ‘a brassy kiss’ on the lips”; he “joked” that it was “all part of ‘a new protocol for congratulating lady generals.’” The piece says that “the congratulatory peck has gone by the wayside,” with dozens of women becoming generals in later years. But in 1970, Hays’s promotion “was greeted with astonishment from some quarters and derision from others.” The piece gives the last word to Westmoreland’s wife Kitsy, who reportedly told General Hays—while both were “at the hairdresser’s”—that she wished Hays would marry again: “I just want some man to know what it’s like to be married to a general.”

This obituary is a generally good portrait of a nursing pioneer. It shows that nurses can be leaders in a general sense through Hays’s high-ranking positions, of course. But it also includes some details that promote understanding of the profession’s value, especially the advanced degrees Hays received and her work to enhance the education of military nurses, as well as fairer treatment of women generally, all of which presents a nurse as a strong advocate. And some of the anecdotes, including her cool reaction to the cobra, remind readers how tough nurses must be. The main downsides are the unfortunate (but still common) reference to “assisting” physicians, which undermines the sense of autonomy the rest of the piece promotes, and the treatment of Westmoreland’s kiss, which makes light of what sounds like a very public example of sexual harassment, something many nurses still face today.

On balance, though, we thank Harrison Smith and the Washington Post for a helpful look at a nursing leader.

See our other obituaries of nurses:

Also see our Pioneers of Nursing and please let us know if you would like to write one for us on your favorite pioneer:

1 thought on “A new protocol”