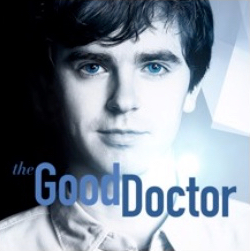 On ABC’s The Good Doctor, physicians do everything and nurses rarely appear

The first season of the hit hospital drama from David Shore (House) features a surgical resident with autism and savant syndrome. The show challenges some social stereotypes, but at the same time, it strongly reinforces the stereotype that nurses are low-skilled physician lackeys who are barely involved in hospital care.

March 2018 – The first season of ABC’s The Good Doctor showcased the physician-centric vision of hospital care we would expect from House creator David Shore. The prime time television drama focuses on Shaun Murphy, a brilliant young surgeon with autism and savant syndrome. Shaun can perform amazing medical feats, but he also faces daunting social challenges. Six of the show’s eight main characters are physicians, none are nurses, and in the great majority of clinical scenes, nurses do not even appear. When they do, it is typically as meek assistants, receiving commands from the physicians or silently completing basic tasks, like handing the physicians things during codes. In a couple episodes early in the season, nurse characters do emerge from the background to play minor roles that underline Murphy’s unique situation. In the first one, an attending surgeon assigns an experienced nurse to supervise the clueless new Murphy for the day, as he performs what the show regards as scut work. At one point this nurse says that physicians rarely listen to nurses. But the show never really tells us why they should. Indeed, this nurse character is a battle-axe who focuses on protocols and throughput but shows little real skill or interest in helping patients. Instead, the show has Murphy do that, in a typical Hollywood plot with physician characters heroically overcoming bureaucratic obstacles–like difficult nurses. In the second plotline, a veteran emergency nurse delivers a few authoritative-sounding lines in preparing for a mass casualty event. Later, in a brief staff discussion, the subject of marriage comes up. This nurse teases Murphy about whether he wants to marry her, banter that may be less about the naughty nurse stereotype than Murphy’s social isolation, but it is arguably problematic even on those terms. In any case, The Good Doctor soon outgrew these awkward nods in the nursing direction. The last two thirds of the season showed physician characters delivering all the care that mattered in the hospital, including all patient interactions, while nurses appeared, occasionally, as low-skilled helpers. See this 30-second clip, and read more below…

The September 2017 series premiere establishes the premise, as the young, anxious physician Shaun Murphy travels from his small town to start a surgical internship at a major San Jose (California) hospital. He is there because his longtime mentor, dating back to when he was 14, just happens to be the physician who serves as the hospital president. This physician manages to hire Shaun despite strong reservations from members of “the board,” who are concerned about his autism. From the earliest hospital scenes it is apparent that only the many physician characters will matter. In the premiere, one nurse appears to put on Shaun’s surgical mask and glasses, a telling representation of the nurses’ overall role. Later episodes confirm that most scenes will be the physicians talking to each other, or to patients and families, and that when nurses appear at all, it will typically be in the background. Nurses may briefly appear to absorb a command for tests, equipment, or medication, to hand something to the physicians, or to report a vital sign or some basic logistical fact (e.g., the availability of ORs). But they rarely speak and never interact verbally with patients or each other. They only exist to serve physicians. There is also what we call “physician nursing.” That happens when physician characters handle the patient relations and family support and education that nurses would likely do in real life, and at times they perform specific interventions that nurses would likely do. In a November 2017 episode, the physician residents seemed to be giving medications, as nurses normally would.

Nurse characters do emerge from the background in two early episodes, although even then, their roles are mixed at best. The second episode of the season has a very Grey’s Anatomy-like scene in which the senior surgeon Melendez assigns Shaun Murphy what the surgeons regard as scut work, hoping he will fail. Shaun seems to go overboard, ordering too many tests. A nurse named “Fryday” at first resists this, mildly, wanting to move patients along more quickly, but soon she decides to just let Shaun do it his way. Eventually Melendez returns and chastises Shaun for wasting time and resources. Fryday titters in the background, like a school child enjoying Teacher’s scolding of a classmate. Melendez turns on her, asking if it’s her job to silently let Shaun screw up. She actually pushes back, saying that in her experience, physicians don’t listen to nurses, and they only talk to them when yelling at them for messing up. Melendez doesn’t dignify that with a direct response, but he puts the nurse in charge of Shaun for the day, as if physicians have that authority (they don’t), and as if nurses have time to spare to watch over a physician intern all day. This is obviously meant to be degrading to Shaun, but it is actually degrading to nurses, presenting them as a class of physician lackeys. Of course, nurses do teach junior physicians, but Fryday does not do much of that, apart from explaining to Shaun that one patient’s skin is discolored because she is old. In one case, Shaun is forced to discharge a girl with stomach pain that others view as a result of stress. But Shaun sees that her test results indicate she has a life-threatening condition. He goes to her house, finds her unconscious, and rushes her back to the hospital. She clearly needs surgery, but nurse Fryday, now in obstructive bureaucrat mode, won’t let Shaun proceed without Melendez’s OK. However, Shaun notes that it is so late that it is no longer the “today” Melendez specified in defining the nurse’s authority over Shaun, so she is no longer his boss. Thus freed from protocol nursing, Shaun arranges the surgery, which is successful, and he receives credit from the grateful parents.

This nurse character is a battle-axe, in the modern form of the rule-bound hospital bureaucrat, someone with a little power–perhaps temporary power as in this case–but who cares only about patient throughput and following rules, not about patients or colleagues. She is also a bitter serf amid physician nobles, like similar characters on Grey’s, someone who resents physicians and is looking for ways to stymie them. Her one good point, about physicians not listening to nurses, has little value because the show give us little reason to see why they should listen. Fryday’s work seems to about serving physicians, not patients, and even in that context all we really see her do is snipe and obstruct. Putting a nominally helpful message in the mouth of a character like that is probably a net loss. Fryday? Girl Friday, maybe.

The other notable nurse appearance came in episode 6. In that one, we see an apparent nurse at first talking on a phone, then walking around issuing commands to no one in particular: “ER. How long? Got it. Listen up, everybody, we got a mass cas. coming in, bus crash, two dozen passengers. Transfer all patients waiting for beds up to the nursing units. Have maintenance bring down cots, we’re going to convert the waiting room into triage. No one goes home till we’re all clear!” The surgical residents seem a little shocked by this carnage. The nurse has to drag Shaun, in particular, to a patient, who is bleeding out. But rather than acting to address that problem, both the nurse and a nearby paramedic wait for Shaun to assume control. Eventually he does and calmly issues orders, which the others follow. In particular, Shaun brilliantly jerry-rigs a tool, something the nurse has never heard of that occludes a damaged artery and stops the bleeding. The nurse gives Shaun a smile and says, “Nice work, Dr. Murphy.” Later, in a slower moment, the attending surgeon Melendez is asked about the details of his upcoming wedding. The nurse discloses that she has her wedding all planned out, with the dress and the flowers, “all I need is the groom. You available, Dr. Murphy?” The character is considerably older than Murphy and is clearly teasing him. Murphy: “No.” Nurse: “You don’t want some love?” Murphy: “No, no I don’t want love.” And he walks away.

This nurse is commanding and confident, especially in calling out instructions at the beginning. However, viewers will not necessarily conclude she has much specific health care expertise. She waits for the neophyte Murphy to tell her what to do with a patient who is bleeding out. And she has never even heard of the implement he creates to save the patient. In addition, she is nameless, which reinforces the sense that nurses are interchangeable support staff. She orders patients to be sent to “nursing units,” but all inpatient units are nursing units, since they exist to provide nursing care. Finally, there is the marriage proposal. It is clear that the nurse is teasing Murphy, in a self-deprecating way. The idea seems to be to underline how socially isolated Murphy is, not to suggest that the nurse is really interested in him romantically. On the other hand, given the naughty nurse and related golddigger stereotypes, even casual suggestions of romantic interest in physicians can be problematic if they include a sense of the different statuses of the two professions. And to the extent the nurse’s teasing here is specifically targeting Shaun’s autism, it could easily be seen as insensitive, even a form of battle-axe behavior.

More importantly, even in these two plotlines in which nurse characters actually play some limited role in bantering or bickering with physicians, it’s important to note that it does not involve patients. Having nurses interact with patients might suggest that they have an independent responsibility to care for patients, that nurses do not simply serve as physician helpers. But suggestions like that have no place in a fantasy universe in which only physicians matter.

Click here to join us in sending a letter to the producers of The Good Doctor!