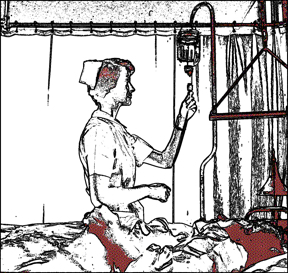 The New Yorker on why we’re “perpetually short” of nurses

James Ledbetter’s “Currency” feature from November 2015 examined the causes of chronic U.S. nursing shortages, rightly focusing on insufficient resources for education and the demands of nursing practice. But it did not place enough emphasis on other key factors, such as nurse understaffing and the undervaluation that drives it.

November 3, 2015 – Today The New Yorker published an online “Currency” item by Inc. magazine editor James Ledbetter about why the United States is “perpetually short of nurses.” The piece rightly cites resource shortages in nursing education, especially relatively low pay for faculty, as well as the demands of clinical nursing, which lead many nurses to leave and return to practice in accord with economic conditions. Ledbetter acknowledges some shifts driven by the market, such as the assumption by less-skilled workers of tasks formerly done by nurses; he is noncommittal about whether that is good or bad. But he is skeptical that the market alone can fully address nursing shortages, concluding that we may also need “increased emphasis on building hospitals and unblocking the education bottleneck.” This piece includes valuable observations about nursing shortages and the challenges of nursing practice. However, the picture it presents is somewhat distorted. We can’t really conclude (as Ledbetter seems to) that the nation has been continuously short of nurses for the last 50 years just because commentators in 1965 and 2015 decried shortages at those points. And he does not place enough emphasis on some critical factors underlying the current shortage, which in many settings is now more a matter of too few funded nursing positions to provide needed care. These factors include undervaluation of the profession among decision-makers, as reflected in existing power and resource structures; the continuing gender disparity in the profession, which Ledbetter mentions only in the context of the cyclical employment choices of married females; and increasing demand driven by an aging population and the explosion of new care technologies. The piece really takes no position on whether a certain number of nurses is needed to provide safe care, but research clearly shows that more nurses mean better outcomes. And Ledbetter’s prescription to address the shortage is incomplete. More resources for education is critical, but “building hospitals” will do little if they are not filled with enough skilled, empowered nurses to keep patients alive and create a bearable work environment. He might also have mentioned recent events that may help nursing, including the growth of advanced practice nursing and the increased focus on preventive care in the era of Obamacare. Still, this piece encourages discussion of real challenges in modern nursing, and we thank those responsible.

The headline is direct: “Why Is the U.S. Perpetually Short of Nurses?” Ledbetter cites two New York Times editorials warning of nursing shortages. The first, from 1965, notes the need for “better salaries, working conditions and public recognition” to attract more nurses, while in the other, from 2015, author Alexandra Robbins notes: “The more patients assigned to a nurse, the higher the patients’ risk of death, infections, complications, falls, failure-to-rescue rates and readmission to the hospital—and the longer their hospital stay.” So Ledbetter asks: “Is it really possible that the United States has not had enough nurses for half a century?” First, the existence of shortages 50 years apart does not, obviously, show that shortages existing all through the intervening 50 years, although there certainly have been periods of shortage, both since 1956 and long before. Second, these two editorials are not talking about precisely the same problem. The first appears to be addressing a straightforward shortage of nurses to fill available positions, but the Robbins quote is about a shortage of nursing care due to decisions not to fund sufficient nursing positions, a common situation today even as the number of open nursing positions has fallen in the wake of the Great Recession of 2008. That is why one 2012 study Ledbetter cites notes that employment of RNs in hospitals actually rose quickly during the recessionary period; many positions have been filled, but that doesn’t mean patients are getting enough nursing. Thus, Ledbetter’s pondering about why the usual rules about labor-supply have not resolved the shortage is a little off. Candidates have in fact been attracted to nursing during a difficult economic period and in light of efforts to highlight the profession’s positive aspects, including pay that is good relative to the amount for formal education required.

It is true that, as Ledbetter says, studies continue to project shortages of nurses over the coming decades. He notes that although about 2.7 million RNs are currently working in the U.S., a 2010 survey found that another half million are not working in nursing. Before addressing why that might be, Ledbetter correctly cites serious problems in nursing education. The piece notes that “as both Times editorials suggest, nursing is very demanding, and the education required is rigorous, in terms of both its duration and the level of specialized knowledge required.” He goes on to note that, presumably today, there is a faculty shortage because qualified instructors can generally earn more money in the clinical setting (he calls this “actually working as nurses,” although of course nursing professors are “working as nurses”). Ledbetter also says that one report found that “last year seventy-eight thousand applicants to nursing programs were turned away because there were not enough teachers for them.” And in fact, that basic problem has existed for many years.

Turning to clinical practice, the piece makes some good points about why “the work is difficult enough that a large percentage of nurses leave the profession at some point in their careers.”

Anyone who knows a nurse has probably heard some scary stories about getting jabbed with needles or attacked by patients. While nurses tend to be satisfied with their career choice, fully half of them worry that the job has harmed their health. Some surveys of nurses have also found dissatisfaction with wages, hours, technological complexity, and administrative burdens.

The piece says that academics call nursing “countercyclical” because many nurses tend to begin or return to work when the overall economy is bad, in part because most nurses are married females who may, as a New England Journal of Medicine study found, “rejoin the workforce or change to full-time status to bolster their household’s economic security.” The article also discusses “regional discrepancies,” with notable recent nurse shortages in many Western states. But at the same time the piece calls into question whether an “ideal” number of nurses for the general population can even be determined, slipping in a couple sentences about nurse staffing:

A federal law requires “adequate” nursing staff at any hospital that participates in Medicare, but the term is not defined. Some states have laws requiring a certain ratio of nurses to patients in particular health-care sectors, but most do not regulate the issue at all.

This seems to collapse two things that should remain distinct: whether there are enough nurses to provide safe care in a particular clinical setting is not the same as whether there are enough nurses for an entire population. Of course, they may be related, but it may also be the case—as it often is today—that more nurses would be available to join a given care setting if decision-makers allocated the funds to support more positions. Wrapping up, the piece does ask, given the “perpetual nature of the crisis,” whether different policies are needed to help the market. Ledbetter suggests that the market may actually be making some adaptations on its own:

Some medical professionals suggest that the health-care system has reduced its need for nurses by assigning some tasks to other types of workers, such as nursing assistants, technicians, and orderlies. Such shifts may or may not be welcomed by nurses themselves and could also involve compromises in the quality of care.

Yes, and the piece might have noted that research shows when those “shifts” include understaffing of nurses, the “compromises” include worse patient outcomes and higher mortality, as well as increased nursing burnout and turnover. Ledbetter closes by recommending that it would be better to “improve the ways we attract and train nurses [through] increased emphasis on building hospitals and unblocking the education bottleneck.” Although increasing resources for nursing education is critical—assuming that’s what Ledbetter’s “roadblock” formulation means—building hospitals will have little effect if there are not willing, empowered, and well-supported nurses to staff them. Similarly, some press stories since 9/11 have wondered if there will be enough “beds” and “ventilators” in the event of future mass casualty events, as if those objects can provide care on their own. (Yes, some stories have also asked whether there will be enough “doctors,” but they can’t provide nursing either, except on television dramas.)

We have one final note, about the image that accompanies this online piece. It is a photo of a young white female nurse, standing in profile and adjusting a patient’s IV drip while wearing an old timey white dress and cap. Maybe the editor was going for something that would suggest the era of the first Times editorial in 1965. And showing the IV work does at least suggest that nurses do something substantive. But it is so common to present regressive stock images of white female nurses, rather than any diversity or a modern clinical uniform, that it can seem as if the nursing image itself remains stuck in a time warp, and nurses will always be viewed to some extent as virtuous white female angels without much of a substantive role. Going forward, will a lot of bright career seekers want to join a profession with that enduring image?

See James Ledbetter’s “Why Is the U.S. Perpetually Short of Nurses?” in the November 3, 2015 issue of The New Yorker.

1 thought on “The currency of care”