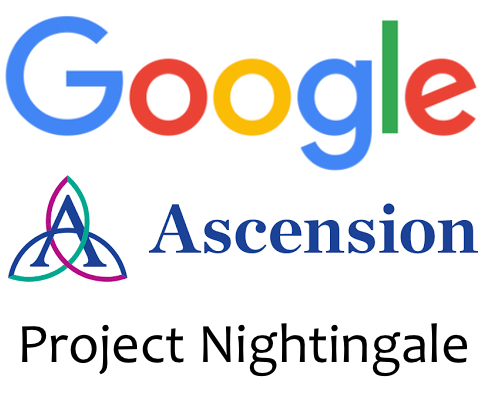 According to news sources, Google has gotten access to the identified health data of some 50 million patients, without their knowledge, as part of an A.I. / machine learning project with Ascension. But as the whistleblower who revealed the project explained in an op-ed, this presents real risks. One is to the nursing image, since the effort is known as “Project Nightingale”—a reference to the nursing pioneer known for using data to advance public health, not to amass wealth and power.

November 21, 2019 – A November 11 report in The Verge summarized news reports that Google had been pursuing an effort called “Project Nightingale.” It seems that Ascension, a large health provider, has given the tech giant access to extensive personal health data of some 50 million people, so it can develop advanced artificial intelligence and machine learning tools. The Verge summary explained that The Wall Street Journal had first revealed the effort, of which “neither the provider’s doctors nor patients were made aware.” According to the Verge report, Google maintains that the project is a standard one under which it only designs tools for Ascension and the security of the data is well-protected. Ascension itself quickly issued a press release making similar assurances, as well as a clarifying statement by an executive which, among other things, explained that the project’s name “reflects the work of Florence Nightingale, a trailblazing figure in nursing who greatly affected 19th– and 20th-century policies around proper care.” That at least showed some desire to explain why Nightingale was linked to this project. We saw no other major press accounts doing so. Even the whistleblower’s own op-ed in The Guardian today, which expressed grave concerns about data security, made no effort to explain the name. So, why Nightingale? Is it just a sense that nurses are revered and so a perfect naming choice to legitimize a dubious health-related effort by a massive corporation with some public relations issues, much as drug company Johnson & Johnson has long tried to enhance its troubled public image by associating itself with nursing? Or do those involved in the Google project actually know that Nightingale was a pioneer in the use of health statistics whose work did not just change policies “around” care, but actually changed care? Nightingale wasn’t perfect, and ironically she was not at all like the shy, submissive figure that she often seems to cut in the public imagination. But she did care greatly about her patients and public health generally. Modern nursing does not deserve to have its founder or its own image exploited in an effort to put a happy face on another potential data security misadventure by one of the tech giants.

Please click here to join us in urging Google and Ascension to change the name of their project to one that does not associate itself with nursing.