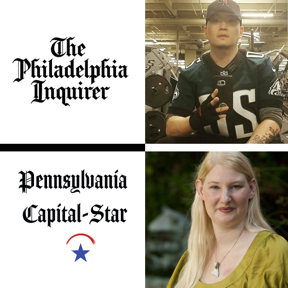 A February 2019 op-ed in The Philadelphia Inquirer opposed the criminalization of health care errors, using the case of a Tennessee nurse to illustrate how system failures are often the main cause. And an April 2019 piece in the Pennsylvania Capital-Star urged reform to enable those who experience sexual assault to get care and forensic exams from the nurses who are the true experts.

April 25, 2019 – Recently nurses have published strong op-eds in diverse Pennsylvania media sources, advocating on health policy issues with special urgency for nursing. On February 21, critical care nurse Jason Jaewan Lee had a persuasive op-ed in The Philadelphia Inquirer arguing against the criminalizing of health care errors. He cited a recent case at Vanderbilt University Medical Center in which a nurse had been charged with reckless homicide because of a fatal drug error. Those who commit such errors should be held accountable, Lee wrote, but scapegoating nurses fails to change the larger structures that often play the key role in the errors. He discussed in detail the flawed hospital care systems that seemed to place the Tennessee nurse in an untenable position in giving the medication in question. And today, Pennsylvania State University nursing professor Jocelyn Anderson had a compelling op-ed on the non-profit news site Pennsylvania Capital-Star (Harrisburg). She argued for reversal of a Pennsylvania state policy that means those who experience sexual assault must receive care at the same facility where they initially present. Anderson explained that this policy often prevents access to the Sexual Assault Forensic Examiner (SAFE) nurses who are the real experts, noting that too many patients are faced with care by other providers who are not qualified, and the quality of care suffers, as research shows. We note that Hollywood exacerbates this situation when it shows physicians ably providing all important care to such patients. In a ridiculous March 2019 Grey’s Anatomy episode, for example, three surgeons seemed to provide all psychosocial care and forensic procedures to such a patient at a major urban hospital—where in real life that is, fortunately, now unlikely. In any case, we thank those responsible for these op-eds, which showcase nurses as expert professionals who can and should weigh in on important health policy issues.

The Inquirer piece was headlined “Criminalizing health care professionals’ mistakes dodges the real problem.” The author was nurse Jason Jaewan Lee, who the piece notes was educated at the University of Pennsylvania, then practiced at its hospital, and now practices at Mt. Sinai in New York. Lee argued that filing criminal charges against health workers for mistakes not only imposes undue punishment but also “lets health-care systems off the hook.” He explained that nurse RaDonda Vaught of the Vanderbilt University Medical Center (VUMC) had recently been indicted for reckless homicide, for a drug error in which patient Charlene Murphy died after getting the paralytic medication Vecuronium, rather than the sedative Versed, during a radiological exam. In particular, Lee argued that even if Murphy had gotten the prescribed medication, Versed, problems may have occurred, because patients getting such drugs should be on a breathing machine and have cardiac monitoring. And, he said, the drugs should only be administered by anesthesia professionals or critical care nurses in intensive care. Apparently none of that happened here, and there was also a failure to monitor Murphy’s vital signs. Lee described these events as “system and collective staff failures.” He argued that “the culture of patient safety remains reactionary and litigious, without institutional accountability.” Instead, he urged a holistic approach:

Yes, Vaught should be held accountable, but so should institutions and their leadership. Healthcare leaders have a moral imperative to change the culture of cover-ups and stop blaming frontline workers when errors occur. Instead, they should uncover unsafe systems in their hospitals. We deceive ourselves if we think locking away individuals and hurting institutions financially will ever end preventable hospital deaths.

Of course, these are the types of arguments that nursing advocates have made for years, for example following a 2006 error by Wisconsin nurse Julie Thao, in whose case understaffing appeared to played a critical role. Lee makes a valuable contribution here, not only in continuing to urge appropriate holistic responses to clinical errors, but also in showing readers a thoughtful and expert nurse advocate. The piece might have specified Lee’s professional credentials, but at least it did associate him with highly regarded health institutions.

The Capital-Star piece was “This important state policy change on sexual assault care is long overdue.” The author was Jocelyn Anderson, “an assistant professor at Penn State and a Telehealth Sexual Assault Nurse Examiner.” Anderson asked readers to imagine being rushed to the emergency room and diagnosed with a brain tumor, but instead of a neurosurgeon, “the kidney guy is going to take your case instead.” She said no one would tolerate that, but that is the basic situation hundreds of Pennsylvanians who experience sexual assault face because of a state Department of Health policy that “requires that a patient receive medical and forensic care at the hospital to which they initially present,” even if no skilled sexual assault examiner available.

We know that access to trained sexual assault examiners improves health and justice outcomes. Patients are more likely to receive the correct medications to prevent HIV and other sexually transmitted infections when a trained and competent sexual assault nurse examiner (SANE) is involved in their care compared to Emergency Department personnel without this specialty training. Research has shown that trained SANEs collect better evidence than untrained providers, and reported cases are more likely to move forward in the criminal justice system when a SANE is involved.

Now you’re thinking, “Wait, wait, wait, did she just say that a registered nurse could provide better care than physician?” Yes, I did. Not because physicians don’t care or are not awesome at their jobs. They just aren’t trained in the specialty that is sexual assault care. Medical schools and residency programs are not required to provide any training on sexual assault or trauma-informed care.

Anderson explained that by contrast, the curriculum for the International Association of Forensic Nurses is 40 hours of classroom training and 40 hours of supervised clinical training, including “patient responses to trauma, working with sexual violence advocates, evidence collection and preservation, collaboration with law enforcement, injury identification and photography, and courtroom testimony.” Surveying options for reform, Anderson noted that Maryland has designated regional centers where high-quality sexual assault nursing care is available. Texas similarly designates some hospitals as “Sexual Assault Forensic Examiner (SAFE) – Ready” and requires that patients be offered no-cost transfers to them. And, she noted, the U.S. Department of Justice is exploring telehealth options to provide support to rural areas where transport may not be practical. She concluded by saying “#timesup”: those who are sexually assaulted should have “the same evidence-based expert care that we expect with every other health problem.”

This is a persuasive and authoritative piece on a critical health policy problem by a true nurse expert. Anderson frames the issue in compelling terms, provides explanations with specific details—including the training SAFE nurses get that physicians generally do not and the research showing the superior outcomes they achieve for patients—and then offers a range of practical solutions. And the piece’s nurse identifiers are not bad, although it would have been better if Anderson had also been listed as an RN, PhD, and if it had been made clear that she is a professor of nursing. Still, on the whole the piece is very helpful, and we thank those involved.