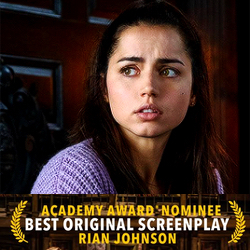 Rian Johnson’s comic “whodunit” made a splash with Daniel Craig’s hard-to-resist private detective character Benoit Blanc. But a key element was Ana de Almas’s nurse Marta Cabrera, who displayed a range of critical skills in a movie that exposed socio-economic disparities amid all the twists and turns.

Knives Out is a clever “whodunit” featuring the deceptively strong nurse character Marta Cabrera. Marta is the trusted home care-giver of Harlan Thrombey, a wealthy mystery writer and a commanding patriarch on whose financial support his family has come to rely. But after Harlan dies suddenly on his 85th birthday, it becomes clear that his recent decisions have given some characters reason to take drastic action against him. In investigating Harlan’s death, local police are joined by a famous private detective, the Southern-drawling, New Yorker–profiled Benoit Blanc. And like Harlan before him, the astute Blanc sees something special in Marta.

Marta does not spend a lot of the film nursing. But she does show health knowledge as well as the ability to act effectively under pressure. Operating autonomously, she displays particular skill with medications and resuscitation, even saving a life. At one point Marta jokingly asks Harlan if he wants to “do drugs,” meaning to receive his regular small dose of morphine to help him sleep. Some might object that this trivializes serious matters, but in context it is clear that her intent is simply to give him an appropriate administration of medication. It is also true that part of the plot turns on whether Marta has made an error in confusing two medications with almost identical packaging. However, plot twists make the issue a complex one, and it’s hard to say more without revealing them. In fact, the plausibility of some of the medication-related aspects of the plot may not bear close scrutiny. But few viewers who are not health professionals are likely to be troubled. So these elements seem unlikely to affect public understanding of nursing much.

Marta’s care of Harlan goes well beyond giving him medications. She is perhaps his only real friend, a close confidante in his difficult dealings with his family. When we see her and Harlan alone, she does not defer to him and they are more like peers. He doesn’t seem like an easy patient, but she keeps him on track with a bantering, “tough love” approach. Harlan respects her. In one scene, we learn that she regularly beats him at the complex Japanese board game Go.

However, the rest of the Thrombeys see only a young first-generation Latina who is faithful and kind, but also peripheral and not worth much real consideration. On several occasions, a different family member confidently reports where Marta’s family originates. Each time, the Thrombey family member names a different nation south of the U.S. border. Even the two main police characters see Marta as of little interest in the case, one of “the help,” until Blanc forces them to pay attention to her.

Indeed, the film regularly calls attention to social disparities, and Marta is a key vehicle for that theme. It eventually emerges that her mother is undocumented, which becomes a major liability for Marta. The movie spends time at the modest home Marta shares with her mother and sister. The Thrombeys pay lip service to her, claiming that she is part of the family and that they will take care of her in the wake of Harlan’s death. But this is largely bogus. It becomes clear that their loyalty to her varies by whether they perceive her to be any trouble or a threat; when they do, then she is only an “anchor baby.” At one point, Marta becomes an uncomfortable exhibit in a heated discussion of immigration policy. One Thrombey who supports stronger immigration restrictions holds up the admirable, hard-working Marta’s family as an example of one that followed the rules and came to the U.S. legally—which the audience knows is not the case.

Marta does spend a good part of the film in states of anxiety, emotional distress, or outright panic. And of course at those points, she is not providing an image of a confident, expert nursing professional. But while navigating the many perils that surround her, she also makes key deductions and maneuvers, showing that she is able to do hard things and withstand pressure. She is a problem-solver and a key cohort of detective Blanc on the trail of finding what he calls “the truth.” At other times, she cleverly evades or even obstructs his investigation to protect herself, for instance by intentionally spoiling evidence in a way that seems unwitting.

There is a clear focus on Marta’s moral goodness, which could actually be problematic. The film, and Blanc in particular, presents her virtue as almost a super-power. Marta seems to navigate the world by making choices based mainly on a moral sense rather than calculation or self-interest. Apparently she wins the Go games with Harlan because she plays to create beautiful designs, rather than trying to beat him. She also seems to prevail over the morally compromised people who surround her by making moral choices. At one point she chooses to save a life, partly by performing CPR, even though it appears to be totally against her own interests. In a similar vein, it becomes clear that lying, which Marta does tactically at times, causes her to be physically ill, and she must vomit soon afterwards—that’s how virtuous she is! Of course, such an aversion to deception would seem to be more of a super-weakness in conventional terms. As for Blanc, as he muses out loud and at length about the state of the case, he repeatedly remarks upon Marta’s goodness. At one point, he asks her directly whether having a good heart is sufficient to be a good nurse. She stares at him, uncertain what to say, and she ultimately chooses to give no answer.

Of course, the answer is no. And normally suggesting otherwise could be a real problem, because it does tend to reinforce the unskilled angel stereotype. A filmgoer could see Marta’s evasion of some of the perils here as mainly the result of blind intuition or innate virtue. But there is little in the portrayal to suggest that she is unskilled or angelic. And there is much to suggest a tough, able core under her deferential demeanor, a person whose qualities are recognized by the most perceptive of those who surround her—her actual peers. So the character doesn’t really end up reinforcing the stereotype. Instead, she comes off as an uncannily adept first-generation survivor.

You can reach Rian Johnson, the writer, director and editor of Knives Out @rianjohnson and @KnivesOut. Please copy us @TruthAbtNursing so we can follow your thoughts. Thank you!