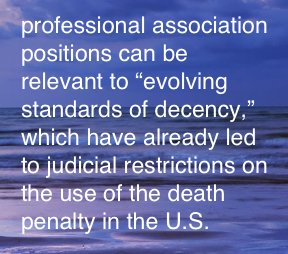 The Huffington Post reported that the American Nurses Association had decided to oppose not just nurse participation in capital punishment but the death penalty itself. And a shorter piece in The Hill said that the ANA strongly opposed an effort to “repeal and replace” Obamacare. Both articles presented nurses as serious health policy advocates.

March 8, 2017 – Recent press reports have highlighted strong advocacy by the American Nurses Association (ANA) on key health and policy issues. A February 23 piece in the Huffington Post was headlined Leading Nurses Association Takes Official Stance Against Death Penalty: The American Nurses Association has come out with a strong rebuke of capital punishment. In that one, Kim Bellware reported that the ANA had issued a position statement opposing the participation of nurses in capital punishment and going further to oppose the death penalty itself. The article explained that the ANA’s position derived in large part from research showing serious flaws in the application of the death penalty, including its disproportionate use on disadvantaged groups and the rate of post-conviction exonerations, as well as the consensus in the international nursing community that the death penalty is a violation of human rights. The piece relied in part on Liz Stokes, “the senior policy adviser for the ANA Center for Ethics and Human Rights.” And today, The Hill ran a shorter piece by Olivia Beavers reporting that the ANA had “denounced” a proposal by Republicans in the U.S. House of Representatives to “repeal and replace” the Affordable Care Act (Obamacare). The ANA’s statement reportedly said that the GOP’s proposal “threatens health care affordability, access, and delivery for individuals across the nation.” The statement also noted that neither experts like the Congressional Budget Office nor the public at large had had sufficient opportunities to evaluate the plan. Regardless of whether the positions that the ANA took are correct as matters of policy, these reports show the nursing group advocating forcefully on health policy. That is a critical way nurses can show society that they are serious health professionals who are deeply engaged with important health-related issues and who should be consulted about them. We thank all of those responsible for these articles.

The Huffington Post headline is “Leading Nurses Association Takes Official Stance Against Death Penalty.” The report says that the ANA has opposed the participation of nurses in capital punishment since 1983, but a new statement extends that position:

The article notes that other “medical professional organizations,” like the American Medical Association (AMA) and the American Pharmacists Association, have also opposed participation in executions on ethical grounds, but the ANA position is unusually strong. The piece extensively quotes Liz Stokes, the ANA’s “senior policy advisor.” Stokes says that the ANA’s board voted unanimously for the change and that most of the roughly 2,000 ANA members who commented were supportive. Stokes also explains that ANA personnel looking at the position were initially supportive of the death penalty, but they changed their minds after doing research:

Nurses on the subcommittee were surprised by the large body of evidence against the death penalty, Stokes said; they were particularly moved by the prevalence of racial and geographic disparities in how the death penalty is applied, how it is disproportionately used on people with intellectual disabilities and the fact that there have been more than 150 exonerations of death row inmates.

The article includes extensive commentary from death penalty experts about the potential effect of the ANA’s new position. Craig Trocino, director of the University of Miami Law’s Innocence Clinic, correctly cautions that policy positions like this, even from “large, storied organizations,” are really just persuasive (rather than binding) authority in court cases. But Robert Dunham, executive director of the nonprofit Death Penalty Information Center, adds that professional association positions can be relevant to “evolving standards of decency,” which have already led to judicial restrictions on the use of the death penalty in the U.S., for instance as applied to juveniles. Dunham finds the ANA’s position particularly notable in that it is based not only on ethics but also human rights. Evidently ANA noted that the U.S is (in the piece’s words) the “only first-world democracy that still practices capital punishment” and that the international nursing community views the death penalty as a violation of human rights. The item concludes with a strong comment from Stokes on this point: “Nurses are leaders and continue to be leaders in social justice. …We want people to look at the evidence and the science.”

This piece does a generally great job of explaining the ANA’s action and putting it in context. The article takes the ANA and its position seriously, comparing it to views of other professional groups like the AMA and consulting death penalty experts, whose comments support the idea that the nurses’ position could have some legal relevance. The piece’s reliance on Stokes is especially helpful, as her points powerfully illustrate the reasoning behind the ANA’s decision and what the group is trying to do:  be a public leader in advancing health and social justice. The piece commendably gives her title, although it would have been helpful to provide more detail about her credentials:  She is an experienced nurse and ethics attorney who would seem to be uniquely well-qualified in the relevant areas.

The Hill’s item is “Nurses join doctors, hospitals in ripping GOP health plan,” and in accord with that headline, it too presents the ANA as taking a policy position consistent with health care colleagues. Specifically, the headline refers to the American Medical Association (AMA) and the American Hospital Association. The piece reports that the ANA has “denounced” a plan to “repeal and replace” Obamacare, arguing in its letter that the plan

threatens health care affordability, access, and delivery for individuals across the nation. … Any legislation that would fundamentally alter healthcare delivery and deeply impact patients and providers deserves thoughtful, deliberate and transparent consideration. ANA strongly urges congress to allow opportunity for considered public and stakeholder feedback in the face of reforms that would have a far-reaching and personal impact on the lives of millions of people.

On the last point, the piece notes that the letter also highlights the fact that “non-partisan experts such as the Congressional Budget Office and the Government Accountability Office have not weighed in on the plan.” The report adds that ANA President Pamela Cipriano also tweeted against the plan, stating that it did not fulfill the promise of being better than Obamacare. The piece notes that the ANA has long supported Obamacare, opposing efforts to overturn it. The article says that in December 2016 the group “wrote a letter to Trump” urging him to keep the parts letting children stay on their parents’ health plans until age 26 and preventing denial of coverage for pre-existing conditions. The item also includes helpful background about the ANA itself, noting that it represents more than 3.6 million nurses and that it is “the largest U.S. organization of healthcare professionals with a record of being vocal about healthcare issues.”

This piece is fairly short, but it includes a number of helpful elements. It again aligns the ANA with its health care peers, including specific information about the group’s size. It presents the nursing group as a strong advocate on a key health policy issue, both in the Obamacare context and in the general statement that it has “a record of being vocal about healthcare issues.” And the report provides some specifics about the ANA’s policy position here, including its complaint that the GOP plan was being rushed through without adequate consideration. These points show the ANA, and nurses, to be attuned to relevant issues.