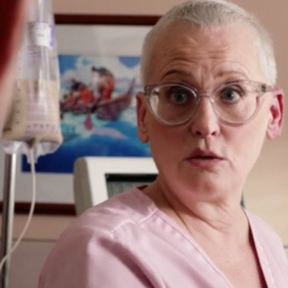 A 2017 episode of the CBS show’s reboot series is about Five-0’s efforts to protect a comatose witness from heavily armed killers. The witness’s nurse insists on joining the elite unit on a wild ride toward safety, showing health skills, resourcefulness, and courage under fire–actual fire.

March 2020 – As CBS’s Hawaii Five-0 reboot nears its series finale next month, let’s revisit an episode from the seventh season with a very good nursing portrayal. In episode 23, which aired in April 2017, the Five-0 team works to protect a comatose murder witness from trigger-happy drug dealers. It’s the usual stuff — except that throughout the episode, a strong, skilled nurse character keeps the witness alive! The witness, Makino, sustained head injuries seven years earlier, after the dealers threw him off a cliff to stop him from revealing information about a drug killing to Detective Danny Williams. Since then, Makino has been a comatose inpatient at an assisted living facility, where nurse Jenny Kitson has cared for him. Evidently, for Makino’s protection, only the Hawaii police know his true identity. But when local TV news report that the “John Doe” who has been in a coma for so long shows signs of regaining consciousness, Williams and his old police supervisor know Makino is at risk, and they set about trying to move him to safety. So begins a protective odyssey in which nurse Kitson displays not only a fierce commitment to her patient but also skill with health care technology, CPR, and patching bullet holes in breathing tubes. She even shares Five-0’s ability to emerging unscathed as the bad guys, armed with automatic weapons, fire hundreds of rounds at them! Equally miraculous, the episode avoids major nursing stereotypes. There is no suggestion that Kitson is handmaiden who reports to physicians, nor that she is a battle-axe, a naughty nurse, or even an angel. There is a twist: In an early scene at the assisted living facility, Williams barely manages to subdue an attractive young female contract killer who is posing as a nurse to give Makino a deadly injection. That did remind us of Elle Driver’s naughty-axe persona from the 2003 film Kill Bill Vol. I. But this Five-0 character does not display enough personality to convey much about nursing. She is just a hired assassin who dons plain scrubs as a way to get to Makino. So please join us in thanking episode writers Helen Shang and Zoe Robyn, as well as everyone else responsible for the episode (see below for contact info).

Just in case it helps

Early in the episode (“Wehe ’ana (Prelude)”), we see a local TV news report about a man who has lain in a coma for seven years at the Haleiwa Assisted Living Center, after being found with severe head injuries. No one knows who he is or what happened to him. There are brief interviews with staff who have bonded with “John,” specifically an administrator, a physician, and nurse Jenny Kitson, who says: “I read to him every week. Just in case it helps, you know.” But, the TV segment reports, “doctors” say recent brain changes suggest the patient may soon regain consciousness. This affects Danny Williams, we understand, because it was his last regular Hawaii Police Department case before joining Five-O seven years ago. A flashback to that time shows him arriving at a crime scene, which involves a cocaine dealer found murdered in a nice neighborhood. Williams questions a nervous passerby named Makino, who admits that he spends time in the area and is evasive about whether he saw anything related to the dead man. Williams gives Makino his card, and Makino actually calls him on an office phone later, but then hangs up before Williams picks up the phone. Soon Makino is found at the bottom of a cliff.

Back in the present day, Danny and his now-retired captain from the old days, Tanaka, realize that a conscious Makino presents a risk to the drug dealers who likely injured him seven years ago. Maybe the dealers saw the news report. So the two officers visit the still-comatose Makino, whose identity is known only to the police, even after all this time. Suddenly, the assisted living facility goes into lockdown because of some security breach. Williams is with Makino, making plans to move him to a safer location, when a seemingly meek “nurse” in solid green scrubs enters, saying she needs to do something for Makino. Williams does not see anything amiss until the “nurse” attacks him. After an extended fight in which she almost kills Williams, he manages to inject her with the syringe she had intended for Makino, killing her. Later, the Five-0 squad identifies her as a contract killer from the mainland.

Tanaka returns to the room with nurse Kitson, who wears solid pink scrubs. Understandably, given what just happened, Williams says hello by pointing his gun at her. Kitson is taken aback but manages: “My name is Jenny Kitson, I’m a nurse, I’ve worked here for 6 years.” She shows her ID, then moves toward Makino. “Excuse me, I’m going to check on my patient, please try not to shoot me.” Williams is apologetic. After the fallen assassin’s drug dealer friends call her cell phone, Williams asks Kitson to pretend to be the assassin to try to keep them from following her to the health facility. But it does not seem to work, and Williams wants to move Makino. Jenny: “This man is on a ventilator. I can’t move him, he might die.” Williams explains that he’ll be killed if they don’t move him. Later, we see Jenny preparing Makino to go, taking out his gastro-intestinal tube (it’s not clear why it couldn’t be just clamped and disconnected instead of removed). Williams asks if Makino will be OK during the move they are planning.

Kitson:  Yeah, he can go a couple hours without his saline and his feeding tube. The most important thing is the ventilator. But it’s hooked up to the battery now, which is charged enough to get us where we gotta go.

Williams reacts to her use of the word “we,” telling her that she’s not going with them.

Kitson:  John is my patient, who I’ve kept alive every day for the last 6 years. He’s my responsibility. I’m coming with him. … He is safer with me than with you two, unless you two went to nursing school in the time it took me to take out his G-tube.

Soon Williams, Tanaka, and Kitson are on the move out of assisted living facility. But the drug dealers are already there. Williams kills one near the elevator. The Five-0 group manages to pull away in an ambulance, amid automatic weapons fire. Williams drives desperately. Kitson reports that Makino is stable, his vitals are all right, but she is getting a little carsick. Makino’s monitor beeps. Kitson says that is his oxygen, and we see that she’s got to patch a hole the bullet made in the oxygen tubing. She asks Tanaka to go into one cabinet for the surgical tape, and she succeeds with this on-the-fly repair. Williams and Tanaka manage to disable both pursuing cars, but they run over treadles and have to stop, with the bad guys still in pursuit on foot.

Williams and company go to the first nearby house. A teenager opens the door, and they ask for the house. She seems too scared to object. Williams tells her to run to a friend’s house, which she does. Kitson suggests the teen will have nightmares; William says just a good story. As Williams focuses on trying to secure the house and guiding others in Five-0 to their location, Kitson reports that Makino’s ventilator is almost out of energy, so they will have to plug it into a house outlet. William tells her “good job.” Kitson observes that putting in a plug is no big deal. Williams says he didn’t mean that specifically, but that she did not have to come with them and put herself at risk. Kitson: “Yeah, I did.” Later, the drug dealers manage to cut the power to the house. That is a problem for Makino, as Kitson reports to Williams: “The battery’s dead, he’s got three minutes before he suffocates.” (No real nurse would take such a patient on a road trip without an ambu bag to maintain breathing manually, but probably few viewers will know that.) After some more gunfire, Kitson reports another threat to Makino: “He’s got no pulse, I’m starting CPR…. I got a pulse, he’s back.” And just as the dealers enter the house through the front door, Five-0 boss Steve McGarrett crashes his SUV through the front of the house, killing the bad guys, but no one else.

As the episode winds up, we see the still-comatose Makino in what appears to be a hospital, with Kitson seeming to take the lead in re-establishing care for him. When Williams visits later,  Kitson assures him that his timing is fine, noting wryly that Makino “never complains about visitors, so you’re good. Hit the call button if you want a Jell-O or something.” Williams: “Hey, you risked your life today for someone you didn’t know, that’s impressive.” Kitson: “Hey…that’s what we do, right?” And that is basically the last we see of Kitson.

This is an amazingly strong portrayal, for a police drama, of a nurse showing health care expertise, authority, and patient advocacy. Kitson argues forcefully for her patient, first in urging that he not be moved from the assisted living facility, then, when it becomes clear that staying would be riskier, in insisting that she accompany him, and finally, in emphasizing that she had to stay with him despite the danger. In the course of doing that, she reveals her expertise (the G-tube). She shows courage and adaptability under pressure (patching the breathing tube). She saves Makino’s life (the CPR in the house). She displays a sense of humor (“unless you two went to nursing school”; “never complains about visitors”). Also impressive is what the show avoids. It manages to steer clear of every major nursing stereotype. There is no hint that Kitson is acting at a physician’s direction, that she is timid, that she is angelic or maternal, that she is naughty or a battle-axe. Williams, who is a bit of a character himself, says nothing insensitive about nursing or nurses. Kitson is basically a quirky ally in the squad’s weekly confrontation with death.

Please join us in thanking Hawaii Five-0  for this helpful portrayal of nursing. Click here to send a message of thanks to writers Helen Shang and Zoe Robyn via their agents Jordan Lonner and Sean Barclay.