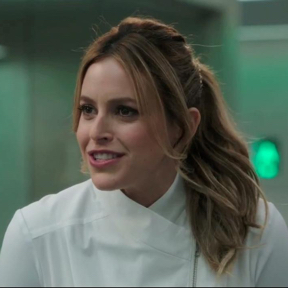 CBS’s Pure Genius saw the future of hospital care–and it was an exclusive boutique!

The futuristic hospital drama, which ended in 2017, offered a hopeful vision of care in which superstar physicians used the latest tech to save apparently doomed patients. But this fantasy portrayed nurses in the same old way–as peripheral handmaidens.

January 2017 – CBS’s hospital drama Pure Genius presented hospital care as a futuristic wonderland of high technology, beautiful spaces, and limitless resources. But that included very little nursing. Despite the show’s cutting-edge focus, it conformed to the conventional Hollywood model of care as driven by expert physicians, with nurses on hand occasionally to assist during codes or perform generic custodial tasks. So nurses would receive commands to help stabilize a flailing patient, escort a family member, or give some drug, perhaps with a mumble of agreement or a standard “yes, doctor.” The basic premise of the one-season show was that the young Silicon Valley billionaire James Bell had built his own state-of-the-art hospital to treat patients with rare diseases—like the one Bell himself had. He assembled a team of “best-and-brightest” physicians, led by rule-breaking surgeon Walter Wallace, and each week they hand-picked patients with unusual, unexplained, and/or desperate conditions. Then each patient got extraordinary amounts of attention from the physicians and Bell himself, who acted as possibly the most high-end concierge in history. In one subplot perhaps designed to make the show seem less elitist, the hospital had placed advanced monitoring bracelets in a nearby poor community to help monitor chronic conditions. In the first episode, one of these devices detected a paramedic having a heart attack just by sitting in his pocket, even though it was not even his device. That was nice, but also a bit creepy, given the growing concerns about tech-based surveillance and the nation’s history of non-consensual experimentation on disadvantaged groups. One minor nurse character named Nina did emerge in the last few episodes of the show with a limited substantive role. She helped Bell give one patient an unapproved experimental treatment, gave the patient good physical and psychosocial care, and served as a chaste romantic object for Bell himself. But overall the show’s vision of the future of health care seemed to involve interventionist superstars using high-tech gadgets to help a few people with exotic conditions, rather than better health care financing for all, public health measures, or nursing. Pure Genius was created by Jason Katims.

The show ran for 13 episodes ending this month, and apart from Nurse Nina’s limited appearances, nurses were little more than silent shadows. They were completely absent from most scenes. And physicians handled all the thinking, as they discussed how to overcome seemingly insurmountable care obstacles. Episode 4 featured the physician characters discussing care options and technologies with each other, patients, and the ubiquitous Bell. Nurses did appear in the occasional emergency scene; when one inpatient had seizures, nurses were suddenly present in her room. But mostly we only saw their forearms and the backs of their heads. In episode 5, when a patient coded, several nurses actually got a few minor lines. They called out the blood pressure and absorbed a physician command with a “Yes, doctor!” Of course, the physicians handled the ambu bagging and CPR. In episode 6, unnamed nurses had these lines: (1) “Doctors – you’re needed in room 32!”; and (2) “Right away!” Episode 8 featured what was apparently the largest-ever globally-paired kidney transplant endeavor. Only physicians were “in charge of” each donor–recipient pair. There were no apparent transplant coordinators (who in real life are often nurses) and no other nurses played significant roles. However, an apparent nurse did appear at one point standing near a patient in a wheelchair. Maybe she was “in charge of” pushing the wheelchair!

Nurse Nina Cooper appeared in the show’s final five episodes. In episode 9, we saw James Bell visit Lewis Keating, an older patient who had Gerstmann-Straussler-Scheinker Syndrome (GSS), the same rare, slowly fatal condition that James himself had. Keating’s wellbeing was critical to James, of course. In Keating’s room, Bell found an attractive young nurse who introduced herself as “Nina…Cooper.”

The show gets points for including her surname. The billionaire hospital boss James noted unnecessarily that he was “James…Bell.” James informed Nina that Keating was a VIP and asked her to take special care of him, which she promised to do. We didn’t see Nina do much in this episode. But James seemed intrigued by her, and we suspected that she might serve a role that minor nurse characters sometimes do, as a temporary romantic foil physicians spend time with when their relations with their true peers—other physicians—are on the rocks. James was not a physician, but his tech prowess and wealth made him a peer. And the physician character he really wanted was then with another physician.

Early in episode 10, James spotted Nina through the glass walls of one of the hospital rooms, caring for a young male patient who was bald and presumably had cancer. Nina left the room to see James, noting that his face looked tense; he admitted having a headache. Nina asked for James’s hand, saying that she would show him “a trick I picked up in Guangzhou.” She worked on his hand. Meanwhile, James noted that she had made the patient very happy, presumably based on how the patient looked at a quick glance. Nina reported that she was showing him some pictures of her with the Maori in New Zealand, and the patient wanted her to “paint his face like their tattoos.” James noted that Nina was well-traveled. Nina said she liked it almost as much as nursing! The physician in which James was romantically interested arrived. Nina introduced herself, told James to give her treatment on his hand a few minutes to work and to let her know if it did work, and then left. As far as we could tell, viewers did not learn whether it worked, but they did get a continuing sense of Nina as an object of some interest for James.

Episode 11 featured Nina’s most extensive involvement in care. We saw James arrive in Keating’s room with a chess set, with Nina also there. But Keating just stared at James, perhaps uncomprehending, seemingly unhappy. He also seemed to be developing some physical rigidity, a tremor, presumably because of his GSS. James was clearly shaken at this deterioration. Nina reassured him, in Keating’s presence: “I think Lewis maybe just needs to rest today.” But outside the patient’s room, James asked how long Keating had been like this.

Nina:  His symptoms progressed rapidly overnight. The SR3 is making it difficult for him to speak, he’s having difficulty eating and swallowing, soon he may need a nasal gastric feeding tube. He doesn’t have much longer, James.

This was a good, if brief, indication that nurses have technical health knowledge. Later, James arrived back at Keating’s room to find the patient gone. Using a tracking device, James eventually found Keating at apparently nearby Golden Gate Park—where Nina had taken him. Nina didn’t seem to get that there was any problem with doing that. She seemed to be trying to give Lewis a good death, but of course that was not what James wanted for him. Nina said she put in a “request” to take Keating out and should have waited, so she was sorry, but said also noted that Keating was at peace there. James said he could fire her for this. Will he, she asked? He was mulling it over, but it seemed unlikely. On this show, being a rule-breaker was good.

Nina:  Lewis told me about the new drug you’re developing for GSS, the PII 120-B.

James admitted that he was doing that, but explained that FDA approval would not come in time to help Keating. Nina found it funny that even he, the billionaire who started the hospital, could not get around “the system.” James responded that it was not so simple. Nina: “Isn’t it?” And they left it there. But near the end of the episode, viewers saw James and Nina apparently giving Keating the treatment for GSS, secretly, with Nina seeming to show some expertise in hooking up the IV.

Meanwhile, on the romantic side, the suspicion that James’s attraction to Nina was part of the temporary-physician-substitute model was not dispelled. James seemed to be connecting emotionally with his physician crush, even though it appeared she was still with the other physician. Toward the end of the episode, James did invite Nina to attend the prom of a young patient of the hospital. They danced and looked fairly intimate. James’s physician love interest, nearby, looked a little jealous, or at least curious. The Nina relationship did not seem like it would actually go anywhere, probably not even if the show had earned a second season. But at least it was fairly subdued. Nina was not desperate for or intimidated by James, unlike some nurse characters involved with physicians on such shows. With a good sense of herself, she seemed more amused by James than anything else.

Episode 12 found James nervous about Keating’s treatment, but Nina, ever the calm one, pointed out that it had only been 12 hours. And she wisely noted that James should not visit too often or people would start to wonder if something was going on. Later, James returned to see Nina doing some kind of therapy, moving Keating’s leg. Nina explained that she was stretching his muscles, since he had been bedridden for a couple weeks, so this would help his mobility when he started walking again. She also explained that he had a feeding tube because he was having trouble swallowing, but she tried to reassure James. James said Keating was lucky to have her. But Keating had a vacant look and things did not look good, until the end of the episode, when James rushed in to find Nina walking Lewis around, and whispered: “Oh my God…it worked.” Here again, some elements indicated that Nina had real health care skill.

In the finale, all the covert activity came to a head, but Nina’s role was so limited that she did not have any significant lines. Early on, we did see her walking Lewis around in a garden, showing that his apparent recovery continued. And later, James encountered Nina and Lewis working well with a physical therapist. But most of the episode focused on intrigue related to the unauthorized treatment that seemed to be happening above her level. Surgeon Walter discovered that James had given the unauthorized drug, and before long Walter’s visiting wife Juliana, who just happened to be the responsible FDA official (really), figured it out. Walter urged James to stop treatment, stressing that two days of recovery were not worth the risks. James understood but declined to stop treatment. The episode ended on an ambiguous note, which was presumably designed to create suspense for the second season, but which will now be the show’s ending.

On the whole, despite a few fleeting displays of nurse Nina’s technical and psychosocial skills, Pure Genius was another in a long line of hospital dramas that did not last long but still reinforced the public’s impression that nurses are physician subordinates who play no important role in modern health care.