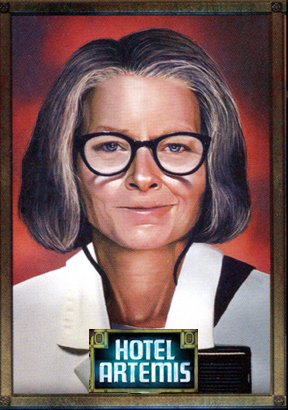 Written and directed by Drew Pearce

The Ink Factory; Mark Platt Productions; Point of No Return

The dystopian 2018 thriller imagines a secret, high-tech L.A. hospital for criminals, run by a tough and expert nurse, creatively named The Nurse. But not even Jodie Foster can save the character from the movie’s half-baked, formulaic execution.

The dystopian thriller Hotel Artemis has an intriguing central concept. And it has Jodie Foster. She plays The Nurse, who runs a secret high-tech trauma center for criminals in 2028 Los Angeles, a city that is being torn apart by riots set off by a water shortage. Healing and managing unruly lawbreakers, the Nurse displays real authority and a striking range of futuristic health care skills. But despite some good moments, the movie is so inconsistent and unpersuasive that it undermines whatever force the Nurse might otherwise have. She needs a movie transplant. (See the trailer.)

Actually, “high-tech” may not do justice to all the care technology, including nanobots, that the Nurse deploys to save her hospital’s “members.” They typically stagger in after getting shot in the course of some illegal activity. The hospital itself seems dark and seedy, with room themes based on famous vacation spots, like “Waikiki.” The patients are referred to by these themes, presumably to shield their identities. And the overall “hotel” set-up likewise serves to mask the facility’s technical capabilities. The Nurse seems to provide care that would typically be performed by nurses and physicians. She is assisted only by her “orderly” Everest, so named because he’s big like, you know, a mountain, and presents a formidable security presence. In some ways the Nurse resembles the lead character in the previous year’s Baby Driver. Both use special skills to assist criminals, especially bank robbers, but without directly taking part in the crime. Indeed, both seem to operate somewhat apart from their nasty cohorts, with rock and soul music blasting through their omnipresent earbuds.

The movie just takes for granted that the audience will accept this expertise and authority from a nurse. No one asks why the Nurse is not the Physician. No aggressive wounded felon, dissatisfied with how his care is going, suggests a physician would do better. The Nurse’s clinical background seems to consist of running a free clinic for the urban poor, but no one asks how that prepared her to wield ultra-advanced surgical equipment. Everest disagrees with some of her decisions, but his deference to the woman he addresses as “Nurse” is striking. And while the Nurse is pretty ruthless—she deals with criminals all day—she is clearly committed to patient care.

The Nurse also has a lot of problems. She is physically and socially awkward. She seems to have pretty severe agoraphobia. She doesn’t seem to have fully overcome the alcohol abuse that cost her nursing license, following the tragic death of her son many years earlier. We don’t see her make errors that are clearly attributable to being impaired, but still. And while we can see why she has been limited to treating criminals on the run, what with the lost license and all, it seems like she risks seriously violating the law by helping them in this way. But we don’t need her to be a superhero; these traits are consistent with a portrayal of a nuanced nurse character.

Not that she is one: her potential is wasted by ridiculous plot features and two-dimensional characterization. These people seem to relate to each other mostly through movie cliches. Of course, films like this are not meant to be taken too seriously. But good ones, like Baby Driver, do have a coherent and engrossing narrative power, sustained by credible dialogue, that is largely missing here. So for nursing, it’s a missed opportunity, as one of the more potentially formidable nurse characters in mainstream Hollywood film history shuffles oddly through a B movie.