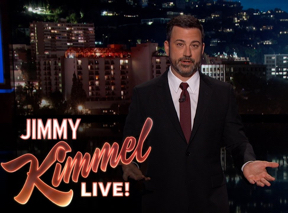 Jimmy Kimmel thanks nurses and others who saved his son

A May 2017 episode of ABC’s Jimmy Kimmel Live featured a long account of how the host’s newborn had survived his first days with a life-threatening heart condition. Some of Kimmel’s narrative reinforced a physician-genius vision in which nurses are just “kind and caring.” But he also carefully explained how two “excellent” nurses had first detected the condition, and he thanked many nurses by name.

May 1, 2017 – Tonight Jimmy Kimmel devoted the opening monologue of ABC’s Jimmy Kimmel Live to his son Billy, who was recently born with a life-threatening heart condition that required NICU care and an operation. In paying tribute to the hospital staff at Cedars-Sinai Medical Center and Children’s Hospital Los Angeles, Kimmel singled out Cedars-Sinai nurse Noonoosh Shakernia, who first detected his son’s problem. Kimmel said this “very attentive” nurse determined not only that Billy had a heart murmur but also that he was “a bit purple” in color. She alerted “another excellent nurse” named Ann DeMaio, in the NICU, who “checked [Billy] out” and then alerted other staff. Kimmel claimed he would have named his child Noonoosh if it was a girl! He also noted that the “great” DeMaio is “the head nurse in intensive care.” Kimmel later identified “nurse Joan Bacall, who was at [Billy’s] side the whole time,” as well as other health team members, including a respiratory therapist. Some elements of Kimmel’s account did reinforce the standard physician-centric narrative. He credited “genius” surgeon Vaughn Starnes, who performed the operation on his son at Children’s, as having saved thousands of lives, apparently all by himself. By contrast, Kimmel praised nurses Krista Callen and Carrie Dubbin at Children’s for being “unbelievably kind and caring,” which is nice, but also the kind of unskilled helping imagery that feeds the angel stereotype. Kimmel identified 10 other nurses only by their given names—in contrast to the seven physicians he identified, who all got the “Dr.” prefix and full names. There was one revealing anomaly:  after listing two Cedars-Sinai physicians, Kimmel mentioned “Barbara Gross who runs the Heart Institute,” with no “Dr.” prefix. Gross is actually a nurse, but here the credit for her work is more likely to go to physicians, as she is grouped with them and not identified as a nurse. Still, what struck us most overall was the unusual account of the skills of Shakernia and DeMaio, as well as Kimmel’s recognition that “it was a huge team effort.” So we thank him for those kind words.

Kimmel began the May 1 monologue by explaining that his son Billy, born about 10 days earlier, had seemed normal and healthy until about three hours after his birth.

Kimmel:  A very attentive nurse at Cedars-Sinai Hospital, her name is Noonoosh, was checking him out and heard a murmur in his heart, which is common with newborn babies, but she also noticed he was a bit purple, which is not common, so she asked me to come with her. And my wife and I assumed it would be nothing, our daughter had a heart murmur too, and we didn’t notice that he wasn’t the color he was supposed to be. So I accompanied Billy and the nurse, went down the hall to another part of the hospital, the neonatal ICU, where another excellent nurse named Ann checked him out and called the doctor in. And now all of the sudden it felt serious, and the room started to fill up, more doctors and nurses and equipment started coming in. And they determined he wasn’t getting enough oxygen into his blood, which, as far as I understood at the time was most likely one of two things, either his heart or his lungs. And you hope it’s the lungs, because sometimes they have fluid in them after delivery and it’s potentially a minor thing. But they did an X-ray and his lungs were fine, which meant his heart wasn’t. So now more doctors and nurses and equipment come in, and it’s a terrifying thing, you know my wife is back in the recovery room, she has no idea what’s going on, and I’m standing in the middle of a lot of very worried-looking people, kind of like right now, who are trying to find out what the problem is. And it’s Friday night, so they call a pediatric cardiologist, Dr. Evan Zahn, who when they called him was picking his mother up from the airport, luckily her plane was not delayed because he got to the hospital very quickly. They did an echocardiogram, which is a sonogram of the heart, and found that Billy was born with a heart disease, something called tetrology of the low with pulmonary etrusia. It’s hard to explain, basically the pulmonary valve was completely blocked and he has a hole in the wall between the left and right sides of his heart. And then they brought my wife in, they wheeled her in, and Dr. Zahn told her what was going on, what our options were, and we decided to take him to Children’s Hospital, where there’s a world-renowned cardiac surgeon who is by all accounts a genius, his name is Dr. Vaughn Starnes. So we put the baby in an ambulance to Children’s Hospital Los Angeles. And on Monday morning, Dr. Starnes opened his chest and fixed one of the two defects in his heart, he went in there with a scalpel and did some kind of magic that I couldn’t even begin to explain. He opened the valve and the operation was a success; it was the longest three hours of my life. They didn’t do everything, he’ll have to have another open-heart surgery in 3-6 months to close those holes. But they want to wait until he’s bigger, and then they’ll have a third hopefully non-invasive procedure, sometime maybe in his early teens to replace the valve he has now.

After a few more details, Kimmel had a list of people to thank.

Kimmel:  These are just some of the people who played a part in this, it was an enormous team effort, it really was. At Cedars-Sinai Hospital, first of all I want to thank Noonoosh Shakernia, the nurse who was the first to notice the problem. If it was a girl, we would have named her Noonoosh, we really would have. And the other nurses at Cedars, Desire, Laurie, Ashley, Teresa, Susan, Alexis, the head nurse in intensive care Ann DeMaio, who’s great, nurse Joan Bacall who was at his side the whole time, Dr. Evan Zahn, and also his mother who probably didn’t get her luggage because he picked her up at the airport, Dr. Scott Cohen, Dr. Stacy Rosenbaum, Dr. Tim Kazares, all for being so great. And the truly awe-inspiring team at Childrens Hospital Los Angeles, led by Dr. Vaughn Starnes, who saved so many lives, this man has saved thousands of lives and turned so much sorrow into happiness, I’ll never be able to thank him for, uh…so I won’t even try. And all the great doctors at CHLA, Dr. Sylvie del Castillo, Dr. Aaron Abarbanelle, Barbara Gross who runs the Heart Institute. And our unbelievably kind and caring nurses especially Krista Callen and Carrie Dubbin, but they were all so excellent, Elise, Janet, Josie, Rhea. Thanks to Donald Seback, our repiratory therapist who kept Billy breathing the whole time. … I want to thank my work family and my actual family, starting with my cousin Dr. Denise Hayes, who happens to be a pediatric cardiologist in New York, there is one smart person in our family. And she counseled us, she explained everything to everyone in our family over and over again so I didn’t have to, thank you Denise.

Kimmel spent the last couple minutes objecting to Donald Trump’s proposed cuts to the National Institutes of Health, which he explained would have far-reaching effects on overall U.S. health, including that of children. Kimmel went on to describe the issue of health funding as one of basic human decency, noting that without the recent expansion of health insurance, those with conditions like his son’s could have been denied coverage, as it would be considered a pre-existing condition. He closed with a plea to make sure that kind of coverage is maintained.

Several elements of Kimmel’s monologue are helpful to nursing. His description of the “very attentive” and “excellent” Noonoosh Shakernia, with specifics about her work in detecting the heart condition, is unusual. Being “very attentive” is actually a critical part of nurses’ life-saving practice—patient surveillance and intervention—although the average television viewer rarely sees that. Likewise, the crediting of “another excellent” nurse, the “great” Ann DeMaio, is very helpful, and so is the statement that she is the “head nurse in the ICU.” Other nurse recognition is mixed. Nurses Krista Callen and Carrie Dubbin are singled out as notable in the “unbelievably kind and caring” category. Unfortunately, those worthy traits do not require any education or obvious skill. And that praise will reinforce the sense that nurses are unskilled angels, in contrast to the expert physicians. Kimmel also mentions Cedars-Sinai nurse Joan Bacall, “who was at [Billy’s] side the whole time,” and Children’s nurse Barbara Gross, “who runs the Heart Institute.” But anyone could have been at Billy’s side, and few people will realize Gross is a nurse, since Kimmel does not say she is. Many may assume she is a physician, since she is identified after two of them. As for the lists of nurses without surnames, that method of thanks may be gratifying to the individual nurses, but it does not make them identifiable to anyone else. Lots of people have those first names. It also suggests that they are unskilled assistants, maybe kind and caring ones, but assistants all the same. Serious professionals have surnames.

We realize the nurse identification issues are not necessarily Kimmel’s fault. Many nurses are reluctant to use their last names, whether for fear of getting credit (which might seem too uppity) or fear of getting blame (which might happen if a problem developed later). And hospitals and other facilities rarely publicize nurses or their work, except as a way to attract other nurses to join their staffs. It took us a while to find the correct spelling of Noonoosh Shakernia’s name, in large part because Cedars-Sinai, like virtually every other hospital, does not post the names of most of its nurses—in contrast to the extensive material we find regarding their physicians. A search on the Cedars-Sinai website for physician Evan Zahn returned 58 results. For Ann DeMaio, a neonatal nurse practitioner who has been at the hospital for 18 years? Zero hits.

Then there is Kimmel’s recognition of the physicians. We have no problem with physicians being credited for their good work. But note how Kimmel focuses on their expertise and intellect; they are knowledge and skill workers. Starnes in particular is a “genius” who “did some kind of magic that [Kimmel] couldn’t even begin to explain” and who has “saved thousands of lives and turned so much sorrow into happiness.” Kimmel also says Starnes “led” the team at Cedars-Sinai, but of course he did not “lead” the nurses, who have their own authority and scope of practice. Physicians Zahn and Hayes are also singled out for their knowledge, and for having explained health issues to Kimmel’s family. Not even the most lauded nurses are described in those ways.

Still, many media figures would have just thanked the physicians by name and the nurses as a group, if at all. So we thank Kimmel for his specific descriptions of the work and professional status of nurses Shakernia and DeMaio.