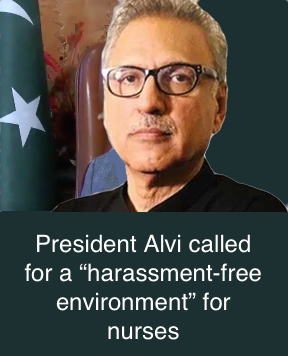 Pakistan’s Geo on 2019 as the year of nursing

The Pakistan website Geo reports that the nation’s President declared 2019 to be “the year of nursing.” He spoke at the Islamabad launch of the Nursing Now campaign, a project of the World Health Organization and the International Council of nurses that aims to advance nursing across the globe.

January 8, 2019 – Today the Pakistan news site Geo reported that the nation’s President, Dr. Arik Alvi, had declared 2019 the “year of nursing” in Pakistan. He did so at an Islamabad ceremony to mark both the first Pakistan Nursing and Midwifery summit and the launch of the nation’s Nursing Now campaign. That campaign is part of the global initiative of the World Health Organization (WHO) and the International Council of nurses (ICN) to advance the nursing profession. President Alvi introduced what sound like promising reforms. These include the replacement of nursing diploma programs with degree programs, and a rapid increase in the number of nurses trained, including the establishment of a national nursing university to train 25,000 people yearly. He also called for a “harassment-free environment” for nurses and drew links between nursing and economic development. Not all the reported comments were completely helpful. The President reportedly said nursing is “regarded as the backbone of the healthcare sector” and stressed the need for proper education for “the women associated with the nursing and midwifery services, besides imparting them with leadership roles.” The leadership part is great. But the “backbone” image evokes the low-skilled angel stereotype, and the focus on women, while understandable, does little to encourage men to enter the profession. The report closed by noting that the WHO directer Tedros Adhanom Ghebreyesus and a representative of Nursing Now had “said the campaign running in 70 countries across the globe would focus on … enhancing the role and voice of nurses and midwives in health policy-making, encouraging investment in the nursing workforce, and recruiting more nurses into leadership roles with [a] focus on research, proper training and the best nursing practices.” The unsigned piece would have benefited from more input from ICN. But on balance it is helpful, and we thank those responsible.

See the article “President Alvi declares 2019 the year of nursing,” published on the Geo site on January 8, 2019.