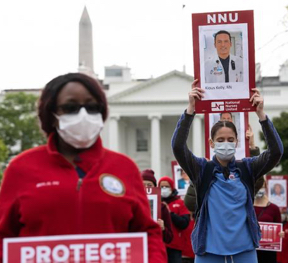 An April 2020 CBS News piece reported that National Nurses United had held a protest in front of the White House about the lack of personal protective equipment (PPE). The union argues that the CDC has weakened its standards for PPE, that OSHA has likewise failed to act, and that Congress and the White House have not mandated the production of enough PPE or testing supplies.

April 21, 2020 – Today CBS News had a short report about a protest held by the union National Nurses United (NNU) in front of the White House over the lack of adequate PPE for health workers. The piece by Audrey McNamara and Brandi Kellam says the nurses carried large photos and read the names of health workers who have died after treating Covid-19 patients. The report has strong quotes from Britta Breenan, a critical care nurse at Washington Hospital Center:

We are not heroes. We’re human beings and we are susceptible just like everyone else is. And if we are dying then we can’t take care of our patients.

Breenan says nurses at her hospital have died, and “they are not dignified deaths.” Quotes from NNU’s lead legislative advocate Amirah Sequeira echo those points. The union says that the Centers for Disease Control has actually weakened its recommended protections, presumably referring to the notorious suggestion that cloth masks are adequate. NNU also notes that the Occupational Safety and Health Administration has failed to set emergency safety standards for Covid-19 care, although NNU filed a petition seeking that seven weeks earlier. The union says that President Trump and Congress have likewise failed to require such standards. And it faults the Administration for not invoking the Defense Production Act to greatly increase manufacturing of “respirators, face shields, coveralls, gowns, gloves, testing equipment and supplies.” The piece says that Trump did recently mandate more production of swabs for testing, and that the White House is reportedly helping others fly PPE from China. But NNU finds these efforts inadequate, as Sequeira argues:

What’s happening in hospitals today is because nurses and other healthcare workers don’t have PPE that’s needed.

This report doesn’t tell people exactly what nurses do for patients. But it does show nurses to be informed, assertive advocates for themselves and the public—not low-skilled angels. And Breenan’s comment about nurses being vulnerable humans, not heroes, also counters the angel narrative, under which nurses are expected to absorb endless abuse because they are virtuous spiritual beings. We thank those responsible for this report.

See the article “Nurses protest unsafe conditions in front of White House,” by Audrey McNamara and Brandi Kellam, published on April 21, 2020 on the CBS News site.