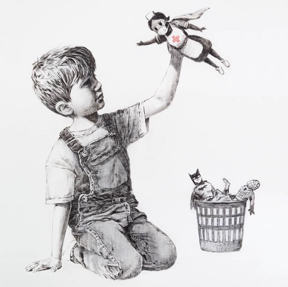 A new Banksy work hangs in a hospital in southern England. It pays tribute to NHS staff by showing a boy playing with a female nurse action figure—she is flying and trailing a cape—while Batman and Spiderman dolls rest in a nearby trash can. To some extent the work falls within the now-ubiquitous health-care-hero narrative. But its gender twists and the real value its donation offers to the NHS set it apart.

May 12, 2020 – Just in time for Nurse’s Day, the secretive U.K. street artist Banksy has donated a new work called “Game Changer” to Southampton General Hospital. It now graces the wall of a well traveled hallway there, as if it were a piece by some conventional artist. The black-and-white drawing shows a boy, kneeling in overalls, playing with his raised arm holding an action figure with a cape. But this figure is a female National Health Service nurse. She has one arm stretched forward (as one does while flying) and she wears a cap, face mask, and old-timey dress with a red cross, the only color in the piece. Meanwhile, Batman and Spiderman dolls lie in a small trash can below. According to coverage on Al-Jazeera and elsewhere, the work appeared in early May with a note from the artist thanking the hospital for everything it was doing and expressing the hope that it might lift spirits. Press reports suggest it has done so, and presumably it will continue to do so when it is auctioned off later in the year to raise funds for the NHS. Like many Banksy pieces, this one has reversals and double-meanings. The boy is playing a game. But Covid-19 has “changed the game” in many ways. One is that at least some of the public seems to have discovered that nurses, like superheroes, save lives. Gender is working in different ways here. Most serious Covid cases are males, like this child, and most nurses are still female. Males should revere the real women who have long been saving their lives at least as much as they do male fantasy figures from the Marvel and DC universes. Of course, showing a female nurse in a traditional uniform does reinforce that gender role. And the overall Covid-hero narrative has gone so far by now that many nurses have rightly objected that it rings hollow when they lack the personal protective equipment (PPE) they need to provide safe care. Indeed, under the traditional angel-nurse stereotype, nurses are seen as virtuous comfort workers who can be expected to endure any level of suffering (and even death) because that is their vocation. But Banksy’s works are often part of larger social and media narratives. Here is a story about the surprise gift of a touching work by one of the world’s best-known—and most iconoclastic—artists to a local hospital, where it graces the wall of well-traveled hallway. Later it will be auctioned off for a presumably large sum; proceeds could be used to buy nurses PPE. So the artist has modeled an act of giving something of value to front-line workers, which stands in some contrast to simply associating yourself with them in a TV ad and reaping the public relations benefits, as major corporations are now doing. It’s true that Banksy himself will gain public goodwill from this, probably even from some who have not been fans of his past challenges to political and economic power structures. But he could easily have made a work calling attention to the Covid-related failures of those in power. Perhaps he decided that, even if only for a moment, the game has changed.

1 thought on “Nurses: Into the Banksy-verse”