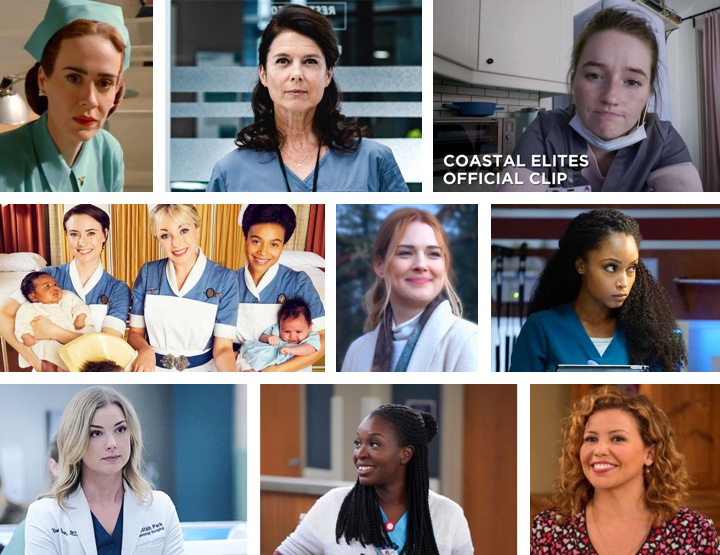 Nursing will be back to prime time. The big news is Netflix’s release of Ratched, but the streaming giant will also offer more of the actually-pretty-good portrayal of nursing on romantic drama Virgin River. And it seems there will always be the BBC’s Call the Midwife, with its strong portrayals of nursing. But on the new show Transplant, about a trauma physician who is a refugee, nurses are peripheral helpers. And otherwise, the landscape will be dominated by other physician-centric dramas, ranging from Chicago Med, which has several skilled nurses, to Grey’s Anatomy, which never has.

September 2020 – Nursing has gotten more attention from the news media during the Covid-19 era so far, but that hasn’t led to a much different fall TV season for the profession – or maybe we should say fall-ish TV season, in light of the many delays and changes the pandemic has caused. We are not sure yet when many shows will return, but here are some highlights:

One Day at a Time

Ryan Murphy’s “origin story” for the original nurse battle-axe is here. Trailers suggest the show will offer reasons Ratched became a monster, and maybe a few stray efforts to pay respect to nursing (like her delivery of the well-known line quoted in the title to this piece). The character seems sharp and formidable. But if her main mode is as an oddly menacing quipster, and there are no counter-examples, that may not diminish the stereotyping much. Charismatic villains are fun, but is that what nursing needs?

This new Canadian drama is about a refugee from Syria who is also a gifted trauma physician, but he must start over as a resident in a Toronto emergency department (ED). The many physician characters are “supported,” as the NBC site says, by one veteran, no-nonsense head nurse. But the physicians dominate, and they have the real skills and authority.

This TV movie presents five characters monologuing their pain and anger from their computers during the Covid era. Kaitlyn Dever has the role of a Wyoming nurse who went to New York to care for Covid patients at the height of the pandemic there. Dever delivers a short but moving account of the work, in particular for one lively patient.

The best current prime time show for nursing will return for a tenth season, with roughly 10 nurse-midwife characters providing holistic care to a working class community in 1960s London. The show does occasionally over-credit physicians, but the main impression is of nursing authority and life-saving skill. See our webpage featuring analyses of the show over previous seasons, or see the show’s website, where you can find episodes.

Back for a second season, this rural drama is mainly about romance in the shadow of past traumas. But the lead character is a nurse practitioner (NP) who regularly shows advanced skills, managing issues including post-partum depression, emergency care, and her physician colleague’s regressive views of nursing.

Although this Dick Wolf drama is mainly about a half dozen emergency physicians, and they direct most of the care we see, it also has three major nurse characters (!):  two competent ED nurse characters with real skills and a strong hospital executive who is a nurse. These nurses regularly play key roles in care. For more information see our page on Chicago Med or the NBC website.

This hospital drama will return for a fourth season mostly about brilliant, renegade physicians. But it also has arguably the strongest nurse character on U.S. television, nurse practitioner Nic Nevin, who regularly saves lives through her skill and advocacy. Not so great for staff nurses, however; they tend to be assistants, at best. For more information see our page on The Resident, or the Fox website.

This sitcom, returning for a second season, does not have much nursing. But main character Abishola is a skilled, no-nonsense Detroit nurse, originally from Nigeria, who advocates forcefully for her patients. Points deducted for so persistently pushing her son to be a physician, rather than a nurse. For more information, see the Bob Hearts Abishola page on the CBS website.

This sitcom reboot’s lead character Penelope is an NP who has at times shown some real health skills. But the show’s fourth season, interrupted by the pandemic on Pop TV and reportedly restarting here on broadcast affiliate CBS, had very little health care—and one bad naughty nurse joke.

Back for a 17th season, this hospital show will again present surgeons as doing everything that matters, while nurses are clueless handmaidens. Last season had about one good minute, as a nurse character did present some expert information to an anxious patient. For more information see our Grey’s Anatomy page with analyses over the years or the show’s website on ABC.

This drama about a brilliant young surgeon with autism will be back for a fourth season. Physicians generally do everything on this show, although last season a few nurses did appear, notably to serve as low-skilled appendages to a young surgeon during a crisis. For more information see our page on The Good Doctor or the show’s website on ABC.

Focusing on the brilliant medical director at a public hospital in New York, the show will be back for a third season. Physician characters dominate, although minor nurse character Casey does occasionally appear to show some skill in the ED. For more information on New Amsterdam, see the show’s website.

The physician-centric narrative of much U.S. prime time television is exemplified by shows like Grey’s Anatomy, The Good Doctor, and New Amsterdam, shows on which nurses tend to be handmaidens when they appear at all. And sadly, that narrative model is generally followed in the many shows that only occasionally include health care plotlines. In fairness, some shows, like Chicago Med and The Resident, do at least offer examples of nursing skill, advocacy, and even autonomy. But only a few—notably the amazing Call the Midwife and to some extent the new Virgin River—can be expected to offer a consistently good portrayal of nursing.

Please join us in encouraging better portrayals of nursing!

With all these shows, we need your help! Please first sign all our petitions, speak to show creators, and consult our Take Action page for more ideas. Since we cannot monitor the world’s media by ourselves, please watch one or more of the shows with a nursing element and let us know if you see a good or bad portrayal at info@truthaboutnursing.org. If we all work on a piece of the puzzle, we can build a society that respects nursing in line with its true worth, helping to strengthen the profession so nurses can deliver better patient care.

And please support us financially so we can continue to pursue our work. We need your support to host our website, access the media we monitor, and run our office. Please click here to make a generous donation today to help us continue our work? Thank you!

See all our Fall TV previews over the years–since 2003

2 thoughts on ““Save one life, you’re a hero. Save a hundred lives, well then you’re a nurse.””