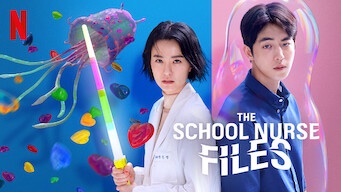 As part of Netflix’s apparent effort to present nurse characters who are as different from each other as possible, school nurse Anh Eun-young takes her surreal place alongside battle-axe Mildred Ratched and Virgin River’s skilled NP Mel Monroe.

September 25, 2020 – School Nurse Files is a six-part Netflix comic-fantasy series, based on a successful Korean novel, about young high school nurse Anh Eun-young. She wears a white coat and we see her confidently demonstrating CPR to a class. But the vast majority of her time is spent battling supernatural forces, armed with a unique ability to see “jellies” (spirits and life forces) and an array of brightly colored plastic weapons. Anh appears to be gifted and committed to her work, although almost no one else is even aware of what she is doing. She also spends a lot of time in a state of comically odd confusion and frustration, as she and her cohort, teacher Hong In-pyo, work to contain the mysterious powers that seem to threaten the school and its quirky students—or at least our sense of reality, as the show consistently includes conduct and images that are not clearly explained. The series also features some real elements of a modern high school, including tests, classes, romance, and shenanigans, and the magical threats could be seen as symbols of the onrushing stresses of impending adulthood. In any case, based on the first two episodes, the show may provide a limited benefit for nursing. Here is an autonomous, competent school nurse who strives heroically to protect her students from dangerous forces—such as an enormous monster that wants to eat them—and who does not embody any major stereotype. On a more subtle level, the fact that virtually no one seems to be aware of her true talents or that she is saving lives certainly does reflect the real situation of most nurses. But awareness of that theme may be as limited as appreciation for Anh’s work. And the fact that her practice mainly involves supernatural challenges that are often less than fully comprehensible, combined with the character’s own kooky demeanor, will likely limit the positive effect. In fact, the simplest interpretation of the show may be captured in the lyrics of its end-credits music:

See more about the School Nurse Files on the Netflix site.