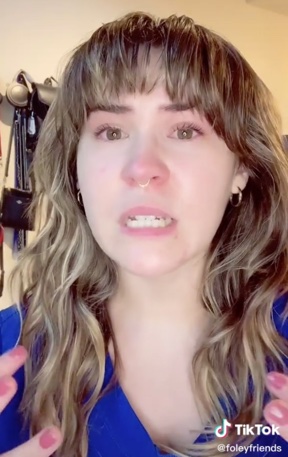 In October 2020 CNN reported on a widely-shared TikTok video in which nurse Cristina Hops expressed outrage at a tweet by Donald Trump urging people not to “be afraid of Covid.” Hops argued that the tweet undermined the efforts of health workers to get the public to take the deadly disease seriously. That is strong patient advocacy.

October 8, 2020 – Today CNN ran a short report by Kelsie Smith about a TikTok video in which Seattle nurse Cristina Hops strongly objected to a recent statement by Donald Trump that appeared to downplay the gravity of Covid-19. On October 5, Trump tweeted “don’t be afraid of Covid. Don’t let it dominate your life.” Fighting through tears on her video, Hops said:  “I have seen hundreds of people suffocating to death and for him to say do not be afraid of Covid is astounding. How dare he undermine all of the work that we have done as nurses and health care providers?” Hops explained to CNN that people would interpret the tweet as a signal that they could relax and not worry about the disease (a view of the tweet that is widely held among public health experts). Hops herself had spent five weeks caring for Covid patients in Miami over the summer, and she said that her hospital had been “completely overrun” with cases. She said she hoped her video would encourage people to take precautions. CNN reported that the video had more than 300,000 views and had been widely shared. This is an example of a direct care nurse advocating courageously against a statement from a very powerful public official that she reasonably viewed as threatening public health. And Hops did so in a way that attracted significant attention in both social and traditional media. We thank those responsible.

See the article by Kelsie Smith, “Nurse who has seen ‘hundreds of people suffocating to death’ moved to tears after Trump downplayed coronavirus,” posted on CNN’s website on October 8, 2020.

2 thoughts on “Hundreds of people suffocating to death”