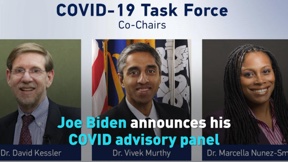 November 12, 2020 — Thank you to the many hundreds of people who have joined our letter-writing campaign and urged President-elect Joe Biden and Vice-President-elect Kamala Harris to add nurses to their Covid-19 task force. One of the current advisory panel members got in touch with us yesterday to let us know our concerns have been heard and they are eager to put forward our suggestions for the best nurse candidates for the panel. Please send us your ideas as to who you think should go on the board and, if possible, a link to their biographies so we can have information as to why this person is qualified. We are hoping to send in the names soon. Please submit your nominations to info@truthaboutnursing.org by November 15, 2020. Thank you!

2 thoughts on “Which nurses would be the best fit for the Biden-Harris Covid-19 advisory panel?”