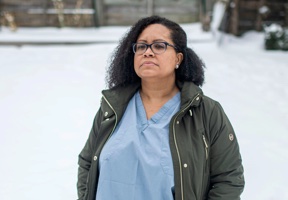 In late February 2021, two nurse-related opinion pieces appeared in the Times almost at the same time. A powerful 15-minute video by Alexander Stockton and Lucy King took viewers inside a Covid ICU, where nurses provide the “vast majority of care.” And a strong op-ed by Theresa Brown described the great stress nurses face in caring for Covid patients, especially when that involves understaffing, which threatens patients and nurses themselves.

February 25, 2021 – This week there has been a mini-boom of helpful opinion items about nursing in the Covid era on the main New York Times web page. Yesterday, the paper posted a 15-minute video by Alexander Stockton and Lucy King titled “Death, Through a Nurse’s Eyes.” That may not sound promising. But in fact the video is a powerful look at the central role nurses play in caring for critically ill Covid patients, with narration apparently by Stockton and video drawn from cameras worn by two nurses in a Phoenix intensive care unit (ICU). It’s true that even in that high-tech setting, the video does not convey too much of the advanced skills such nurses use, focusing instead on their psychosocial care and the severe stress of the work, particularly the frequent experience of dying patients. A sentence in the Times’s short summary text captures all this: “Nurses brush patients’ teeth, change their catheters and hold their hands in their final moments.” But the video also makes very clear, through its imagery and statements, that (as Stockton notes) “you might expect the doctors to be running the show, but it is really the nurses who are providing the vast majority of the care.” An ICU physician underlines this point, noting that he might spend 10 minutes with a patient while a nurse would spend hours, and that without the nurses, there would not be much point in opening the unit at all. Clearly, the reference to what “you might expect” expresses the common social misconception, which the media often reinforces, that physicians do “run the show.”

And today, an op-ed by nurse author Theresa Brown headlined “Covid-19 Is ‘Probably Going to End My Career’” appeared right next to the video. Brown’s piece discusses the stresses of nursing in the Covid era, particularly the understaffing which has exacerbated nursing burnout. She explains how short-staffing harms patients and cites a recent study published in JAMA that showed mortality rates were higher at overloaded Covid ICUs at Veterans Affairs hospitals. Brown also focuses on the personal experience of several nurses from around the nation. One ICU nurse tells Brown she has had it and plans to become a primary care nurse practitioner. Another nurse reports that she has had Covid ICU patient loads as high as four patients, when anything more than two is generally unsafe, and that patients had died because of nurse understaffing. We know for a fact that this level of understaffing does occur. Other nurses talk about the “moral injury” they are experiencing not only from the frequent exposure to death, but also the sense that their society is not providing adequate support, from lack of personal protective equipment to a failure to follow social distancing guidelines. Brown also notes that hospitals have traditionally seen nurses as costs to be trimmed rather than as revenue generators like physicians. Of course, this reflects a broader disregard for nurses’ value, despite recent tributes to them as “heroes.” Brown closes by advocating for safe-staffing legislation, more resources for nursing education, improvements in the work environment like addressing racism and bullying within nursing, and support for new pathways into the profession. On that last point, she quotes the union executive Jane Hopkins as asking, “How can a housekeeper become a nurse?” We are always ambivalent about that type of focus, which can recruit able candidates but can also suggest that nursing does not require advanced education and skill. In any case, making it easier to become a nurse is unlikely to resolve most of the underlying problems that Brown herself highlights. Indeed, in the end she says that the focus on the bottom line that she has experienced in health care settings means she herself will probably never return to clinical practice. Brown’s piece shows that despite nurses’ central role in health care, they are not yet running enough of the show.