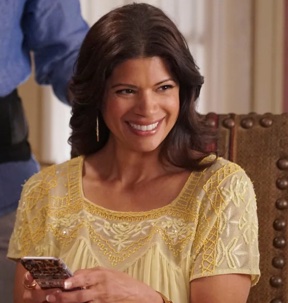 On the final season of The CW’s popular telenovela Jane the Virgin, the main character’s mother Xiomara finally decided on a career path that held promise:  nursing. In general, the plotline tracing Xo’s decision-making and nursing school application process told viewers that nursing is a challenging science profession.

December 30, 2021 – In the final season of the CW telenovela Jane the Virgin, ending in 2019, the mother of the central character decided to attend nursing school. Jane’s mother Xiomara (“Xo”) had long struggled with her career, among other things, and this choice seemed to bring her a renewed sense of purpose. Overall the show handled it well. Xo’s family was overjoyed at her decision (no one suggested medical school), and the show generally presented nursing as a worthwhile and challenging endeavor. Indeed, Xo was initially intimidated by the difficult science work that she was contemplating. And in giving a sense of the nursing school curriculum, the show offered terms that would likely impress many viewers (“cell physiology, histology, integumentary”). It’s true that a few elements may have suggested that nursing is open to those who are not great at academic work, when in reality nursing school admission is very selective. In any case, despite some doubts, Xo persevered, with the encouragement of her husband and her mother, who had practiced nursing herself long ago. And by the time Xo was admitted, she had grown confident enough with the relevant concepts to be explaining and even detecting health issues facing her family members. We thank show creator Jennie Snyder Urman and all those responsible for the plotline. At the same time, we see that Urman is an executive producer on the new CBS show Good Sam, which debuts next week, on January 5, 2022. Unfortunately, that show about a heart surgeon looks likely to follow the standard Hollywood hospital show model, in which physicians do everything that matters and nurses are peripheral subordinates. Please encourage Urman to remember the critical role that nurses actually play in health care.

So much science stuff

Jane the Virgin was about what happened after a young Miami woman, visiting an outpatient health office for a routine exam, was accidentally artificially inseminated with the sperm of a hunky hotel owner she barely knew. One long-running element in the show was the struggle of Jane’s mother Xiomara to find the right career path amidst various personal and professional setbacks. Xo was a talented singer and dancer, and she had dreamed of a career in those fields, but years passed and it had not really worked out as she wished. At last, toward the end of the final season of the show, Xo came up with a new idea.

In season 5 episode 13, Xo told her mother Alba, her husband Rogelio, and Jane that she had decided to pursue nursing school. They were all surprised but overjoyed, maybe partly because Xo had spent much of the show searching for a career direction. But they also seemed genuinely thrilled about nursing itself. The show had indicated more than once that Alba was herself a nurse, although it was not clear how much she had practiced since emigrating from Venezuela decades ago; recently, she had been working in a hotel gift shop. Xo herself had unfortunate recent experience with the health care system, having undergone treatment for breast cancer. Exposure to the real work of nurses can be a key attractor for second career nurses, although the show did not really make that link. Jane, the academic over-achiever, offered to help her mother with the nursing school application. But Xo wanted to figure it out on her own.

So Xo did some research online, and we saw her locate a syllabus for the “School of Nursing” at “Bannerton University” (which does not seem to exist in the real world). One “Course Description” said: “This course will focus on cell physiology, histology, integumentary.” Xo had to look up “histology,” and found a definition saying it was a branch of biology that studies tissues using the electron microscope. So then she had to look up “electron,” which was defined as “a stable subatomic particle with a charge of negative electricity.” So she had to look up “subatomic,” and by then she was looking pretty forlorn. Soon, Xo reversed herself, telling her family that she would not be going to nursing school after all, because “there were words in the chemistry syllabus I couldn’t even pronounce…it was like a foreign language.” Ever-eager Jane wanted to help, but Xo clearly did not want that. Alba tried without success to force her daughter to stay the course through a wager on a board game competition (it’s a telenovela). But later, Xo’s husband Rogelio—a persuasive telenovela star—gave her a pep talk, stressing that she could not quit just because it got hard. She decided to keep going. Xo later told Alba she would continue with nursing, even though there’s “so much science stuff I don’t know or understand.”

By season 5 episode 14, Xo had apparently applied to nursing school, but she had some concern about getting in. She distracted herself from waiting to hear about it with “some medical reading.” It turned out she needed reading glasses, which she reported also “make me feel smarter.” Suddenly she spotted a mole on Alba’s skin, and she asked her mother if it was raised: “You have to think FAT – flat, asymmetrical, tricolor – those are the scary moles that need to be checked right away.” Alba was impressed. Later, Xo was trying to relieve Rogelio’s stress about whether his new show would be picked up by a U.S. network. She had her head on his chest, and she said it seemed that his heart was “off rhythm.” He was skeptical, noting that Alba’s mole had turned out to be nothing. But later, Rogelio actually did collapse. He was rushed to the hospital, and later seemed better. Xo reported to the worried family that it had not been a heart attack, but a “lone atrial fibrillation, an electrical problem with the heart likely brought on by stress, but he had a procedure and he’s gonna be fine.” Later, Xo also had occasion to tell the family that all human cells regenerate after seven years, prompting the ubiquitous show narrator to enthuse about how she was “nerding out” so much that he really hoped she got into nursing school. And toward the end of the episode she learned she had been admitted, to the delight of her family.

The show’s final episodes touched only glancingly on nursing. In season 5 episode 16, Xo was nervous about her first day of nursing school. But she ended up loving it, explaining to the family that all her preparation had made things more familiar, and there were other older students, so she did not feel out of place. In episode 17, there was a complication. Rogelio’s show had been picked up by the network, but production would be moving to New York. Xo managed to quickly get admitted to a New York nursing school, faster and more easily than would appear to be likely.

This plotline was generally very good for nursing. It emphasized how challenging nursing school is, and observant viewers would have noted that it is a university program. The messaging about the science course work, the technical health terms, and Xo’s discussion of her family’s health issues, including Rogelio’s heart condition—these all indicated nursing is a serious profession. We suppose some elements may have suggested that you can be a nurse even if you’re not that good at science or academic work. Comments like how the “glasses make me look smarter” are probably not the best look for a real academic achiever. And at a few points, there seemed to be an assumption that Xo would gain entry to nursing school, which is often not so easy these days. The New York element toward the end, where she was able to transfer schools with apparent ease, may have had a similar effect. Still, overall Xo probably did stress enough to indicate that nursing school has real admission standards. And the message that the audience will likely take away is that nursing school is a demanding project, one that is worthy of the enthusiasm that Xo’s highly accomplished family showed for it.

Please share your thoughts about this plotline with show creator Jennie Snyder Urman on Twitter @JennieUrman. We note that Urman is one of the executive producers of Good Sam, a new CBS show focusing on a heart surgeon that looks likely to reinforce the idea that physicians are the only ones who matter in hospital care. So please encourage Urman to remember the importance of how nurses are portrayed on her new show. And please copy us on your tweets @TruthAbtNursing. Thank you!