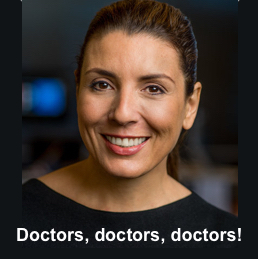 Despite 300,000 Brazilian nurses, NPR thinks Zika care there is all about “doctors”

April 7, 2016 – Today NPR’s Morning Edition aired a long report by Lourdes (“Lulu”) Garcia-Navarro (right), “How to Fight Zika When Your Country Is in Trouble: Improvise.” The piece is about efforts to manage the Zika virus in Brazil during a period of political uncertainty. But it features a barrage of statements by Garcia-Navarro and Morning Edition host Renee Montagne suggesting that physicians are the only type of health professional playing any role in dealing with the mosquito-borne virus, which presents health threats including microcephaly in newborns. The report focuses on the work of a public health official in Recife and two local neuro-pediatricians, Ana Van Der Linden and her daughter Vanessa, who reportedly “first flagged the surge in birth defects in their city” and have been studying it ever since.

The piece credits these physicians for saving lives by using the expensive drug Sabril to treat an extreme form of epilepsy that many Zika patients develop. The NPR report includes statements about what “doctors believe,” how “doctors” are addressing the situation, how “lots of doctors are helping out,” what “we’ve been hearing from doctors,” what “doctors have been telling” NPR, and how the Van Der Linden physicians “acknowledge what’s really holding the system together is doctors like them”—as if modesty made them reluctant to say that but NPR’s fierce investigative journalism made them spill it! But other news reports show physicians are not alone in this work. Indeed, while Brazil seems to have fewer nurses than it needs—apparently fewer nurses than physicians, a huge threat to public health all by itself—there do seem to be more than 300,000 of them. And on February 26, 2016, the Guardian ran a piece by Brazilian Red Cross nurse Rozana Ribeiro about how she and her colleagues go door to door to raise awareness of the virus and how to avoid getting it in the first place. The Guardian piece does not include what “doctors say,” but it also resists pronouncements about what “nurses say.” So while it offers a good quick portrait of a public health nurse saving Brazilians from the virus, it is not a blast of professional deification. The piece also gives a better sense of the long-term social challenges Zika presents, from the difficulties of reducing mosquito breeding grounds to coping with fathers abandoning their families after a baby is born with microcephaly. We thank Ribeiro and the Guardian.

April 7, 2016 NPR piece: How To Fight Zika When Your Country Is In Trouble: Improvise.

February 26, 2016 Guardian article: Tackling Zika in Brazil: ‘There is fear among the people I meet’: Red Cross nurse Rozana Ribeiro believes the problem is far worse than the impression being given by media reports.

The Organisation for Economic Co-operation and Development has Brazillian health statistics showing there are 1.5 nurses for every 1000 people. (The United States has 11.2 per 1000 inhabitants.)

Economist article on the need for more health workers in Brazil