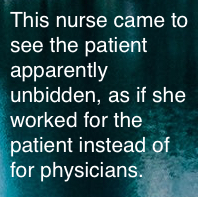 The ABC hospital drama has aired 350 episodes telling the world that only surgeons matter and nurses are clinical clutter, as we show in our new analyses of seasons 12-15. But one brief scene in the 16th season, which aired in November 2019, actually had a nurse provide expert advice to a patient. We urge the show to do more!

December 2019 – ABC’s hospital drama Grey’s Anatomy remains one of the most popular shows on television, and it is now the longest running U.S. prime time hospital show in history, hugely influential on viewers worldwide, including younger ones now watching it on Netflix. During its long run, the show has relentlessly pushed a narrative of hospital care in which only surgeons matter. For the most part, only surgeons provide skilled care, only surgeons talk to patients, only surgeons meet ambulances, defibrillate, save lives. And nurses tend to be peripheral subordinates who may appear occasionally to hand an object to a physician, to look panicked, or to absorb a command, perhaps chirping “yes, doctor!” The nurse characters don’t even get to do the nursing—surgeons do patient monitoring, advocacy, education, psychosocial care. Check out our new analyses of seasons 12, 13, 14, and 15. But in season 16 episode 7, which aired last month, a nurse character did appear, seemingly out of nowhere, to deliver some expert information to an anxious patient about her condition. The nurse did so sensitively and in understandable terms, displaying a remarkable approximation of how a nurse might actually do that, while a surgeon stood quietly nearby. Then the nurse was gone, without getting a name and seemingly never to return. But still: Grey’s Anatomy? More of that, please. We urge the show to start having more nurse characters at least do the actual nursing. Please join us!

Episode 7 of season 16 conforms almost completely to the prevailing Grey’s approach, with a dozen surgeons providing all significant care to hospital patients. But in one plotline, a pregnant patient has come to the hospital after falling down. Apparently she became faint as the result of trying to abort her fetus through an herbal method. Now, after the surgeon Owen has operated to address her injuries from the fall, the patient has chosen to have an abortion through medication, and the surgeon Amelia is talking with her. Suddenly, a pattern-scrubbed female nurse with an RN badge enters, bearing a tray with a couple pills for the patient to take. The nurse character is confident, sensitive, and pleasant.

Nurse: Cassidy, the doctors said the labs and imaging showed an 8-week pregnancy, so you’re all clear.

Patient: So that’s it, just the pill?

Nurse: Two pills actually. You’ll take one medication now to block the hormones that keep the pregnancy viable and a second one in 24 hours to help contract the uterus. You’ll feel nauseated and crampy, probably emotional, because hormones. And it will be difficult when you’re passing the tissue. A lot of doctors say it’s like a heavy period, but it’s more than that. It’s completely safe, I just want you to be prepared.

The patient thanks the nurse and she leaves. Amelia tells the patient that she’ll need to schedule a follow-up with an OB physician. Amelia and Owen get more serious thanks from the patient.

But still, wow, how did this happen? It’s like for this half minute, the show just turned things over to some women’s health advocate who was unaware that on the show, reality always has to be bent to serve the notion that all health care runs through surgeons. This nurse came to see the patient apparently unbidden, as if she worked for the patient instead of for physicians. And she proceeded to behave as if she knew something about health care and had the temerity to convey it directly to a patient. She also displayed empathy, focusing on how the patient would likely feel after taking the drugs, and even overtly disagreeing with what she presented as some physicians’ tendency to understate the severity of the effects of the procedure on the patient. This is good patient education and psychosocial care, and it is just the kind of thing that nurses are more likely to do.

We suppose the nurse might have introduced herself by name—actually it would have been nice if we had heard her name at all—or given some contact information, in case the patient needed any follow-up from her. And related media shows that some viewers will assume this character is a physician, despite all evidence to the contrary. That is likely because Grey’s has trained its viewers for so long to assume that anyone who displays expertise and authority in the clinical setting must be a physician. We can’t do much about that kind of perception right away.

But what we can do, together, is encourage the show to start with this scene and build on it, so that going forward, the public might start to see nurses as actual health professionals. Join us!

Click here to go to our Grey’s Anatomy petition!
Thank you!